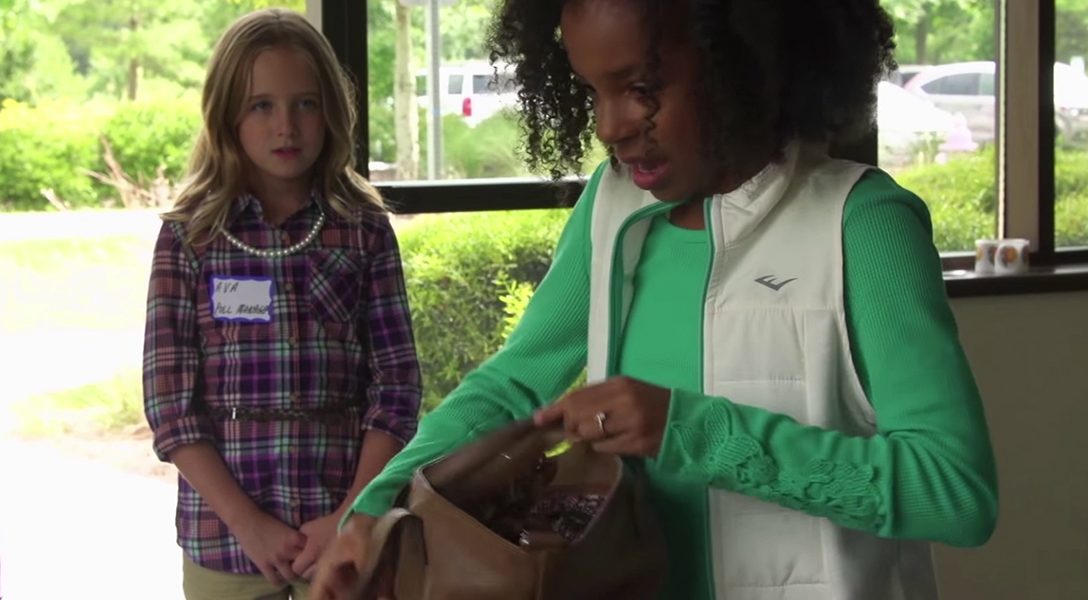 The music is cheery, the narrator, enthusiastic. “Advance Voting: brought to you by the next generation of voters,” the title announces. “Next generation” means children. Get it? Child actors, in this 2016 video posted on Georgia Secretary of State Brian Kemp’s website until Thursday morning, are here to show you how in-person, early voting works.

But the result has inflamed grown-up academics and activists alike, who call the images racist and deceptive. The video is another in a series of recent events that critics say point to Georgia’s elections being designed to produce different results for different voters, depending on their race or ethnicity. The state, meanwhile, says the criticism is “politically motivated.”

The problems begin 35 seconds in, when we see a white boy in a blue polo shirt and khakis open the door to a polling location, greeted by a white girl in a purple-checked shirt. He proceeds to vote and everything goes smoothly for the white boy. He proudly slaps the “I Voted” sticker on his chest.

Next up is a black girl in a green shirt and white ski vest, who is greeted by an apprehensive stare from the purple-checked poll worker. Turns out, the narrator explains, she doesn’t have a valid ID. But, he continues, she can cast a provisional ballot, and return within three days to validate her identity.

At the end of the video, part of a series of four videos produced in six languages and posted on the Secretary of State’s website for the last two years, bold red letters announce “English Only” — referring to ballots and other election materials in the 2016 elections. Since then, Gwinnett County, Georgia’s fastest-growing, has exceeded the federal legal threshold for populations who speak languages other than English, and is offering materials in Spanish for the first time this election.

As this video surfaced on social media late Wednesday, outrage over the racial division represented — the white boy smoothly sails through the polls, while the black girl is missing required ID and has to put more time and effort into casting a ballot successfully — plus the outdated information about “English only” ballots, has caused outrage.

“If you use a white boy who has appropriate ID, that sends a message,” he continued. “Anyone putting together this instructional tape should be conscious of these things … It’s one more instance of trying to suppress voters, under the guise of being instructional.”

“I’m not sure you can find a more explicit attempt to deceive voters and depress turnout particularly among black and brown voters,” wrote Charlton McIlwain, NYU professor of media, culture and communication, in an email. “White voter enters and is greeted with smiles, goes right to a voting booth, successfully casting a ballot. Meanwhile, a black voter enters, greeted by somber faces, and runs into a problem.”

The goal, he wrote: “Kemp is banking on enough black voters questioning their right to vote, being frustrated that they may have to validate their citizenship standing, realizing that their attempt to vote will likely take much more time. He hopes that will be enough to motivate these voters to say it’s not worth the trouble, or believe that their vote will not count anyway.” As for the message at the video’s end — “English only” — the state should never have left the video on its website for the past two years, Boone said — especially after Gwinnett County, with 21.2 percent Hispanic population, announced its plan to print ballots in Spanish. “Any well-run state office should review these things,” he said. “The Secretary of State should have known better than to leave that up.”

Activists on the ground in Georgia were equally concerned. “This video exemplifies the consistent bias associated with Secretary Kemp and his racist campaign for governor,” wrote Phyllis T. Blake, Georgia NAACP president, in an email. “Our major problem with Kemp lies in his attempt to disrespect and suppress the Black vote and his refusal to process 53,000 voter registration applications,” Blake added.

She was referring to voter registration applications being held up due to the lack of an “exact match” between signatures on different official documents, or other mismatching information. The majority of those applications belong to minorities, according to an AP report. Other voting concerns exposed in recent weeks include Gwinnett County rejecting absentee ballots at a higher rate than the rest of the state, as WhoWhatWhy reported.

Kemp’s office removed all four of the videos from the site Thursday morning because “they contained outdated information,” according to Spokeswoman Candice Broce. The videos were also removed from YouTube.

As for whether the video in question contained racist imagery: “Attacks on this educational initiative are sad and politically motivated,” Broce wrote in an email, adding, in another email, “Has anyone mentioned to you that a companion video shows an African-American boy voting a regular ballot on a voting machine?”

Also, she wrote, “Leading up to the 2016 presidential election, the Secretary of State’s office created a series of educational videos to enhance minority participation. It worked. Minority participation is up 23% in Georgia.” Asked how the state could attribute increased minority registration and “participation” to these videos, and not, say, population increases, competitive races, or nonprofit organization efforts, she replied, “I’m not sure why you’re taking what I said that way,” and then added, “We engage in proactive voter outreach efforts across the board.”

So is the video tone deaf or is the outrage overblown? You be the judge and let us know in the comments.