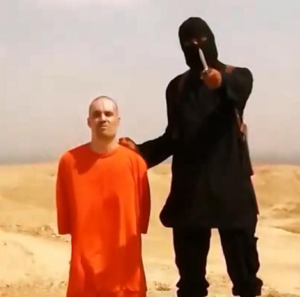 James Foley’s beheading made him into something no journalist wants to be: a part of the story.

Not only has his murder by ISIS terrorists made him part of the story, it has made the freelancer for GlobalPost a central figure in the story about America going back to war in Iraq.

In what has become a grim kabuki theater since the beheading of Daniel Pearl by al-Qaeda, Foley’s death was apparently recorded in high definition and broadcast globally on social media.

Now the question of whether Foley’s killing was staged for the cameras has arisen, the suggestion being that his murder took place off-camera. The analysis holds that his apparent beheading by a British-accented jihadi was merely a show. The big question is why, and why would that matter?

Let’s start off with one major premise that those stories missed. Foley’s death was absolutely staged for the cameras. The very nature of terrorism is that it is staged. What separates ordinary barbarity from terrorism is that the latter is by definition a gruesome performance art.

Terrorism is about headlines.

So why would ISIS fake it? Firstly, and it’s only speculation, is the possibility that Foley and his killers struck a deal: He reads their message to America clearly for maximum impact and plays along with the cameras in exchange for a quick death later.

What does ISIS gain from that? A huge propaganda victory that grabs the attention of the Western, and particularly, American, media. If they did negotiate a “humane death” in exchange for getting their message out, then it represents a whole other level of sophisticated evil. Ordinary terrorists operate in absolutes and don’t usually negotiate with a focus on perfecting their propaganda.

The sad part is that Foley is another victim in the post-9/11 war. He is perhaps even the victim of a second-generation jihadi, the son of a man involved in Osama Bin Laden’s bombings of the U.S. embassies in Kenya and Tanzania in 1998.

There is still a spate of coverage about his killing, including the analysis of his video, enduring and questionable criticisms about how freelancers like him face risks that staff journalists for big companies don’t, and the typical post-event questions about how President Obama handled the situation. There is even a debate on whether the U.S. should follow its European counterparts in paying ransoms to terrorists.

All of this ignores an elemental question about the news coverage of Foley’s deaths and others like his.

If terrorists derive power, propaganda value and even recruiting strength from the publication and media coverage of their atrocities, then are journalists who cover their unfortunately newsworthy atrocities encouraging the very people who target them for death?

Correction: The original posting incorrectly listed the date of the US embassy bombings in Tanzania and Kenya. The date is now correct.