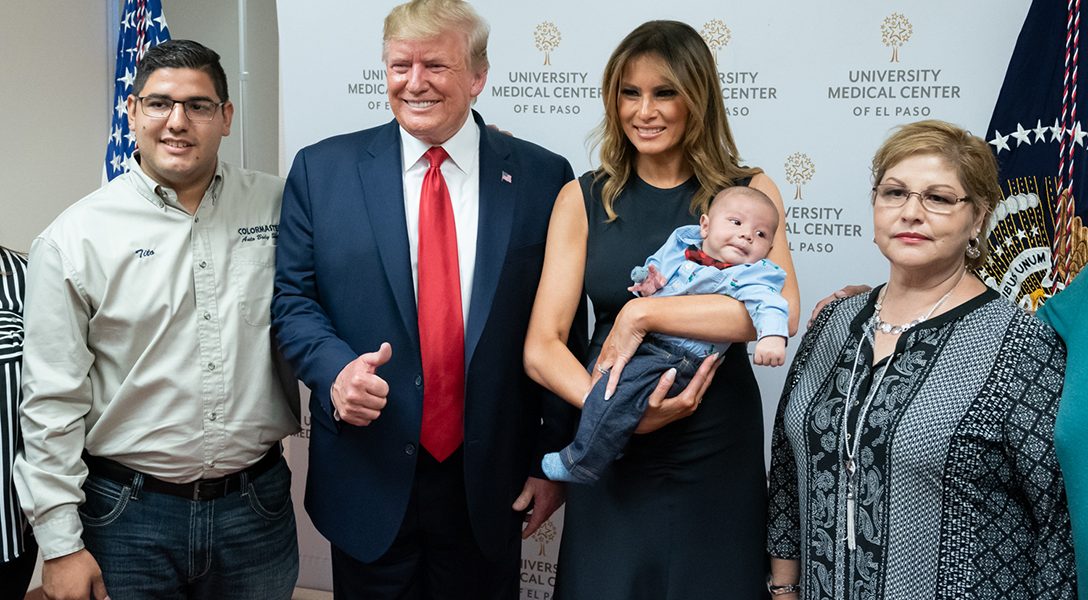 First Lady Melania Trump holds the two-month-old son of Jordan and Andre Anchondo, as she and President Donald Trump pose for photos and meet members of the Anchondo family, Aug. 7, 2019, at the University Medical Center of El Paso in El Paso, Texas. Jordan and Andre Anchondo were among the 22 people killed in a mass shooting Saturday at a Walmart in El Paso. Photo credit: The White House / Flickr

Whether It’s El Paso or Someplace Else, for Trump, Only Size Matters

President Donald Trump’s condolence trip to El Paso turned out to be a perfect bookend to his inauguration. Incredibly, after two and a half years in the White House, the man remains as obsessed by crowd size as he was on his very first day.

As you might have seen, during his visit on Wednesday Trump stood in the El Paso hospital where the mass shooting victims were still being treated, talking about the size of his crowd several months before at his rally in El Paso. He said presidential candidate Beto O’Rourke had drawn only 400 or some such, and led those around him in derisive laughter.

I bring this up because that day has been misrepresented from the start by the national press. I was listening to political commentator John Heilemann explain that he had been at O’Rourke’s rally that day, and that the crowd had not been 400, or even 4,000, but more like 10,000. But somehow Trump had sucked up all the media oxygen so that no one really noticed or cared at the time. Thus no one ever had the correct impression that O’Rourke’s audience had been that large. There was no panoramic photo of the occasion, as there was to prove that the crowd at Barack Obama’s inauguration was larger, to expose Trump’s lie.

It was, and remains, just another failure of the national media.

But truly, this thing about crowd size, hand size, golf handicap, TV ratings, and his huge election win, is one of the sickest of Trump’s many mental deficiencies, and there it was on display, just yards from people in their hospital beds, fending off pain, still oozing blood and gore, struggling to breathe, clinging to life, and looking forward to months if not years of therapy, surgeries, and disabilities, as their president demeaned and politicized the occasion, thumping his chest, bragging, and laughing.

And then there was the photo of him giving the thumbs-up sign and grinning next to an infant who had lost both of his parents in the El Paso tragedy. That image and the video provided stunning visuals that show who Trump really is: a human being who cares about nothing and nobody but himself.

This has been an amazing week. I believe the level of anger toward Trump has reached new levels, and may stay at new levels.

Obviously, there have been many such moments in the past three years, but I think this time something has shifted in the universe.