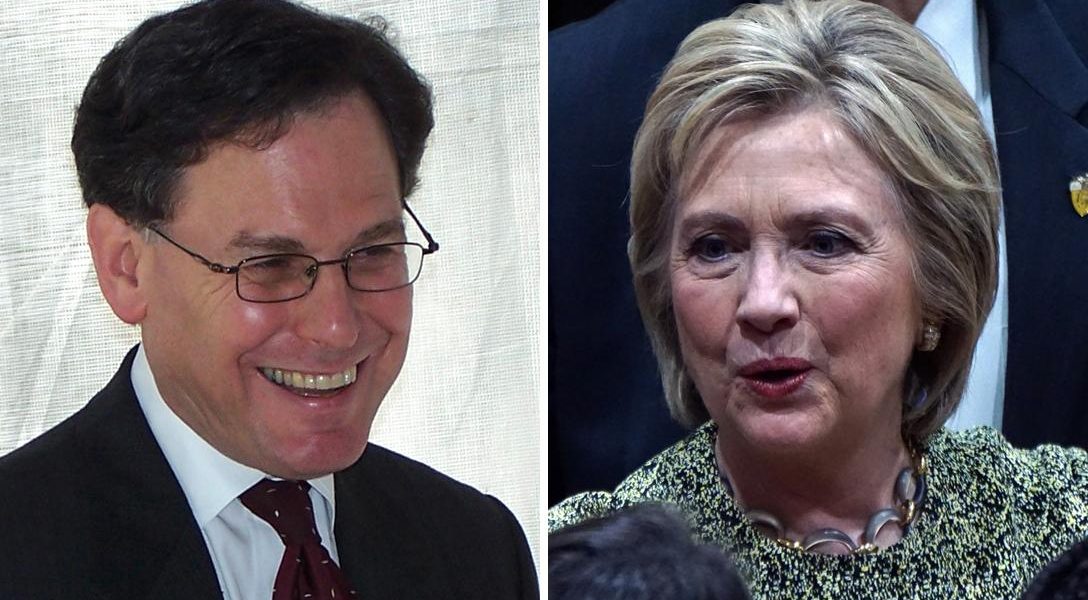 As we head into the home stretch of the presidential campaign, ever-greater scrutiny will be directed at the candidates, their policy decisions and their political and personal connections. While both the war in Libya and Hillary Clinton’s handling of her private email server have been a focus of the media since the primaries, little has been made of how her emails shed light on the build-up and ultimate failure of the war in Libya.

At the center of those emails is Sidney Blumenthal, a longtime Clinton ally and aide.

Though it is not clear that any of the emails sent between them suggest illegal conduct, their correspondence raises serious ethical concerns — including the possibility that Blumenthal was pushing Clinton to support a war whose pursuit might end up benefiting him financially.

A Taste for Conspiracies

Blumenthal got his start in politics campaigning locally for John F. Kennedy in 1960. He left Chicago to attend Brandeis University, outside of Boston, and while there joined the anti-Vietnam war group Students for a Democratic Society (SDS). After graduating, he became part of the circle of progressive journalists emerging in the Boston area in the 1970s.

He spent much of his career writing for The Washington Post and The New Yorker. He met the Clintons in 1987, but did not join the Clinton administration until Bill Clinton’s second term in 1996.

Over the years, Blumenthal was known for two things: his books about conspiracies behind the assassination of both President John F. Kennedy and Martin Luther King Jr. — and his loyalty to Bill and Hillary Clinton.

In 2003, he wrote a book claiming that the Clinton White House had been the victim of serial right-wing conspiracies. Reviewing the book for The Nation, journalist Tom Wicker said it could sometimes be “detailed and fascinating” but failed to provide any dispassionate or objective account of the Clinton years. Blumenthal has remained loyal, and Hillary Clinton’s emails reveal that she remained close to him throughout her years as Secretary of State.

Those emails suggest that Blumenthal’s unsolicited advice to the Secretary of State may have been motivated in part by his financial ties to a company that stood to benefit from US intervention in Libya.

Although Blumenthal was denied a spot on Clinton’s staff after President Obama named her Secretary of State, he continued to serve the Clintons in other capacities.

He was paid $120,000 a year by the Clinton Foundation, the Clintons’ international charity. And he worked as a paid consultant to David Brock’s media watchdog group, Media Matters, which monitors rightwing media for accuracy and ethics. The once rightwing, anti-Clinton Brock underwent a political “conversion” in the late 1990s, and recanted all the anti-Clinton articles he had written in the previous decade, claiming he’d been deceived. In fact, it was Blumenthal who had recruited Brock to join the Clinton team in the 90s.

Still, Blumenthal’s relationship with Hillary Clinton while she was Secretary of State had little to do with charitable giving or the media, as his work with the Clinton Foundation and Media Matters might suggest. Instead, it seems that Blumenthal took on a new role with the Clintons, as a kind of foreign policy advisor, or, as ProPublica characterized it, as the head of a “secret spy network” for Hillary Clinton.

What qualifications did Blumenthal have to be a foreign policy advisor? Rep. Trey Gowdy (R-SC), the chairman of the House Select Committee on Benghazi, asked Clinton that question: “We have a CIA, so why would you not rely on [the government’s] own, vetted, sourced intelligence agency?”

But Blumenthal had another reason to offer advice. He reportedly had financial ties to a military contractor that could profit from US engagement in Libya. What those ties were is difficult to define. Blumenthal has described himself as an “honest broker,” trying to bring Libyans together with defense contractors, according to Gowdy.

Specifically, Blumenthal might have benefited, through a kind of “finder’s fee,” if a company called Osprey Global Solutions got a contract in Libya. Osprey, which provided security, weapons, training and intelligence for countries and companies, was trying to line up contracts from the new Libyan government and the US. In lobbying Hillary Clinton to get the US involved in the war in Libya, Blumenthal was also, in effect, lobbying for Osprey to profit from the war.

In July of 2011, Blumenthal sent Clinton an email titled “TNC,” referring to the opposition government in Libya that opposed longtime Libyan leader, Muammar Qaddafi. In the email, Blumenthal let Hillary know about Osprey.

“You should be aware that there is a good chance at the contact meeting in Turkey the TNC ambassador to the UAE, a man you have not met, whose name is Dr. Neydah, may tell you the TNC has reached an agreement with a US company.

The company is a new one, Osprey, headed by former General David Grange, former head of Delta Force, Osprey will provide field medical help, military training, organize supplies, and logistics to the TNC. They are trainers and organizers, not fighters. Grange can train their forces and he has drawn up a plan for taking Tripoli (the capital of Libya) similar to the plan he helped develop that was used by the first wave of Special Forces in the capture of Baghdad.

This is a private contract. It does not involve NATO. It puts Americans in a central role without being direct battle combatants. The TNC wants to demonstrate that they are pro-US. They see this a significant way to do that……

The strategic imperative: Expecting Qaddafi to fall on his own or through a deus ex machina devolves the entire equation to wishful thinking. The TNC has been unable to train and organize its forces. The NATO air campaign cannot take ground. The TNC, whose leaders have been given to flights of fancy that Qaddafi will fall tomorrow or the day after, have come to the conclusion that they must organize their forces and that they must score a military victory of their own over Qaddafi that is not dependent solely on NATO in order to give them legitimacy.”

One day after Blumenthal sent the email, Hillary Clinton recognized the TNC as the legitimate government of Libya, and pledged $30 billion of Libyan assets seized by the American government to the Libyan rebels.

On March 2011, 11 days into the NATO bombing of Libya, Blumenthal sent an email to Hillary Clinton titled “Win The War.” In the email he listed the motivating factors for a US interest in overthrowing Qaddafi.

“The positive case for national interest in terms of removing Q(addafi), establishing stability in North Africa, security democracy in Egypt, economic development, effect throughout Arab world and Africa, extending US influence, counterbalancing Iran the humanitarian motive offered is limited, conditional and refers to a specific past situation”

Blumenthal ended the email “Read the poll. Win the War. No Way Out” and went on to stress how important defeating Qaddafi could be to Obama’s 2012 reelection. To be fair, in other emails in February and March 2011, Blumenthal let Clinton know some of the risks of intervention. Both Blumenthal and Clinton received information that pointed to the chance that outside intervention might tip Libya into the chaotic and violent state it in fact became after the fall of Qaddafi.

Islamist activity: Libya’s Islamist activists have maintained a low profile since the start of the insurgency in late February; fearing that their activities would give credence to Qaddafi’s claims that the rebels are terrorists. As the LNC is taking shape, they are now working to make their voice heard, and influence events within the LNC. Ali Sallabi, Salem Al Shiki and Mohamed Al Guirtili, leading Islamic figures who had taken refuge in London (and are close to the Moslem Brotherhood), drafted a “national pact” which looks like a road map for organizing the role of the Islamist movement in the transition to a post — Qaddafi Libya……

Traditionally, the eastern part of Libya has been a stronghold for radical Islamist groups, including the al Qaida-linked Libyan Islamic Fighting Group. While Qaddafi’s regime has been successful in suppressing the jihadist threat in Libya, the current situation opens the door for jihadist resurgence. Egypt has a growing interest in keeping a close eye on jihadist movements in eastern Libya. This is especially true as the Egyptian Military is already concerned about Islamist militancy overflow from Gaza, after their forces were pulled back to Cairo during the uprising against Mubarak.”

It is also clear that Blumenthal and Clinton had information that the “rebels” they supported were dangerous and a threat to Black Africans in Libya. In an email from February of 2011, Blumenthal wrote:

At the same time, a number of these foreign troops have fallen into the hands of demonstrators and been killed, with their bodies set out for public view. There have also been  instances where Africans not involved in the fighting have been attacked and killed by the demonstrators.

In his emails to Clinton, the onetime anti-Vietnam-War activist and critic of the CIA, consistently took a hawkish position. Before the US began pushing the UN to sanction a no-fly zone in Libya, Blumenthal advised Clinton to back such a proposal. And Blumenthal pushed Clinton to arm the rebels, even advising her to provide them with armor-piercing bullets.

In the end, the West’s intervention in Libya left the country in a humanitarian crisis and destabilized North Africa, with multiple militias and jihadists spilling over from Libya to neighboring countries like Tunisia. More than a thousand civilians were killed in the NATO airstrikes and thousands more died in the civil war.

But in the first flush of victory, Blumenthal rushed to congratulate Clinton and urged her to take credit for the Libyan war — which Obama later called the “worst mistake” of his presidency. In August 2011, a month before Qaddafi was killed, Blumenthal sent the Secretary of State an email that contained the following paragraphs:

“First, brava! This is a historic moment and you will be credited for realizing it. When Qaddafi himself is finally removed, you should of course make a public statement before the cameras wherever you are, even in the driveway of your vacation house. You must go on camera. You must establish yourself in the historical record at this moment……

Do not skimp on the reasons in the US interest behind the successful strategy: We prevented a humanitarian tragedy on a vast scale. Qaddafi, who had already killed 2,000 people in April, threatened to massacre the residents of Benghazi, tens if not hundreds of thousands of people….

We have supported the legitimate aspirations of the Libyan people for democracy and freedom. We have ousted a murderous dictator who has been a source of terrorism, civil war throughout Africa and a prop for dictators elsewhere. By acting in Libya we have helped advance the cause of democracy and freedom throughout the Arab world. We have provided an important support for neighboring Egypt. We have put Assad on notice that the sands of time have run out for him as well. Our successful strategy in Libya stands as a warning that our strategy will work again.

This is a very big moment historically and for you. History will tell your part in it. You are vindicated. But don’t wait, help Clio (the Greek goddess of history) now.”

Following Blumenthal’s advice, Hillary Clinton did indeed take credit for the Libyan war and the eventual murder of Qaddafi on camera, telling a reporter gleefully, “We came, we saw, he died.” When the reporter asked if Qaddafi’s death had anything to do with her recent visit to Libya, she replied, with a laugh, “No…I’m sure it did.”