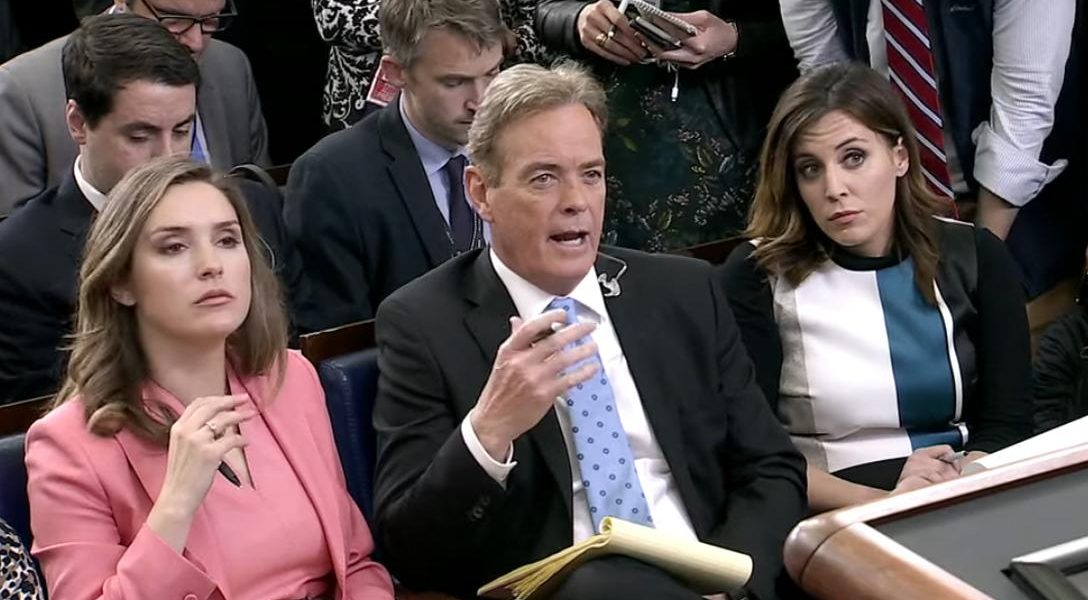 To listen to the reporters who cover the White House, February 24 remains a day of infamy. For them, it seemed to mark a tipping point in their struggles with President Donald Trump, who has declared the media “the enemy.”

That was the day that press secretary Sean Spicer decided to replace a scheduled press briefing with a more informal event in a smaller venue, and to exclude certain reporters, among them those representing The New York Times,the Los Angeles Times, CNN, the BBC, the Guardian, Politico, Buzzfeed, and others.

The journalists did not take this decision well.

“We were all stunned by it,” said New York Times Washington bureau chief Elisabeth Bumiller.  “I knew it was a big story.” She rushed to get a story up online. “It got huge readership,” she said.

Bumiller’s reactions were echoed by other members of the White House press corps who spoke on March 7 at a conference co-sponsored by the National Press Club and the University of Missouri School of Journalism.

The journalists spent much time dissecting what happened, and listing the media outlets that refused to attend the briefing — for example Time magazine and the Associated Press —  in solidarity with their excluded colleagues. Reuters correspondent and White House Correspondents’ Association (WHCA) president Jeff Mason said that even more outlets would have boycotted the briefing if they had known about the hours of WHCA negotiations over the briefing with Spicer that preceded it.

None of the reporters mentioned the other news event of that day. Trump signed an Executive Order designating teams at each federal agency to make sure agencies cut regulations, potentially jeopardizing public health and safety and the environment.

That omission seemed emblematic of the four-hour program, which focused less on the public implications of Trump’s relationship with the media, and more on how it affects reporters personally.

They both expressed sympathy for Spicer, particularly when he is asked about the veracity of Trump tweets, like his claim that Obama had wiretapped his phones.

“I feel for him. He’s in an awkward spot. The boss said something outside our agreed-upon levels of deceit,” Rogers observed, explaining that politicians or administration officials are forgiven if they call an unproductive meeting productive, or assert confidence when they lack it, but that a wiretap accusation is different.

McCurry said Spicer was right to state that “the president believed” what he claimed in the tweet, and to refuse to say whether he personally believed that allegation.

Rogers thought the tweets did not represent “artful distraction” but rather “impulsiveness at the top,” combined with the growing pains of a new administration. “The message discipline has not been honed,” he said.

“I can’t speculate if they are sending out rabbits to divert,” McCurry said, adding that while Trump’s loyal supporters may like his rhetoric, “I don’t know how you govern with that.”

“The press is a good ‘bad guy’ for Republicans,” Rogers added. “It’s not an unreasonable short-term strategy.”

But Rogers agreed with McCurry when he contended that that strategy also “happens to be dangerous.”

If Rogers and McCurry think of the Trump White House as amateurish, the White House press corps seems to treat the president as the abusive spouse they cannot leave.

Trump’s tweets rob them of sleep on early Saturday mornings and disrupt their weekend plans. He offers them access, and then arbitrarily shuts it off — or plays favorites — excluding some media outlets, particularly those that have not been friendly.

The journalists, whom Trump has repeatedly attacked and called “the enemy,” try to read his mind, with some attributing his actions to “fear” and others to lack of discipline. Some journalists believe the attacks on the press are both strategic and intentional, aimed at reducing public trust in the fourth estate. White House Press Secretary Sean Spicer contends that the Trump plan for health care, the smaller stack of paper, is better because it is not as voluminous as the Obamacare bill.
Photo credit: The White House / YouTube

To their relief, the March 3 event did not presage a total White House exclusion of reporters from unfriendly media outlets. The Trump White House continues to permit all correspondents on Air Force One and to provide access to administration officials, reporters said.

Mizell Stewart III, a Gannett executive and president of the American Society of Newspaper Editors (ASNE) said that Trump’s actions reminded him of the former mayor of Akron, Ohio, who routinely “cussed out anyone who crossed him.” The Trump White House, he said, “is not a group who understands the norms of Washington.”

But Washington Post media columnist Margaret Sullivan contended that labeling the press as the enemy “is a strategy and it is intentional. This is a technique to set up the press as the bad guy, and it works. It’s showing up in polls.”

Reporters also are acutely aware of the tsunami of Trump statements that are not true, but the discussion focused less on the problem of false information from the president, and more on what to call it. Most fact-checkers and news outlets rarely use the term “lie,” because that charge implies intent.

On January 23, however, the Times inserted the word “lie” in a headline about Trump’s claim that millions of undocumented immigrants had voted in the 2016 election. “That was Dean’s [managing editor Dean Baquet] call,” Bumiller said. Trump went on to repeat that claim even after it was proven false. Perhaps not surprisingly, Fox News White House correspondent John Roberts and Major Garrett, who jumped from Fox News to CBS News in 2012, tended to go a bit easier on Trump. They insisted that the Obama Administration’s actions could be as bad as or worse than Trump’s rhetoric.

Garrett said that his stint covering Obama for Fox was “the most stressful period of my life,” although Obama officials, while considering themselves at war with the network, made a point of telling him that “we don’t mean you.”

Garrett charged that investigative reporters James Risen and James Rosen both had been hounded by the Obama Department of Justice (DOJ), after writing stories and books on national security that depended on whistleblowers and other confidential sources.

“I bet that James Risen would take a Trump insult over seven years of DOJ harassment,” Garrett said.

Whatever the administration’s motives, or the unpredictability of the president, panelists agreed that the only way the media could adjust is to do its job, as thoroughly and energetically as possible, because the American public demanded that.

Good journalism is “indispensable to the public,” observed Tom Rosenstiel, author, journalist and executive director of the American Press Institute. “But if people are in denial about facts, that is not a trivial thing. We can do our jobs and miss the [larger] point. The press has to realize they’ve lost resonance.”

He pointed out that millennials as well as Republicans have very little trust in legacy or mainstream media. “They’re not brand-oriented.”

People don’t necessarily rely on mainstream media to report the news first or to regulate the flow of information, Rosenstiel said. “We’re now less the gatekeepers and more the annotators of what the public has heard.” In this era, he stressed, reporting is “more about evidence than narrative,” meaning that facts, rather than storytelling, should take precedence.

He urged reporters to strengthen their credibility by clearly labeling their work. “Labels are important,” he said, suggesting that news reporting, news analysis, and opinion pieces be carefully identified for the reader.

A lot is at stake, Rosenstiel said. He said that facts are what distinguish “a nation of laws” from one controlled by an authoritarian ruler. In a democracy, he added,  it is essential that “we accept the facts. Rulers say, ‘Don’t believe the facts, believe me.’ ”

Although the struggle between the Trump White House and journalists may be “existential,” Rosenstiel warned that reporters must guard against “becoming too emotional.”

“Calling us the enemy is a challenge but also a trap,” he cautioned. “We must be clinical and professional.”