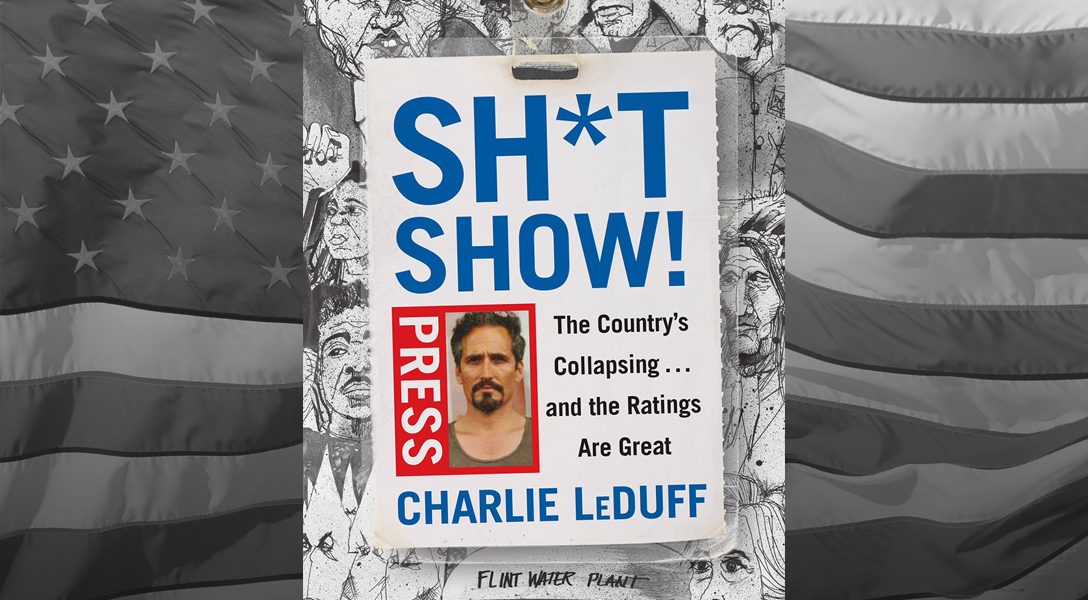 Sh*tshow!: The Country's Collapsing . . . and the Ratings Are Great, by Charlie LeDuff. Photo credit: Tomasz Krawczak / Flickr (CC BY 2.0) and Penguin Press

The Insanity of Daily Life in America

“David’s Bookshelf” is a new feature for WhoWhatWhy readers. David Wineberg, popular for his insightful and entertaining reviews online, will present new works of nonfiction and offer his thoughts and commentary on these books, whose topics we believe will be of interest to many of our readers.

The views expressed in these reviews reflect those of the author and not necessarily those of WhoWhatWhy.

Reporters are privileged. They get to talk to people in the street and at their homes. No one else can do that. They get to query politicians and corporate executives. They get to talk to the actors in standoffs, protests, and riots. They visit people 20 years after their 15 minutes of fame in some crime or incident. They find out things that others can’t even imagine. And they have a platform to tell the world about it all.

Unfortunately, television news reporters like Charlie LeDuff then distill it down to a formulaic minute and a half, glossing over the truth and featuring any sort of violence as the main point (“If it bleeds, it ledes”). So the real truth doesn’t necessarily make it to air. A longer-format show allowed him to fill in those details.

Shitshow! follows him all around the country over the three years of the show. It made him into a war correspondent.

LeDuff describes himself as a “street reporter… The story was and always will be the American people scratching it out from Ferguson to Flint.” He proposed a series to Fox, his employer, that would be broadcast by its 18 owned major-market stations (as opposed to a cable network), and would focus on what was happening across the country at street level. He called it The Americans.

He found all kinds of commonalities on the street, including racism, frustration, boredom, and above all poverty. The middle class had been melting away, as decent paying jobs became minimum wage (or less). Americans clashed once again along racial lines, but it was poverty that put them in that position. Even in North Dakota, where stories of fracking fortunes drew thousands north, he found pathetic poverty. Yes, some were making $100,000 a year. But they were working the equivalent of three jobs to do it. And their expenses were enormous, as everyone wanted a cut. And then there was government.

Governments had betrayed everyone too many times to ever be trusted again. They cut civil servants’ pay, crippled them with taxes, rolled back their pensions, took away social programs, robbed their tax dollars, kneecapped their unions, and even poisoned their water. And if that weren’t enough, governments, in the form of police, were shooting at them.

LeDuff dug deep. And he was persistent as well as creative. He got his stories, often at great risk to his own life and the lives of his cameramen. He got into Cliven Bundy’s camp, and made it into Reynosa, Mexico to talk to would-be emigrants. He was in Ferguson for the riots. And all the time, he was battling his employer Fox — which was redirecting his efforts, denying his expenses, and calling him off when political pressure was applied. It was a race against not being able to complete the task. He quit the night Donald Trump was elected, and began writing this book.

LeDuff is perceptive. On union-busting states, he points out there are only four non-union Volkswagen plants in the world: China (2), Russia, and Tennessee. Hypocrisy is a way of life in the USA. The everyday corruption is depressing. And Americans’ views are at best suspect: “The American is generally poorly instructed in his own history, not because it is especially difficult to learn, but rather because it is difficult to hear.” It all forms part of the “shitshow” he sees everywhere.

“The story was and always will be the American people scratching it out from Ferguson to Flint.”

For a working definition of a shitshow, there is the story of a Detroit police sergeant, shot trying to stop a mad killer. In 20 years, he had never fired a shot on duty, and was both highly respected and effective. The police “brotherhood” and politicians took over his funeral and made the usual big deal of it, but his widow still had to pay for it. They promoted him posthumously to captain, but did not give the family a captain’s pension or benefits. They magnanimously extended his healthcare for the whole family, including his five-year-old son, but only for five years. Then they were on their own. That’s a shitshow.

Interestingly, while LeDuff looks like a Sean Penn, and writes like a Damon Runyon, he is actually largely black. He has a hard time filtering all the prejudice he sees, and is plainly disgusted with politicians as an entire class. The book is as breezy as his speech — street-level straight talk, and salty. It’s a reading pleasure that makes the content easier to take.

There is a running joke, at the expense of both Fox and officious security. Everywhere LeDuff went, he inevitably couldn’t complete his reporting without resorting to a fake Press ID he had assembled himself, printed and laminated to look official. It says “News Media Press Official Identification.” He had to kludge something together, because his Fox News employer wouldn’t issue IDs to the news team. It has his name, his photo, and a barcode from a candy bar. It got him past absolutely everyone, and in to see absolutely everyone. Again and again. For years. Another shitshow.

LeDuff is a fine storyteller, a hardworking journalist and an honest witness (with all the weaknesses of honest witnesses). I wouldn’t want him running the country (he actually recommended himself to Trump as VP), but he’s a great one to have on your side.