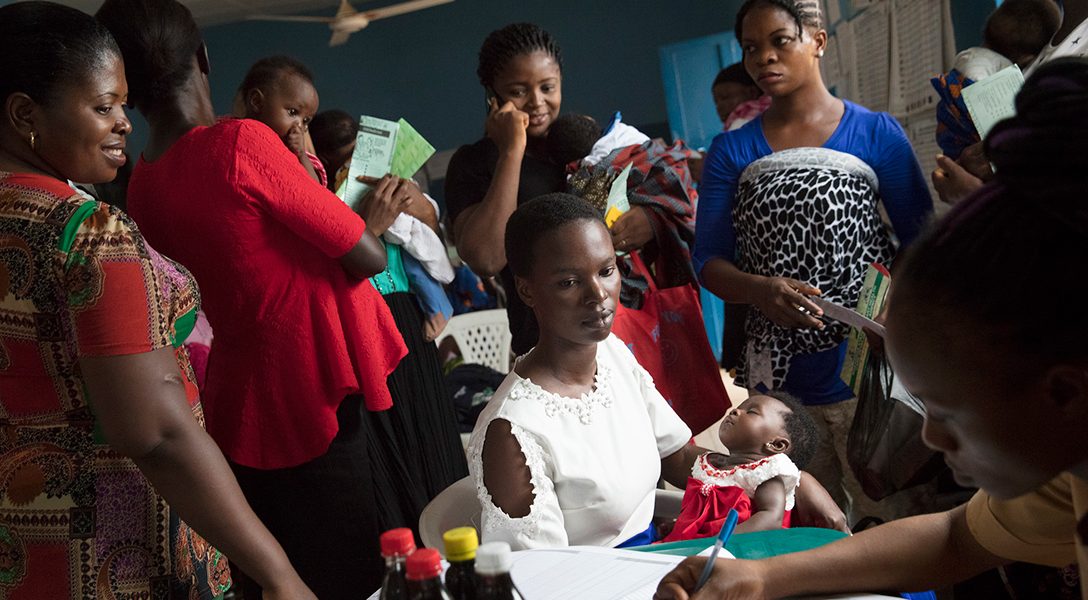 Mothers have their babies vaccinated at the Primary Health Care Maraba, in Karu, Nigeria on June 19, 2018. Sub-Saharan Africa’s population is expected to grow rapidly through the end of the century, according to the United Nations. Photo credit: Dominic Chavez / Global Financing Facility / Flickr (CC BY-NC-ND 2.0)

One of the many avenues taken by business-as-usual, Cornucopian analysts who attempt to downplay alarm bells currently ringing all over the planet is to remind readers of the failures of 18th-Century English economist Thomas Malthus.

Population growth isn’t a problem, they argue in hindsight, for the same reasons that made Malthus’s predictions look increasingly silly over 200 years of near-relentless population explosion.

Bloomberg columnist David Fickling has taken his turn at bat, pointing out that world population growth rates are already stabilizing due to technological advances and higher standards of living. The column clearly resonates with other media giants, as the Washington Post picked up the piece Monday.

Malthus’s predictions that a society’s capacity to feed its growing populations would always hit a ceiling and lead to catastrophe were indeed wrong … for his time. He failed to envision an era where advances in medicine, infrastructure, and agriculture — to name a few — would not only sustain, but accelerate population growth rates. The man’s legacy has been used as a punching bag by many ever since.

Over a longer timeline, however, was Malthus so wrong? Two hundred years later, with global population on the doorstep of maximum carrying capacity, are we already reaching critical mass? Do we have enough affordable energy sources to continue powering our system of mechanized agriculture? Perhaps writers like Fickling are missing a greater point when they offer a sort of “calm down; keep shopping” approach to this long emergency.

A seemingly endless array of challenges created by population growth have placed irreversible strains on our living biosphere. Water scarcity, declining agricultural yields, and wildly accelerating species extinction rates are just a few of the consequences.

Malthus’s key error was his failure to foresee how fertility rates would fall with increasing incomes – and the pace of change on that front has been staggering in recent years.

Fickling mentions nothing about an increasing cost of living today keeping hundreds of millions of Westerners on the outside looking in, but that’s perhaps for another blog.

The exception to this worldwide “fertility decline,” Fickling concedes, is in sub-Saharan Africa, where population is expected to explode and more than make up for the mild drop elsewhere, according to the United Nations Population Division. But wait: He says it’s “plausible” that data is misleading!:

Is that forecast right? There’s reason to think that after overestimating the pace of African fertility decline in previous decades, demographers are now underestimating it. If most countries in the region haven’t started a steep drop yet, it’s plausible that in most cases it’s because most countries have only just hit the sub-five levels at which the process starts to gather pace.

“Plausible” enough to write a column about it and submit it to your editors?

To be clear, “sub-five levels” above refers to less than five children born per woman. We Westerners graduated from 5+ kids long ago, so we’re good. Right?

Same-as-it-ever-was sentiment toward our species’ problems — such as feeding 10 billion people by mid-century — assumes everything will always play out the way it always has. Worse, it dismisses the very real possibility that, while Malthus was wrong for his time, the more dire consequences simply have not kicked in yet.

That is dangerous. Because such dismissal stunts sensible municipal, state, federal, or international policy before it ever starts. Suggesting that market forces are “naturally” working their magic blocks progress. It does this by building policy upon a foundation of misguided assumptions.

Analysis pieces like these in mass media sources of enormous influence reach millions of readers and are cited by politicians at the podium or in press releases when it suits their agenda.

Where does the WaPo link to a counterargument? I’m not seeing it.