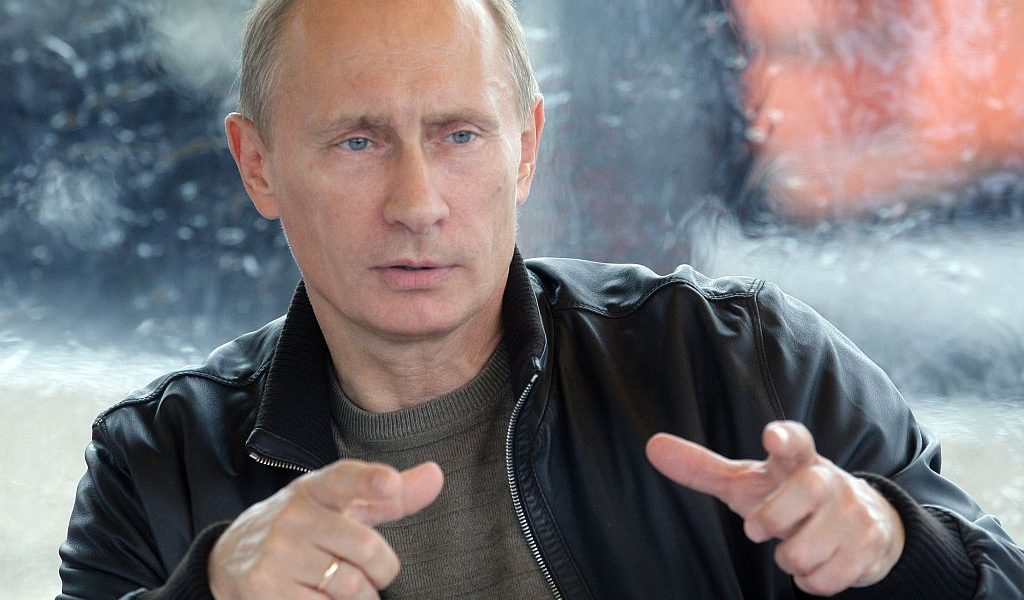 MEDIA FAIL: Is the West’s Coverage of Ukraine a Failure of Nuclear Proportions? “The Ukrainian conflict has gone on far too long, and it has become far too dangerous. There is one man who can stop it — President Vladimir Putin of Russia.”

In the intervening months, the media’s assessment of Putin has only grown harsher, with his actions in Ukraine being seen as a possible prelude to a full-scale Russian invasion, along the lines of his 2008 takeover of two provinces in the nation of Georgia.

But this analysis is dangerously unbalanced.

While Putin has made many missteps in the Ukrainian crisis–and many in Georgia in 2008–the West is far from blameless. If, as the Times asserts, it’s all Putin’s fault, then the U.S. and its allies have few options beyond waiting for him to have a sudden change of heart.

But if the West can acknowledge its own mistakes and start to rectify them, that might point the way to resolving the current conflict before it escalates further, even possibly to nuclear threats.

In considering options, let’s first look at the perception that Ukraine is a repeat of Putin’s land-grab in Georgia. That in turn has been compared to Hitler’s dismemberment of Czechoslovakia 70 years earlier. This analogy, with its hot-button allusion to the West’s appeasement of Nazi Germany at Munich in 1938, was promoted by, among others, former Secretary of State Hillary Clinton.

But in fact, it was one-sided coverage in the mainstream Western media that created the false impression that Putin alone was responsible for the 2008 Russian-Georgian War. Disregarded in this coverage was a finding by European Union investigators that Georgia, backed by the West, had in fact fired the first shots. The EU ultimately found blame on both sides.

In Ukraine, Putin has justified his cross-border interventions as required to protect ethnic Russians from threats by hostile neighbors. His stated concerns may be self-serving, but not necessarily as misplaced as Western governments and media make out.

Key precipitating events are left out of the narrative. For example, Western media barely covered a May 2, 2014, fire in the Black Sea port city of Odessa, where dozens of pro-Russian separatists were burned alive after they barricaded themselves in a government building to escape a violent Ukrainian mob. Ukrainian nationalists surrounded the building, sang the Ukrainian national anthem, and chanted the equivalent of “Burn, Russians, burn!” while the building went up in flames.

An even more egregious failure of American mainstream media coverage in Ukraine came during the February 2014 anti-government demonstrations in Ukraine’s capital of Kiev. When sniper fire killed nearly 100 Ukrainians, Western media repeatedly stated as fact that the shots came from the forces of then-Ukrainian President Viktor Yanukovych, who had tilted toward Russia. Outrage over the deaths fueled calls for Yanukovych’s head, and on February 21 he fled the capital, eventually ending up in southern Russia, where he remains in exile.

But virtually ignored by the American mainstream media was a bombshell allegation by Estonian Foreign Minister Urmas Paet. On Feb. 26, 2014, Paet—no friend of Russia’s—said in an intercepted and later authenticated phone call: “There is now stronger and stronger understanding that behind [the] snipers, it was not Yanukovych, but it was somebody from the new coalition.” What Paet called “the new coalition” is essentially the West-leaning Ukrainian government that succeeded Yanukovych. (Please see the full transcript of the conversation here, the most relevant 48 seconds here, and audio of the entire conversation here.)

In such conflicts, the truth is one of the first casualties.

More recent investigations (including one by German public television) suggest that the sniper fire may actually have come from both sides: from forces answering to the Yanukovych government and from provocateurs among the anti-government demonstrators (The original article is in German, but an English translation is available.)

Of course, if even some of the sniper victims were shot by the opposition, then the narrative provided by the Western media—about the current Ukrainian government’s underdog triumph of democracy over murderous pro-Russian surrogates—needs serious revision.

Overall, European media coverage of the Russian-Ukrainian conflict has been much more balanced than America’s—especially when it comes to highlighting the rise of far-right nativist parties in post-Yanukovych Ukraine.

Ever since Ukraine’s February revolution, the Kremlin has characterised the new leaders in Kiev as a “fascist junta” made up of neo-Nazis and anti-Semites, set on persecuting, if not eradicating, the Russian-speaking population. This is demonstrably false. … But Ukrainian officials and many in the media err to the other extreme. They claim that Ukrainian politics are completely fascist-free. This, too, is plain wrong. …

[Current Ukrainian] President Petro Poroshenko presented a Ukrainian passport to someone who, according to human rights activists, is a “Belarusian neo-Nazi” … praising his “courageous and selfless service”. …

Ukraine’s public is grossly under-informed about this. The question is, why doesn’t anyone want to tell them?

Paraphrasing the last paragraph above, “the American public is grossly under-informed about this. The question is, why doesn’t anyone want to tell them?”

For an American media outlet willing to tackle this issue, one has to turn to The National Interest, a specialized journal on international relations. Although its parent, The Center for the National Interest, was originally called The Nixon Center—hardly a left-wing group—it recently published “Ukraine Exposed: Kiev’s Authoritarianism” by James Carden, who served as an advisor to the U.S.-Russia Bilateral Presidential Commission at the State Department from 2011 to 2012.

From the very start of the Ukraine crisis, Washington’s neoconservative lobby has sought to downplay the less appealing aspects of the government that came to power in Kiev in February. … But examples of the new authoritarianism gripping Kiev have become tougher to miss in recent months …

Carden goes on to highlight a case in point. In October, Poroshenko signed a decree establishing October 14 as an official “Day of Ukrainian Defenders” to commemorate the founding of the Ukrainian Insurrectionist Army, known as the UPA, during World War II. Carden then notes:

As the historian Halik Kochanski has noted, the UPA worked hand in hand with Poland’s Nazi occupiers, killing, to take but one example, nearly 10,000 Poles over the night of July 11-12, 1943. “A feature of the UPA action,” according to Kochanski, “was its sheer barbarity. They were not content merely to shoot their victims but often tortured them first or desecrated their bodies afterwards.” … Don’t let anyone tell you Russia has a monopoly on “disinformation.”

Thus, in its zeal to legitimize Poroshenko’s anti-Russian government in Kiev, the mainstream American media managed to ignore his commemoration of former Ukrainian atrocities.

Under the Nuclear Cloud

Would that fascist elements were the only concern, but there is an even bigger danger: the threat of total annihilation.

Unmentioned in most coverage of the Ukraine crisis is the fact that Russia and the United States are armed with enough nuclear missiles to destroy civilization along with most, if not all, of humanity.

“The Cold War is already on. What’s next? Unfortunately, I cannot say firmly that the cold war will not lead to the hot one. I’m afraid that they might take the risk.”

Gorbachev called for the West to lift economic sanctions against Russia. But he also warned Putin against moving militarily to support pro-Russian separatists in Ukraine: “If our country intervenes, a huge fire may spark, and the whole world won’t be able to put it out.”

Again, the American mainstream media barely covered this critical statement by the former president of the USSR.  A Google search found coverage at the Times, but only online, not in the print edition. Similar searches found nothing from the Wall Street Journal and several other major news outlets. So most American readers know nothing about this balanced analysis by the now widely-respected former Russian leader who presided over the end of the Soviet era.

The Risks of Ignorance

Allowing the Ukrainian conflict to fester as a result of one-sided reporting creates incalculable risks. These go far beyond the thousands of dead and the hundreds of thousands made refugees by this bitter confrontation.

Given Russia’s centuries-old concern about Western encroachment on its borders, the eastward expansion of NATO since 1999 is seen in Moscow as a series of unconscionable provocations. To understand that perspective, imagine how Americans would feel if a weakened United States were being surrounded by a Russian-backed, anti-American alliance along the Mexican border.

President Reagan was so disturbed by the left-leaning Sandinista government in Nicaragua that he became embroiled in the notorious Iran-Contra scandal that almost ended his presidency. And that was when the U.S. was militarily and economically much stronger than Russia is today. Indeed, the “liberal delusions” that drove this heedless baiting of the Russian bear were spelled out last year in an article in the authoritative journal Foreign Affairs, entitled “Why the Ukraine Crisis Is the West’s Fault.”

Instead of goading and demonizing Putin, this is the time for the West to build bridges to Russia based on mutual respect. Nuclear deterrence is sometimes called “Mutually Assured Destruction.” Isn’t it time to explore Mutually Assured Survival?