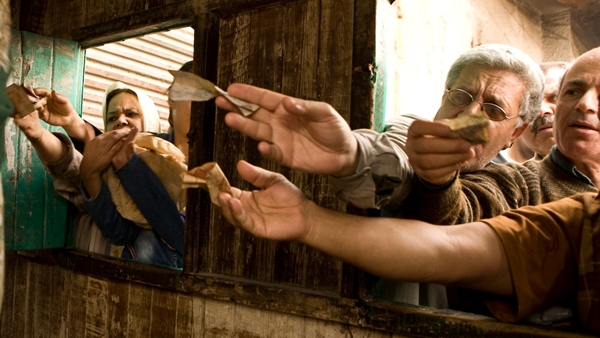 Let Them Eat Baklava: Food Prices and the Arab Spring What do food prices have to do with a quest for change?

Did food prices cause the Arab Spring? Will food and water be at the core of future protests against fundamental inequities in the world?

This study, released this month by the New England Complex Systems Institute, certainly suggests so. Examining data from 1990 to the present, researchers Marco Lagi, Karla Bertrand, and Yaneer Bar-Yam have found a striking correlation between global food prices and numerous uprisings in North Africa and the Middle East. This year’s revolutions in Egypt and Libya are the most recent examples of such conflicts, the researchers warn, but they certainly won’t be the last.

Their essential theory is fundamentally simple, and can be summarized as follows:

Humans count on governments to maintain a baseline level of security for themselves and their families. Adequate, accessible food supply is one component of security, and likewise, an effective food infrastructure is generally regarded as a government responsibility. Poor countries, which historically relied upon subsistence agriculture, are, as a result of globalization, increasingly dependent on world-girdling supply chains. As long as food is coming in through international trade, and is affordable, many populations will tolerate even the most despotic of dictators. However, when prices get too high, often as a consequence of the global marketplace, an oppressed population can quickly move toward insurgency.

The explanation here is somewhat straightforward:

if you and your family are facing imminent starvation, risking your life to try to overthrow an entrenched government becomes a far more realistic option, because you have nothing to lose. When enough people are hungry enough for this logic to become widespread, you have yourself a revolution.

While logical in its own right, this theory has been bolstered by dramatic evidence in the past few years, as Lagi et al demonstrate. In 2008, more than 60 food riots took place in 30 different countries, primarily in Africa and the Middle East. As the researchers explain, a concomitant spike in global food prices accompanied—and probably precipitated—this spike in worldwide violence. Accordingly, the relative decrease in global food prices in 2009-10 accompanied a comparable lull in food-related protests. However, by late 2010, prices were once again on the rise, and lo and behold, 2011 has experienced a comparable spike in food riots, and, in North Africa and the Middle East, a series of full-on revolutions—the so-called “Arab Spring.”

As the researchers’ data displays, the probability that the Arab Spring had nothing to do with the simultaneous spike in food prices is highly improbable (p < 0.06, considering the 1990-2011 period). Indeed, the ‘nothing to lose’ logic helps explain the motivation to finally uproot such longstanding autocrats as Hosni Mubarak and Muammar Qaddafi.

The report, while primarily descriptive, also has a prescriptive component for the future.

In the absence of large-scale intervention, food prices will again reach the so-called “threshold of instability,” above which widespread violence is likely, by summer 2012, or latest, spring 2013, if inflation estimates are taken into account. Likewise, the study’s researchers advocate widespread government action, such as halting subsidies for ethanol production (which consumes large quantities of corn), and more careful regulation of commodities markets.

And what if food prices, next time they ‘bubble,’ don’t come down anytime soon? If we are to trust commodities expert and philanthropist Jeremy Grantham, they very well may not. According to Grantham, who was featured for his ecological-minded efforts in the New York Times this month, future price hikes of such products as corn and soybeans may reflect a larger paradigm shift that’s taking place.

“From now on, price pressure and shortages of resources will be a permanent feature of our lives,” he contends. “The world is using up its natural resources at an alarming rate, and this has caused a permanent shift in their value. We all need to adjust our behavior to this new environment. It would help if we did it quickly.”

A paradigm shift in food prices could also, we might extrapolate, mean a broader increase in violence in the developing world in the near future. Lagi et al submitted an earlier report to the US government, back in December 2010, warning of impending violence due to food prices in the crisis-battered global economy—and four days later, the first of the past year’s long series of food riots began in Tunisia.

It’s not surprising, therefore, that the researchers declare it completely possible to identify the conditions for violence before violence occurs. The problem, however, is getting policy makers to listen to the experts on the need for preemptive action. As the researchers explain,

Our predictions are conditional on the circumstances, and thus allow for policy interventions to change them. Whether policy makers will act depends on the various pressures that are applied to them, including both the public and special interests.

We have been warned.