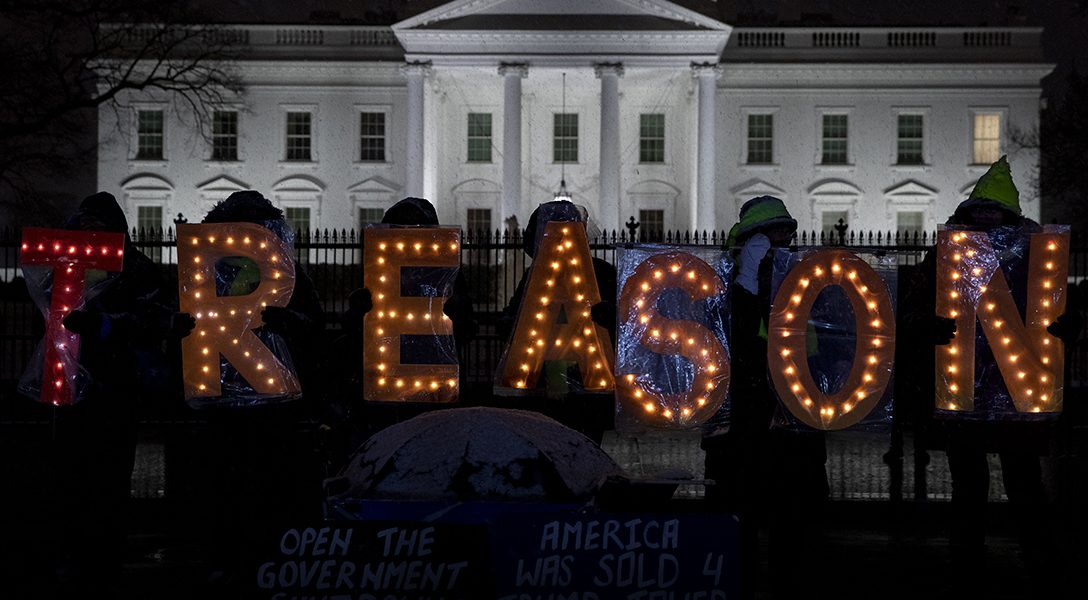 President Donald Trump has a new favorite word: TREASON! Everybody from Nancy Pelosi and Adam Schiff to the New York Times and Google should be charged with TREASON! And he knows the penalty for treason.

He has even developed a schtick at campaign rallies for his adoring base in which he raises an imaginary rifle and pulls the trigger, declaring: “It’s ‘bing’ and it goes quickly, right? It’s called, it’s called — you’re dead. Treason, it’s treason.”

This year Trump graduated from promising to lock ‘em up to vowing to string ‘em up. Who? “Traitors,” or more precisely — as men named Robespierre, Stalin, Hitler, Mussolini, and Mao all called them — enemies of the people, or more currently, enemies of the person, that person being Trump himself.

This is either an ominous development, if we are to assume that what the most powerful person on the planet says he intends to do is what he actually intends to do — or an equally ominous development, if the entire human population has by now been conditioned to ignore Trump’s actual words and view most everything he says as just Donald being Donald.

Trump’s 2016 campaign rallies were highlighted by his cheerleading “lock her up” chants about his enemy Hillary Clinton. Recently, however, he’s raised the ante with an onslaught of “treason” charges, a crime that calls for the death penalty. This could be a sign that the pressure is getting to him. Or it might just be a recently enticing favorite word.

These “treason” tweets are something new even for him. I donned my biohazard suit, covered my keyboarding hands in a double layer of protective vinyl gloves, and journeyed through the entire online database of Trump tweets searching for the word “treason.” I was shocked to learn that his only use of the word in a tweet before this year was on September 5, 2018, after an anonymous staffer wrote an op-ed for the “failing New York Times” about White House staff dissension. Trump tweeted a simple all-caps “TREASON,” ameliorated by a question mark.

For 2019, however, he’s tweeted his new treason brush against a squadron of personal enemies:

Treason is a massive charge to be slinging around. Treason and its cousin espionage are the only federal capital crimes — out of 41 in all — not involving some permutation of murder. It is the only crime defined by the Constitution itself, and for good reason.

Treason against the United States, shall consist only in levying war against them, or in adhering to their enemies, giving them aid and comfort. No person shall be convicted of treason unless on the testimony of two witnesses to the same overt act, or on confession in open court. — US Constitution, Article III, Section 3

The penalty for treason is death or imprisonment and fine.

Whoever … is guilty of treason shall suffer death, or shall be imprisoned not less than five years and fined under this title but not less than $10,000. — 18 US Code § 2381

The Founders chose to strictly define treason because of Britain’s history of charging political opponents as treasonous and imposing common law penalties, from the dispossession of property to drawing, hanging, beheading, and quartering, out of personal pique by the monarch. As James Madison explained in Federalist No. 43:

But as new-fangled and artificial treasons have been the great engines by which violent factions, the natural offspring of free government, have usually wreaked their alternate malignity on each other, the convention have, with great judgment, opposed a barrier to this peculiar danger, by inserting a constitutional definition of the crime, fixing the proof necessary for conviction of it, and restraining the Congress, even in punishing it, from extending the consequences of guilt beyond the person of its author.

Madison seems to have foreseen Trump in his crystal ball. Branding the launch of an impeachment investigation authorized by the Constitution as treason is the paradigm of a “new-fangled and artificial treason.”

Until this year’s treason-a-thon by Trump, the charge was used parsimoniously in this country. Trump wistfully mused to State department employees at the United Nations Mission recently that “The spies and treason, we used to handle it a little differently than we do now,” according to audio obtained by the Los Angeles Times.

He accompanied that by a rifle-to-the-shoulder gesture to make his meaning clear.

Well, not quite bing. Despite Trump’s view of history, only one American has actually been executed by the federal government for treason. (Several persons, including John Brown of the song “John Brown’s Body” were executed under state treason laws.) William Bruce Mumford was convicted of treason and hanged in 1862 for tearing down a United States flag in New Orleans during the Civil War. No other American has been executed for treason. Even Julius and Ethel Rosenberg, charged with delivering atomic bomb secrets to the Soviets, were executed for espionage, not treason.

In fact, despite Trump’s vow to charge dozens of people, from the chair of the House Intelligence Committee to “the failing New York Times” with treason, or more commonly TREASON!, not a single American has actually been indicted for treason since World War II.

“Adam Schiff’s connection to the Whistleblower is coming to light.” @FoxNews These facts, and others, make it impossible for the ridiculous impeachment “scam” to go forward! Schiff has also committed a crime, perhaps treason, in making up a horrible statement and reading….

Frightening as this sort of verbal bomb-throwing should be, especially from the one person on the planet who has the actual power to throw more and bigger bombs than anybody else, dropping this T-bomb word is just one more symptom of Trump’s increasing instability and loss of self-control. It would be giving him far too much credit to assume he is aware of the true meaning and history of the charge of treason in the United States. The reality is that it is simply a newly discovered favorite word of his.

On the other hand, the history of treason allegations could be of particular interest to a possible Trump successor. If Elizabeth Warren is as detailed a student of history as she is of what seems to be almost every other topic of human knowledge, it might inspire her to revive a name for the first naval ship to be commissioned under her presidency: The marines who arrested William Bruce Mumford, the only American actually executed for treason, had just come ashore from a then-famous warship, the USS Pocahontas.

Harvey A. Schwartz is a retired Boston civil rights attorney. He has argued two civil rights cases before the United States Supreme Court. His novel Never Again was published in November. It describes a frightening scenario in which something similar to the Holocaust happens in the near future in the United States.