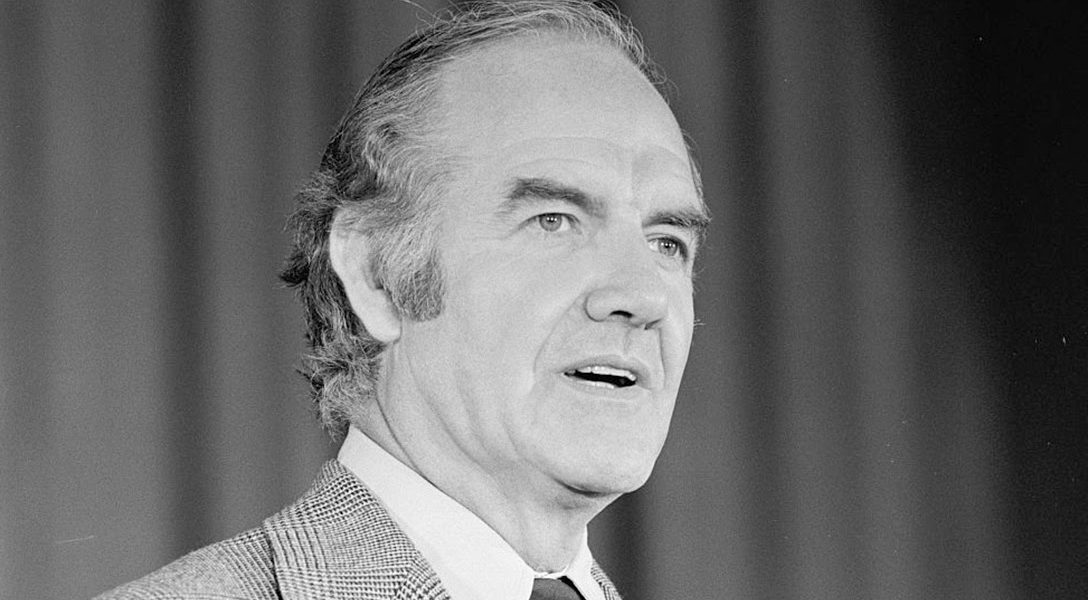 This is one in an occasional series of viewpoint pieces on the candidates. At WhoWhatWhy, we’re especially interested in hearing from those who have had documentable personal experiences with candidates that may provide insight into their priorities, manner, and character.

George McGovern broke my young bleeding liberal heart in 1972. Bernie, oh Bernie, do not disillusion us now the way George did then.

There I was in 1972, the ink barely dry on my journalism school diploma. Working as a baby reporter at the Utica, NY, Observer-Dispatch. My generation didn’t have a letter of the alphabet, no Gen X or Y or Z, not even A, B, or C. But we were so sure we were special. And empowered. We’d shut down the nation’s universities in a general strike. We’d created and enlisted in the anti–Vietnam War movement. Those of us who didn’t get drafted. Or killed.

In 1972 the archetype of evil, Richard Nixon, was running for reelection as president. We felt as warmly toward Nixon then as we adore Trump now. Trump is nothing new for us, just something more.

My introduction to presidential politics had been in 1968, when Nixon came to Syracuse as part of the launch of his presidential campaign. I encamped at a table outside the hall where he was to speak, playing Simon & Garfunkel’s Sounds of Silence nonstop for 12 hours. At full volume. That song haunts me yet. In my innocence I was sure I went a long way toward mobilizing opposition to Nixon’s perfidy.

Then in May 1970, just days after the revelation that the war had secretly expanded from Vietnam to Cambodia, days after the fatal shooting of four student protesters at Kent State University by National Guard troops, I joined 100,000 students marching on Washington. Because we were so confident our protests would change the world. I was energized. And then mystified by the most surreal encounter of my life.

I was camped on the steps of the Lincoln Memorial with other Syracuse University students, singing protest songs, altering our consciousnesses through the night when, shortly before dawn, up the steps walked a wedge of men with short hair, dark suits, and ties. And from their midst stepped the man himself. President Richard Nixon. He asked where we were from. Somebody said Syracuse. Somebody else tried to talk about the war. Nixon replied with knowledge and conviction. About Syracuse University’s football team. Then he disappeared.

My longing for a political savior lingered on. Two years later, in 1972, we were still energized. Still empowered. Still ready to change the world. Nixon was running for reelection.

The Democrats offered nobody for my generation. Sen. Ted Kennedy (D-MA), the surviving brother of President John F. Kennedy and Sen. Bobby Kennedy (D-NY), announced he would not, could not run. Not so soon after his Chappaquiddick disaster.

Sen. Ed Muskie’s (D-ME) primary campaign was tripped by Nixon’s dirty tricks when he was forced into what some saw as tears, others as snowflakes in his eyes. He was replaced as frontrunner by Hubert Humphrey, who’d already lost to Nixon in 1968 and believed my generation was invisible. The Joe Biden of 1972. We true believers had no champion.

Then from rural South Dakota, 50-year-old Sen. George McGovern rode in and captured our hearts and hopes. And the Democratic nomination. Fifty sounds like a spring chicken to us now, but remember: 1972 was back in the days of “don’t trust anyone over 30.”

Nixon branded McGovern’s campaign as based on “amnesty, abortion, and acid.” That sounded pretty damned good to us.

McGovern was our Bernie.

McGovern promised to end the Vietnam War. To grant amnesty to draft evaders. Cut defense spending by 37 percent. He proposed an Andrew Yang-like “demogrant” program to give $1,000 to every citizen. (McGovern offered $1,000 per year. Yang proposes $1,000 per month. Is there a more stark example of inflation?)

We didn’t “feel the Bern” but we jumped on the McGovern train. Thousands of young people knocked on doors, traveled the country enrolling young voters. A clever young guy named Bill Clinton dragged his girlfriend, Hillary, to run McGovern’s Texas operation. Simon & Garfunkel reunited to support him, together with Peter, Paul and Mary.

It was a joyous children’s crusade. We fought against Nixon, the personification of everything wrong with America. We were the future, empowered by years of street marches. We’d fought the system and we thought we’d won.

My grandson Noah feels the same about Bernie. I want to also.

Of course, McGovern let us down. Nixon carried 49 states in the election, losing only in Massachusetts and the District of Columbia. We’d been blinded by our dreams. The political nirvana we hoped possible was a bridge too far, but we didn’t know that then. We were ready for what McGovern promised. The rest of America was not.

We wandered down this road of hope with McGovern and found it ended in despair. And Watergate. Right up to election day our eyes were blinded by hope-dust. The fear is that it could be happening again with Bernie.

Back then, though, for me, McGovern let me down well before the election. The Utica Observer-Dispatch managing editor thought it would be a clever idea to have a 24-year-old rookie reporter cover McGovern’s campaign during a New York swing.

I sweated out the Secret Service security review — just three years earlier I’d had to hide in a cabin in the Adirondacks after a tragic misunderstanding involving an explosion that demolished the Syracuse ROTC quonset hut — but I squeaked through with what was probably a “he-can-be-close-to-Democrats-only” clearance. There I was, notebook in hand, on Day One of McGovern’s New York tour, sharing the back seat of the campaign limo with the man himself.

Just before our first stop, McGovern turned to me and casually asked what was the hot issue in Rome, NY, where he was about to speak. The Air Force base, I told him. They don’t want to lose Griffiss Air Force Base, a big employer. Thanks, the Liberal Hope said, as he got out of the car.

Then McGovern walked to the microphone before an adulatory crowd. “I promise never to close Griffiss,” he yelled at the crowd. They cheered.

Bernie, don’t do that to us. How many times can a political heart be broken?

Harvey A. Schwartz is a retired Boston civil rights attorney. He has argued two civil rights cases before the United States Supreme Court. His novel Never Again describes a frightening scenario in which something similar to the Nazi Holocaust happens in the near future in the US.