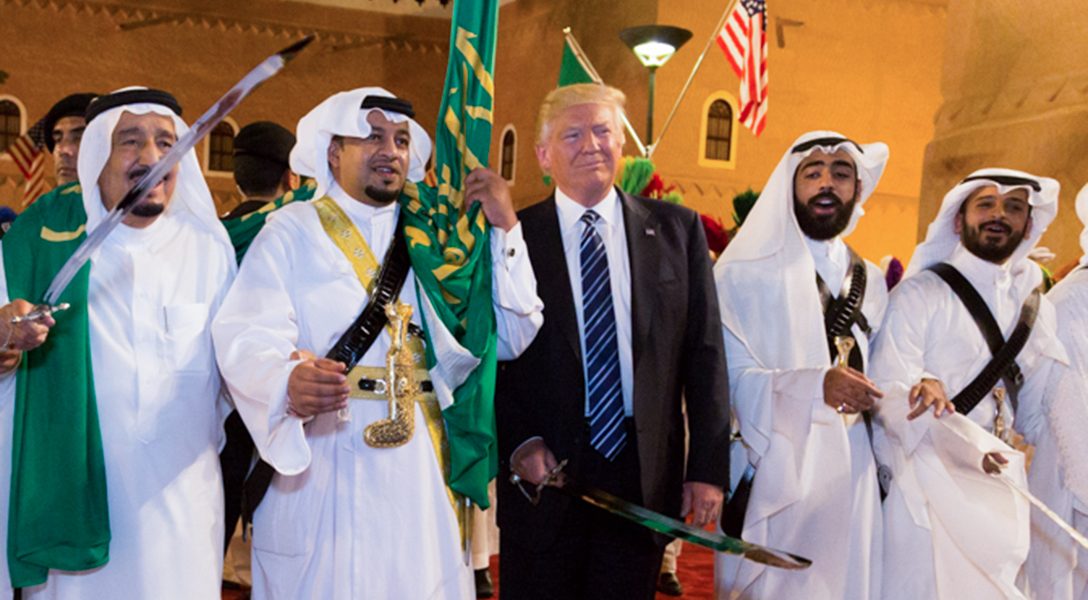 A new report from the nonpartisan Congressional Research Service shows that the Trump administration has begun to adopt increasingly lax standards on the sale of arms to countries with dubious commitments to human rights. Regardless of track records on intensifying humanitarian crises, the administration has prioritized increasing the sale of weapons to the region — notably Saudi Arabia and Bahrain.

Trump had touted his $110 billion deal with Saudi Arabia as an economic boon (a position defense contractor Lockheed Martin shares), tweeting in June, “Bringing hundreds of billions of dollars back to the U.S.A. from the Middle East – which will mean JOBS, JOBS, JOBS!”

Bringing hundreds of billions of dollars back to the U.S.A. from the Middle East – which will mean JOBS, JOBS, JOBS!

Whether the United States should engage in such deals has long been a topic of contention. Where advocates see consistent and heavy military armament as the most promising strategy to guarantee national security, critics underscore how sales drive militarization, intensify regional arms races, and enable human rights abuses.

The Saudi-led coalition in the ongoing war in Yemen has been widely criticized (by the United Nations, among others) for its human rights record. And the Saudi government itself has come under fire for dubious connections to terrorist organizations. Nevertheless, the US has supplied the vast majority of munitions employed by the coalition — a move designed by the Obama administration that Trump has amplified.

The 2017 arms transfer agreement solidifies this position, approved after several efforts to stop approval of pieces of the deal in Congress. It has been met with staunch disapproval by several members of Congress, among them Sen. Rand Paul (R-KY), Chuck Schumer (D-NY), and Al Franken (D-MN) — all of whom voted for a measure to stop a $500 million portion of the deal, citing concerns about civilian deaths, starvation and malnutrition in Yemen, and increasing the strength of terrorist organizations.

And the administration has been active elsewhere. Where the Obama administration delayed a $4 billion deal with Bahrain until the country could produce evidence that it was taking steps to improve its human rights record, the Trump administration announced it would move forward in March 2017. Reports from UN investigators reveal that not only has the country failed to take steps to protect human rights, but conditions have in fact deteriorated.

But for some officials, these developments don’t go far enough. “While we have historically enjoyed a strong relationship with our Bahraini counterparts,” General Joseph L. Votel said in a statement, “the slow progress on key foreign military sale cases, due to concerns of potential human rights abuses in the country, continues to strain our relationship.” His vision of progress, it seems, is likely to take a stronger hold.