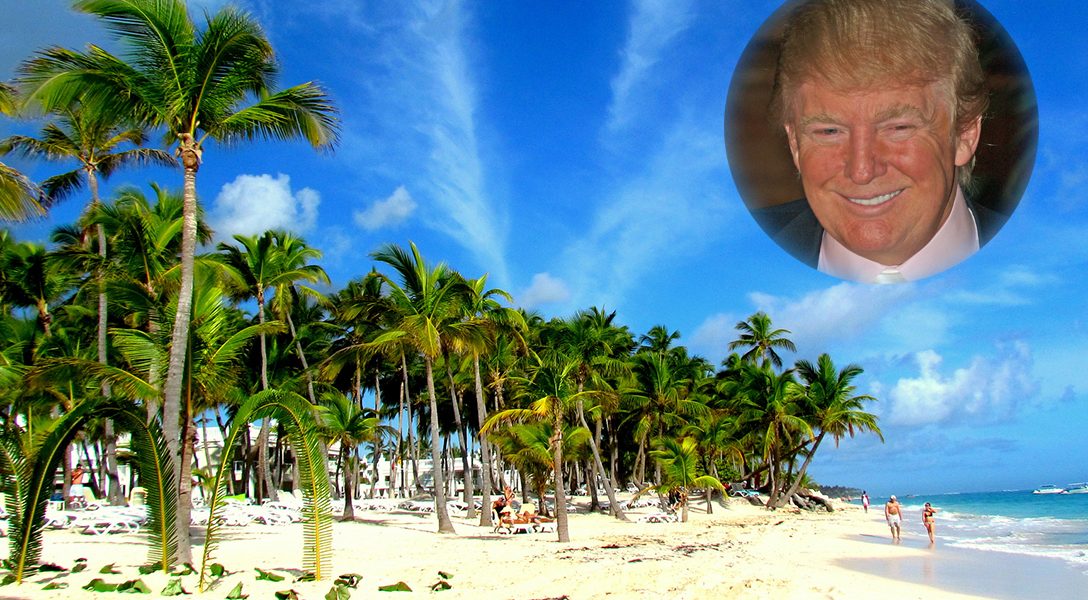 With all of the craziness the Trump administration is throwing at us, there is always a chance that a major story is going to slip through the cracks. Like this one: Remember when Donald Trump stood next to piles of (likely empty) folders and pretended that he would take any number of steps to separate himself from his business interests? His attorney even promised that to prevent further conflicts, the Trump Organization wouldn’t do any new international deals.

Well, it now appears that the concept of existing deals can be stretched to an extreme, and include revival of just about any old, dead deal, regardless of prior form.

Such A Deal I Have For You! The AP reports on the negotiations to revive one such deal that the Trump Organization is involved in: licensing its name to a project that aims to sell 68 ultra luxury lots and other properties at Punta Cana in the Dominican Republic.

The Lebanese-Dominican Hazoury family’s company, Cap Cana S.A., financed a fair portion of the project, in the form of bonds. They reportedly accepted auction bids for most of the lots, but the project tanked when the global investment market crashed in 2007-2008, leaving unhappy bondholders — after multiple defaults — and empty lot owners. Many blame the Hazourys for misappropriation of funds and mismanagement of the project.

The Trumps later sued the business and its principal backers and reportedly received a substantial portion of the initial license fees in settlement in 2013. The Trumps exited, taking back the rights to their name on the project at the time of settlement.

The project remains in disarray, with many lots now reverting to jungle, but time seems to heal all wounds for the Hazourys and their project. Charges of illegality and corruption lodged against the developers with Dominican officials are pending (Spanish language source here), but the legal system in the Dominican Republic is no model for effective justice.

Meanwhile, the Hazourys have reportedly negotiated a settlement with the bondholders, and the market for new development has reportedly improved at Punta Cana, as it has elsewhere.

As Trump’s fame spread during the campaign, and after the election, his involvement is once again worthwhile to the promoters, who are now said to be in discussions to reopen the old, dead deal.

All of a sudden the formerly untrustworthy Hamourys — Trump filings refer to the project as “textbook fraud” — say they have an “incredibly strong” relationship with the Trump Organization. So it looks like found money all around. The Trump Organization general counsel now says “we feel that we owe an obligation to the buyers to do what we can.”

No mention of President Trump’s pledge to forego any new deals, because, well, if you’ve done one deal, hey, there’s really nothing new under the sun.

This story could make for a great comedy, starring maybe Owen Wilson as Eric Trump, and Vince Vaughn as one of the Hazoury brothers. Kellyanne Conway could make a cameo appearance to pitch lots at Punta Cana, urging you to help the misfortunate lot buyers there.

In the case of Trump, his business entanglements and “alternative facts,” the truth really is stranger than fiction.