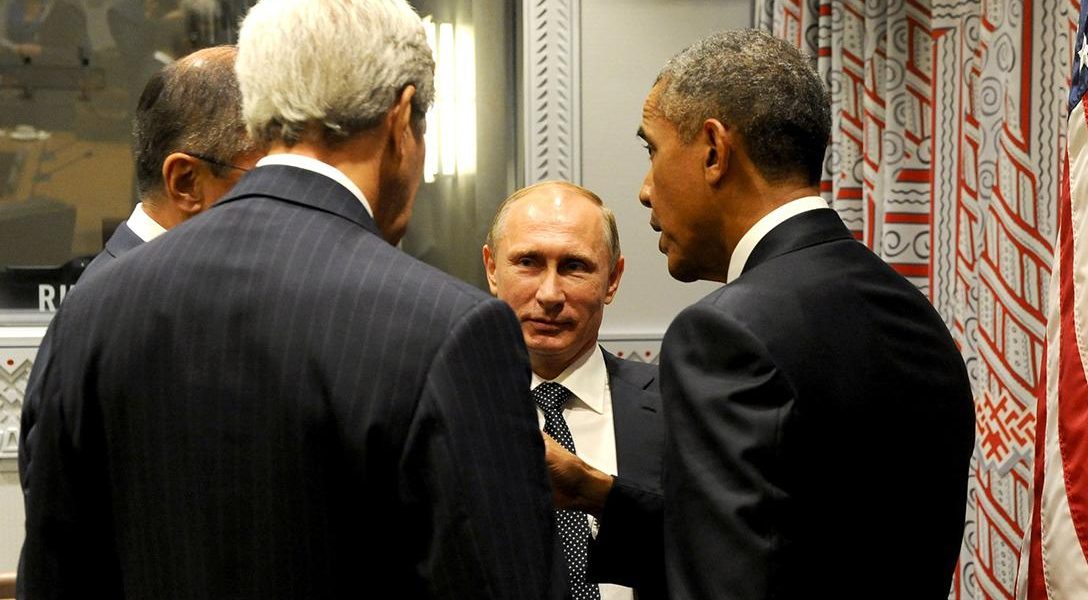 As the Syrian army advances on shattered East Aleppo and US Secretary of State John Kerry struggles to find his footing against the Russians, Western media is ripe with speculation that the offensive is timed to the US election.

As The New York Times put it, “The strategy of President Vladimir V. Putin of Russia, [experts] say, is to move aggressively in what he sees as a prime window of opportunity — the four months between now and the 2017 presidential inauguration — when Mr. Putin calculates that the departing President Obama will be unlikely to intervene in the escalating Syrian conflict and a new American president who might consider a tougher policy will not yet be in office.”

Conventional wisdom has it that the Obama administration will find it hard to take big risks against the Russians, undermining its own recent diplomacy, in the final weeks before a crucial election. Consequently, the Russians and the Syrians have a rare opportunity to act and talk tough — all the way to threatening to shoot down US aircraft if they try to bomb the advancing Syrian forces.

There is some truth to that framing, experts interviewed by WhoWhatWhy said, but the situation is in fact far more complicated. On the one hand, the Kremlin never trusted the US overture for a brief ceasefire that collapsed last month.

“In the Russian political community there is a sense that we cannot trust the Americans, that this is the last shot of the lame duck Obama just to persuade the public that there has been at least some success in the foreign policy against the backdrop of terrible debacles in Afghanistan, Iraq, Libya, Syria and so on,” Victor Mizin, a senior Russian analyst and the vice president of the Center for Strategic Assessments in Moscow, said shortly before the truce fell apart.

“One of the factors is that US diplomacy is jealous of Russian successes, both militarily and as an intermediary in the process of Syrian settlement, but generally, my take would be that Syria is already a black hole, and frankly, I would love to see any benign developments, but so far even with the successes of Assad and the government forces we cannot see that there is the dawn of a new Syria,” Mizin added. “It’s still a country of turmoil, it’s still the black hole of instability in the Middle East.”

Joshua Landis, a prominent Syria expert in the US (a professor at the University of Oklahoma and the administrator of the Syria Comment blog), echoed Mizin’s caution, but said the West may be slowly coming to terms with a possible Assad victory, at least in the major Syrian urban centers. Here is a transcript of his comments:

Do you think the recent escalation in Aleppo is linked to the US election? “You know, perhaps a little bit. I don’t think that’s the main story here. It sells well in the US because we are in the middle of this election cycle and Americans think that everything is related to their electing a president. I think Assad has been meaning to go after Aleppo for the last half a year and he was delayed by the last truce, and the previous truce before it, and then they [the rebels] broke through, there was a resupply of the rebels and Nusra [former al-Qaeda associate in Syria] led the charge to break through the [regime] encirclement [of Aleppo]. That set them [the regime] back by a month and a half. Then Kerry got into negotiations over the Pentagon possibly bombing Nusra, and that delayed it by another several weeks. The Assad regime has been looking at all these delays as an annoyance and a costly expense on their part, because they believe that the rebels are getting armed. So, this onslaught, I am sure there is a sense of urgency, because who knows what Clinton would bring, but on the other hand the Russians and the Syrians have been itching to take Aleppo and to assert Syrian dominance over all the main urban areas.”

Does this fit the framework of the Syrian regime preparing for eventual negotiations? “No, look, there are negotiations going on all the time. On the other hand, the kind of negotiations that I think most Westerners think about — no. This is not about power sharing. This is about militias giving up or being destroyed.”

So Assad is going for an all-out win? “Assad believes that he can reconquer all of the country, that it should be one country, that all these groups are insurgents who are being funded by outside powers, and they are terrorists, legally and, in his mind, morally. And he wants to kill them.”

What about the negotiations you mentioned, which are going on all the time? “Well, it’s a little bit like Israel, in 1948 or 1967, you know, you want as big a victory as you can but you always have to negotiate in the end. Even if it’s with a defeated people. Because you are going to decide on what conditions can the remaining rebels live under your control, do the rebels that you’ve surrounded and are trying to give up, do you let them go out, do you let them go out with their guns, do you let them stay or do you make them go to Turkey or can they go to Idlib, Raqqa or some other place. These are all negotiable things, and the UN has to be involved, because it’s going to oversee this process, and of course you have to deal with the Turks, you have to deal with the Kurds… These are all negotiated situations, because the Americans back the Kurds, the Turks back other rebels, so you are not just dealing with defenseless people, you are dealing with great powers who can constantly throw a spanner in the works. So there are negotiations of one kind or another going on at all times.”

What else has changed in Syria in the past month? “I think that increasingly, the West is coming to the conclusion that there may not be a negotiated solution, a power-sharing solution. That Assad is stronger than they thought he was. That maybe he can actually reassert some kind of government rule over a larger area of Syria than they had presumed. And also, what’s changed, with the Turkish intervention, is that there are more actors in the field now and the situation is a little more complicated and in the interests of the Turks — for America, there are no good choices for defeating ISIS. You have three [possible] partners — you have the Turks, with their Arab proxies, you have the Kurds, and you have Assad with the Syrian army…. None of these are optimal. There isn’t a Syrian liberation movement that America wants to get behind — that would be pro-US. This is the problem. The US cannot come out of this a winner… The US is left in an awkward position of in a sense holding Assad’s coat at [ISIS’s Syrian capital] Raqqa and waiting for him to come and put it on.”