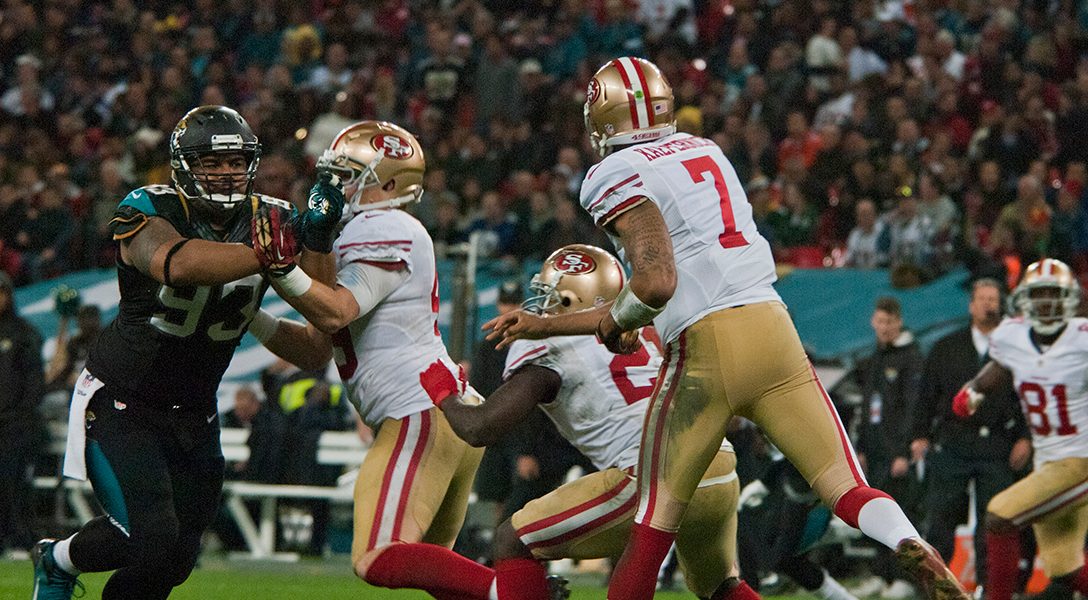 If flag-draped super patriots thought they could effectively shame NFL players into conformity in the wake of recent national anthem protests, they were sorely mistaken.

When the NFL regular season goes into high gear with a full slate of games Sunday afternoon, this uncomfortable issue will be front and center, with players from across the league standing – or kneeling – in solidarity with San Francisco 49ers’ quarterback Colin Kaepernick and his cause. One entire NFL team, along with their head coach, plans some kind of unconventional gesture during the Star Spangled Banner  rendition Sunday, and rumors are mounting that their opponent across the field may do something similar.

The season actually kicked off with one game on Thursday night, and sure enough, Denver Broncos’ linebacker Brandon Marshall took a knee during the anthem. The vitriol against Marshall began almost immediately. Within hours, the fifth year player, who helped the Broncos win the Super Bowl last January, was facing threats on social media and saw an endorsement deal get spiked.

Kaepernick refused to stand for the pre-game anthem during an NFL exhibition game last week , citing outrage over increasingly visible violence against blacks at the hands of police across the country. The six-year veteran, with a Super Bowl start on his resume, told NFL Media “I am not going to stand up to show pride in a flag for a country that oppresses black people and people of color. To me, this is bigger than football and it would be selfish on my part to look the other way. There are bodies in the street and people getting paid leave and getting away with murder.”

All 53 players on the Seattle Seahawks plan some kind of unified message during the anthem before their afternoon kickoff. The Seahawks’ high-profile head coach Pete Carroll, a passionate skeptic of the official 9/11 story and an anti-war advocate, said his players have his support. Further, the Seahawks’ opponent on Sunday, the Miami Dolphins, called a players-only meeting  late this week to discuss some kind of statement of their own when the anthem begins. Their first-year coach, Adam Gase, admitted he didn’t know what his players have planned.

There is a good chance, then, that two entire squads on the same corporate-NFL field will be acknowledging frayed race relations on the nation’s biggest stage. It is a safe bet that there will be sporadic protests by players in most of the other 14 games set for this week.

Needless to say, the prospect of mass protest during our nation’s romanticized official song – written by a slave-owning anti-abolitionist, by the way  – should have the tone-deaf segment of conservative America in a white hot rage. Their reaction to Kaepernick’s original protest, as expected, completely missed the point and further cemented the stereotype.

I’m sorry but @Kaepernick7 needs to learn the fact about police before running his dumbass mouth! He has no clue what they go thru! #idiot

The widening protest leaves them in quite a predicament, however. They’re suddenly stuck between their rabid love for America’s favorite team support (played predominantly by blacks), and their obligatory outrage whenever minorities choose to stand up for themselves when the most people are watching. What to do, what to do?

While the NFL and the 49ers organization have put out statements respecting Kaepernick’s right to protest, that won’t matter to the frothing masses. To them, the documented history of US atrocity is a myth, the troops and police are infallible and your public allegiance during the Star Spangled Banner is compulsory. Never mind that they most likely stay firmly planted on their couch at home when the first bar of the anthem begins.