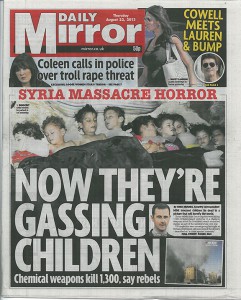 The Obama administration and allies claim, with near certainty, that Bashar al-Assad has used lethal gas on his population.  But no credible evidence has emerged to confirm this. Conversely, as the West pushes for approval to bomb the Assad regime, some evidence suggests it may instead be the rebels who are using chemical weapons against other rebels—an extension of ongoing ethnic/religious battles being fought with what one UN inspector characterized as “almost medieval savagery.”

Perhaps both regime and rebels are using chemical weapons. Whatever the reality, these uncertainties must be carefully studied, right now, as the world edges to the verge of war.

Here is WhoWhatWhy’s roundup on the topic.

A recent report says rebel fighters told a journalist inside Syria that in fact it was they who released sarin gas—and notes that some claimed the nerve agent was supplied by Saudi intelligence chief Bandar bin Sultan. Saudi Arabia, a longtime enemy of the Assad regime and a leading partner in US Middle East activities regarding not just Syria, but also Libya and Iran, has been active as a supporter of and sometimes surrogate for the West.

The report, which appeared on an independent Minnesota-based website, and was co-authored by Yahya Ababneh, a Jordanian freelance reporter operating on the ground near the gas attacks, and Dale Gavlak, a veteran Middle East stringer  for the Associated Press, whose work has also appeared on NPR and the BBC, cannot be easily dismissed.  It has circulated widely within alternative media circles but is unreported by more influential media in the United States.

Ababneh, who is pursuing a Masters degree in journalism, talked to numerous Free Syrian Army (FSA) fighters in the Ghouta area, where the August 21 gas attack occurred.  According to the Gavlak-Ababneh report, rebel FSA fighters took responsibility for releasing sarin, some claiming that the nerve agent was supplied by Bandar.

Another intriguing, if murkier development surfaced on August 24, when a video appeared on Facebook purportedly showing a gas attack via artillery shelling.

A specialized blue canister was carefully affixed to an artillery gun and fired over a wall.  The men in the video, who are not in uniform, do not appear to be Syrian military; they may or may not be rebel fighters.  This video is titled: “Chemical weapons in Syria: Knockout to Jirga Brotherhood criminals P.”  The sketchy description implies that attack was directed at other rebel factions in the nation’s splintered, multi-sided conflict.  The Facebook page on which the video appeared is identified as being run by something calling itself “Minister of blood pressure and diabetes,” according to the Google Translator.  It boasts 287K “Likes,” but should obviously be considered with caution.

Another, more credible instance in which rebels, not the Syrian government, allegedly used chemical weapons came on April 25. That attack was investigated by United Nations inspectors.  In an interview with Swiss-Italian television, the Italian Carla del Ponte, a well-known former chief war crimes prosecutor for tribunals on genocide in Rwanda and Yugoslavia, and a member of the UN Independent Commission of Inquiry on Syria, said:

During our investigation for Crimes Against Humanity and War Crimes, we collect some witness testimony that made to appear that some chemical weapons were used.  In particular nerving gas, and what appear to our investigation that that was used by the opponents, by the rebels.  And we have no, no indication at all that the government, Syria, authority of the Syria government had used chemical weapons.

Similar statements made by del Ponte were covered in the spring by the New York Times and Reuters, though they do not seem to be receiving attention during the current round of allegations against the Assad regime.  And the evidence pointing at the rebels not the government was played down by the UN commission itself, which, unsurprisingly, given intense pressure from powerful member nations, refused to come to a conclusion as to who was responsible for the April attacks. Without explaining the history of UN hesitancy to go against its most powerful constituents, the Times noted the backpedaling:

Russia’s Evidence From a March 19 Attack

Russia, an ally of Syria, has, not surprisingly, challenged the US-led coalition’s efforts to pin gas attacks on Assad. Notwithstanding its own interests, some of the material it has presented appears to deserve attention by the open-minded.

Vitaly I. Churkin, Russia’s UN ambassador, asserted in July that rebels had used sarin during still another attack, on March 19. Churkin submitted an 80-page technical analysis, and concluded:

“There is every reason to believe that it was armed opposition fighters who used the chemical weapons in Khan al-Assal.”

“Turkish police have reportedly detained several members of the Al Nusra Front, a Jihadist group that’s fighting among the Syrian rebels against the Assad government.  The men were apparently on their way to the Syrian border transporting a cylinder of Sarin nerve gas.”

Russian sources for the incident are vague: “Turkish media reports.” But no media are mentioned by name.  The rebel fighters reportedly possessed a “2 kilogram” cylinder of the deadly nerve agent.  Twelve of the jihadis were detained, according to that report. The UK’s BBC also covered this arrest story, but only to feature comment from a Turkish official downplaying the report; US media by and large did not cover the story at all.  The British story did acknowledge Turkey’s own central role in the efforts to topple Assad, with this disclaimer:

“The Turkish government has been a key supporter of the Syrian opposition, and has allowed rebels as well as refugees onto its territory.”

Last December, CNN reported that US contractors in Turkey and Jordan were training FSA rebels to handle chemical weapons.

“The United States and some European allies are using defense contractors to train Syrian rebels on how to secure chemical weapons stockpiles in Syria, a senior U.S. official and several senior diplomats told CNN Sunday.”

This was presented strictly as defensive, but the very notion of the rebels being familiarized with the weapons itself seems to be relevant to the current, largely one-sided reporting that only Assad’s forces have chemical weapons know-how.

News reports frequently state that only the Syrian regime could have access to such weapons. But in fact the countries backing the rebels certainly have it. And in fact weapons shipments have been arriving steadily from Libya, a nation whose chemical weapon stockpiles went missing after the 2011 NATO-assisted overthrow of the government.  As the New York Times reported in June:

“Many of the same people who chased the colonel [Qaddafi of Libya] to his grave are busy shuttling his former arms stockpiles to rebels in Syria. The flow is an important source of weapons for the uprising…”

And The Washington Post reported, back in February of 2011:

“…10 metric tons of mustard sulfate and sarin gas precursor remain stockpiled in barrels at three locations in the Libyan desert south of Tripoli, where Moammar Gaddafi has holed up in a last-ditch fight to keep from being overthrown.  Many experts worry that the barrels are ripe for picking by terrorists linked to al-Qaeda.”

The hacker collective Anonymous posted a series of videos purportedly showing Syrian jihadis testing sarin nerve gas on rabbits, as early as December of 2012.  The manufacturer of the chemical agent is identified as Turkish chemical firm “TEKKIM.”

Recent statements by US Secretary of State John Kerry seek to separate the use of nerve gas from the issue of who the guilty parties are.

“And as Ban Ki-moon said last week, the UN investigation will not determine who used these chemical weapons, only whether such weapons were used – a judgment that is already clear to the world.”

The statement, remarkable in itself, does not seem to have drawn media scrutiny. Kerry appeared eager to simply establish that nerve gas was used, while skipping over the importance (before intervening militarily) of establishing with certainty who was committing the atrocities. Heavily one-sided coverage of his statement by the media has already convinced large portions of the population that it is Assad who is using the chemicals. From there, it is a quick leap to accepting the administration’s declarations that it is urgent that it be permitted to begin bombing against Assad’s forces.

Another revealing piece from the Associated Press featured US intelligence officials themselves casting doubt on the perpetrators. This report, too, has somehow not gained full-throated media attention:

“So while Secretary of State John Kerry said Monday that it was “undeniable,” a chemical weapons attack had occurred, and that it was carried out by the Syrian military, U.S. intelligence officials are not so certain that the suspected chemical attack was carried out on Assad’s orders. Some have even talked about the possibility that rebels could have carried out the attack in a callous and calculated attempt to draw the West into the war. That suspicion was not included in the official intelligence report, according to the official who described the report.“

Parallels to the WMD Rationale for Invading Iraq?

The accusation against Bashar al Assad recalls similar charges against Saddam Hussein one decade ago.  The difference is that this time there is no doubt that Weapons of Mass Destruction (sarin nerve gas) have been used. The question remains, by whom?

Recently, Assad invited inspectors in, saying this would establish that it was not his troops using chemical weapons. But as soon as the inspectors arrived, they came under gunfire and withdrew. As with the chemicals themselves, it is not clear who wanted the inspectors to leave.

Do We Want a Confrontation with Russia?

The current debate over who did what obscures a larger issue: an attack on Syria could lead to something much more dangerous and protracted.

Russia has a large stake in the Syrian conflict, with Assad one of its few remaining military allies, as well as an active naval base inside Syria at Tartus on the Mediterranean.  Russia has sold to Syria advanced defensive weapons including S-300 surface to air missiles.  Russia’s president Putin derided the latest chemical weapons claims against Assad as “utter nonsense,” and “nothing more than a provocation by those who want to drag other countries into the Syrian conflict, and who want to win the support of powerful members of the international arena, especially the United States.”  Foreign Ministry Spokesman Alexander Lukashevich warned that,

“Any unilateral use of force without the authorisation of the UN security council, no matter how ‘limited’ it is, will be a clear violation of international law, will undermine prospects for a political and diplomatic resolution of the conflict in Syria and will lead to a new round of confrontation and new casualties.”