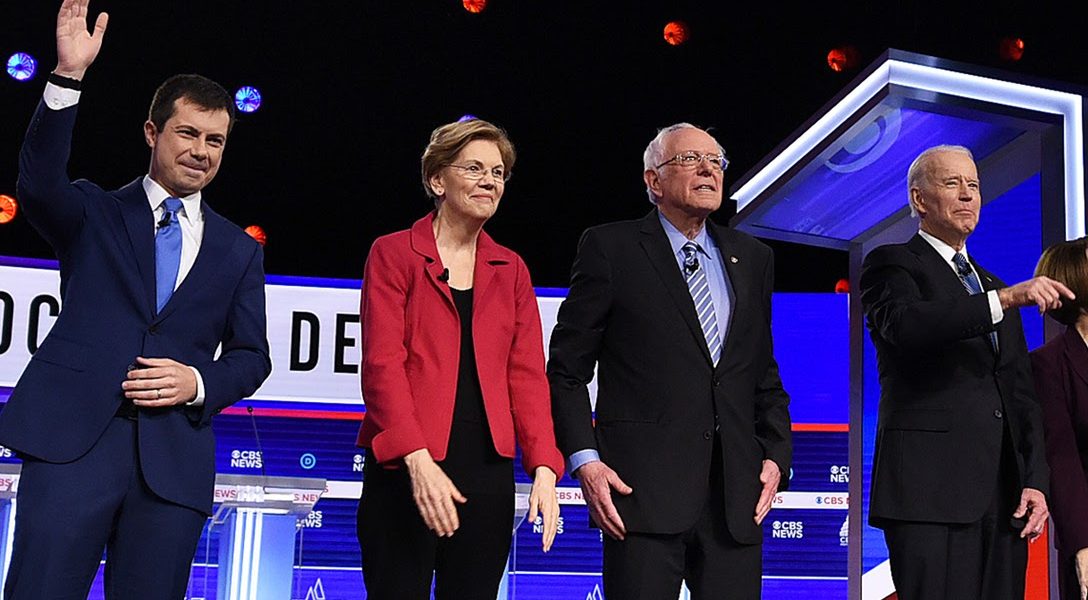 The day after Super Tuesday, March 3, we may or may not have a clear idea of who the Democratic presidential nominee is likely to be. But centrists are freaking out because they fear voters will make what centrists deem an apocalyptic choice: Bernie Sanders.

Their freakout is irrational and often self-interested. In the real world, nobody knows anything and the future is as malleable as it is unknowable.

After the Democratic debate on February 25, columnist Frank Bruni in the New York Times captured the panic, widely expressed elsewhere in similar terms:

In case you were at all confused, Bernie Sanders is the apocalypse. Or something very close to it. That was the message from his six rivals… And they scared the hell out of me. That’s only partly because I fear that they’re right about Sanders….

Fear. Panic. Scare tactics. These are all emotionally manipulative tools that, among other unhealthy things, distract people from reasoned argument and other realities.

One line of attack has been that nominating/electing Sanders would mean the end of America as we know it. Two things about that. One, it doesn’t actually mean anything, it’s just empty ooga-booga. Two: so what? Even if it’s a little bit true, America as we presently know it contains much that needs ending.

I’m sure you have your own list. The most recent item on mine is having a political hack and Trump loyalist at the head the US intelligence community (not mentioned by Democrats in the debate).

America as we knew it (pre-Trump) relied on red-baiting, among other things, to keep the centrist power brokers and corporate capitalists in control of the country. Joe Biden’s still using red-baiting to attack Sanders, falsely claiming Sanders embraced the Cuban dictatorship. Biden also falsely claimed that Barack Obama “has never embraced an authoritarian regime and does not now.” This is demonstrably untrue, as Obama continued the dishonorable but expedient American habit of sustaining dictators that were useful to us.

Early in his first term Obama turned a blind eye to the military coup that produced a vicious dictatorship in Honduras that Obama embraced for years. Contrary to Biden, Obama’s authoritarian embrace included “friendly” regimes in Egypt, Oman, UAE, and elsewhere. Most notoriously, Obama embraced Saudi Arabia, even greenlighting the Saudi-led aggressive war on Yemen, a war crime under the Nuremberg Principles.

Totalitarianism From Right or Left Is False Equivalency in US

There is no reasonable evidence that Sanders supports totalitarianism. He has offended conventional mindsets by supporting Cuban achievements in healthcare and education, or by cheering the election of Hugo Chavez. His opponents demagogue these comments dishonestly, but they are enough of an affront to rigid orthodoxy to get some traction with the uninformed.

Masha Gessen writes thoughtfully of this in the New Yorker. Gessen, who grew up in the Soviet Union, describes herself as a refugee from totalitarianism. The way Sanders recently talked about Cuba made her uncomfortable:

What Sanders could have said, and should have said, is that totalitarianism, that most horrible of inventions of the twentieth century, is one of the greatest crimes against humanity. But it should not discredit the ideas of common welfare and basic fairness that make up socialism. Totalitarianism can weaponize any ideology; socialism is no more essentially totalitarian than capitalism is essentially democratic. This would have been at once factually true and true to the politics that Sanders has espoused …

It’s as if Sanders didn’t realize that all of these good things that he cites — literacy, public medicine, access to culture and public transportation, and being lifted out of poverty — are good because they create the conditions for human dignity, which is precisely what totalitarianism destroys.

None of America’s long-standing foreign policy duplicity gets much attention in Democratic debates, not even from those who have actually tried to do something about Yemen, such as Sanders and Elizabeth Warren. It’s easy to blame the shoddy work of debate moderators, but nothing prevents any candidate from raising any important issue, unless it’s a hesitancy to challenge a decades-old, largely bipartisan failure.

Bernie Bros Are Brownshirts and Bernie Is Hitler — Really?

MSNBC talking head Chris Matthews likened the rise of Sanders to the Nazi invasion of France. Sanders is a Jew whose family was devastated by the Holocaust. Matthews later apologized for the reference. He did not apologize for the widely shared apocalyptic mindset that allows one to compare Sanders to Hitler in the first place. Another Times columnist, Thomas Friedman, put the same thought in slightly grayer terms:

If this election turns out to be just between a self-proclaimed socialist and an undiagnosed sociopath, we will be in a terrible, terrible place as a country. How do we prevent that?

Will we be in a worse place that we were in 2016 when we had to choose between the same “undiagnosed sociopath” and a centrist Democrat with no humane vision?

One of the grand ironies of the Sanders candidacy is that he is trying to lead a party of which he is only a sometimes member by promoting traditional Democratic values long abandoned by the party beyond limited lip service.

Democrats once wanted universal healthcare and almost achieved it under Truman. Now the party stalwarts fight it tooth and nail. In 2008, Obama disbanded his campaign organization and bent to the conventional wisdom of Nancy Pelosi to deliver the Rube Goldbergian half-measure we call Obamacare. Now Amy Klobuchar and Pete Buttigieg and others spend more time and energy insisting that Sanders’s plan won’t do, rather than working themselves toward the aspirational goal achieved by every other industrial nation in the world.

This amounts to fighting for the right of people to be sick and vulnerable because that’s “realistic.” Seems pretty obvious that if your goal is to underachieve then you will underachieve.

Healthcare is symbolic of centrist Democratic resistance to Sanders’s articulation of other values once thought to be what the Democratic Party stood for. Besides healthcare, these include early education, college for all, immigration justice, expanding social security, social equality, and taxing the rich.

In another example of modernized red-baiting, Mike Bloomberg argued that the Russians were interfering in the primaries to help Sanders win. Sneaky Pete Buttigieg ran a quick bait-and-switch on that idea, saying of the Russians:

They want chaos, and chaos is what is coming our way. I mean, look, if you think the last four years has been chaotic, divisive, toxic, exhausting, imagine spending the better part of 2020 with Bernie Sanders vs. Donald Trump. Think about what that will be like for this country.

Comparing four months of 2020 to four years of Donald Trump is fraudulent. Comparing a presidential election campaign to a president’s incumbency is fraudulent. And the inherent threat here — to refuse to support Sanders as the nominee — is a form of dishonesty called political blackmail.

This is more rhetorical fearmongering, but at least she focuses on the next four months, the campaign leading up to the nominating convention. She went on to attack Sanders with conventional complaints about his healthcare plan being too expensive and his being a “socialist,” which really has no explicit meaning.

Klobuchar’s using the “socialist” epithet smacks of desperation when used on Sanders, who has embraced democratic socialism for his entire career without suffering significant damage. Maybe Klobuchar thinks this red-baiting-lite will work, smearing the person rather than engaging his ideas. This is a traditional knee-jerk reaction among centrist Democrats when faced with people whose ideas are outside their own narrow comfort zone. Its analogue at the other end of the political spectrum shows up when Obama talks about people clinging to their Bibles and their guns, or Hillary calls them deplorables. This an elitist dismissiveness of other people that Sanders does not share.

Fearmongering about “socialism” may work with some people; others may actually hear what Sanders is proposing. Trump promised much of the same kind of relief to middle America and they voted for it, just as they voted for Obama for the same sorts of promises. There’s always a chance demagoguery will work. There’s also a chance clarity and consistency will work. That’s why Democrats need to run hard, not run scared. After all, most of what Sanders is promising are things a majority of Americans want.

Mayor Pete and the Spies Who Love Him

Americans Live With Socialism Every Day

We have long lived in a quasi-socialist country, with Social Security as the prime example among many socialist elements. The argument about choosing between “socialism” and “capitalism” is largely bogus —and a distraction from making serious choices about justice, domestic tranquility, the common defense, general welfare, and the blessings of liberty, those being the Constitutionally enumerated values to ensure a more perfect union.

There’s a joke making the rounds that goes like this: When did the Democrats lose the 2020 election? They lost the election when Obama, Pelosi, and the party leadership decided Tom Perez should lead the Democratic National Committee, choosing an establishment centrist over the progressive Muslim from Minnesota, Keith Ellison. Perez promptly appointed Ellison as deputy chair, but the joke illustrates the longstanding fault line between centrist and progressive members of the same party.

Sanders’s convincing victory in Nevada suggests the party rank and file have moved on faster than the party establishment. In 2016, party leaders managed to turn Nevada into a fixed election that chose Hillary Clinton. This time Nevada was apparently honest. But that didn’t stop the Democratic National Committee from stacking the audience for the South Carolina debate. It’s a long, nasty, twilight power struggle and it seems far from over.

American voters have voted for some version of hope and change in three consecutive presidential elections — 2008, 2012, and 2016. There is good reason to think most Americans remain unsatisfied with how their elections have turned out. While most of the political professionals, who have given us what we now have, want us to believe a Sanders nomination would be political suicide, that may be because they’re looking in a mirror and seeing a reflection of their own accomplishments.

Here’s a radical idea for Democrats: listen to the voters. It’s a little late to start telling the truth, but it can’t hurt.