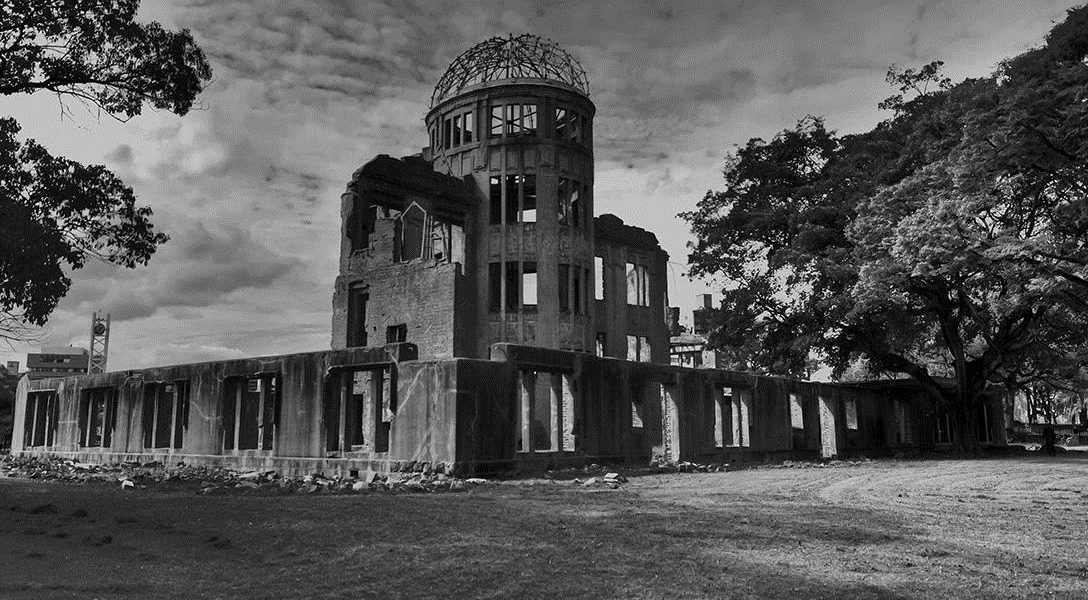 The “Peace Dome” or “Atomic Bomb Dome” of Hiroshima remained standing when the atomic bomb was detonated 1,968 ft above it.  Photo credit: Freedom II Andres / Flickr

This week, President Barack Obama became the first sitting US president to visit Hiroshima, Japan — site of the fateful atomic bombing attack on Aug. 6, 1945, that killed tens of thousands of Japanese citizens.

What follows is the final in a three-part series that first ran on March 16, 2014:

In the mid-1970s, Japanese activists discovered that few pictures of the aftermath of the atomic bombings of Hiroshima and Nagasaki existed in their country. Many of the images had been seized by the US military and taken out of Japan. The Japanese had as little visual exposure to the true human effects of the bomb as had most Americans. Activists, led by Tsutomu Iwakura, tracked down hundreds of photographs in archives and private collections, published them in a popular book and, in 1979, mounted an exhibit at the United Nations in New York.

There, by chance, Iwakura met Herb Sussan, a former network TV producer, who informed him about the existence of color footage shot by a US military film crew not long after the bombings. Sussan had been with the documentary crew, along with then-Lt. Daniel McGovern, a combat photographer and film director with the US Air Force. After a little digging, Iwakura found the color footage at the National Archives. About one-fifth of it showed the devastation at Hiroshima and Nagasaki. According to a shot list, reel #11010 included, for example: “School, deaf and dumb, blast effect, damaged Commercial school demolished School, engineering, demolished.  School, Shirayama elementary, demolished, blast effect.  Tenements, demolished.” Included were many minutes of stoic survivors sadly, or in anger, displaying their burns and scars.  The rest of the footage was shot in several other cities.

In short order, Iwakura raised half a million dollars from more than 200,000 Japanese citizens to buy a copy of the color footage. Then he traveled around Japan filming survivors who had posed for the US military cameramen in 1946. Iwakura completed his compilation film, entitled “Prophecy,” and arranged for the June, 1982, New York premiere described in Part 1 of this series. A few months later, brief segments of the McGovern/Sussan footage turned up for the first time in an American film, called “Dark Circle,” which was screened at the 1982, New York Film Festival. The film’s co-director, Chris Beaver, told me: “No wonder the government didn’t want us to see it. I think they didn’t want Americans to see themselves in that picture. It’s one thing to know about that and another thing to see it.”

Still, the historic footage drew little attention until the article on Sussan that I edited for Nuclear Times was published. It inspired a flood of inquiries at the National Archives.

“The main reason [the footage] was classified was because of the horror, the devastation. The medical effects were pretty gory. The attitude was: Do not show any medical effects. Don’t make people sick.”

It’s clear that certain people in the US government worked hard to keep the true effects of the Hiroshima and Nagasaki bombings from the American public. Who exactly was behind the cover-up?  McGovern told me,

“I always had the sense that people in the AEC were sorry they had dropped the bomb. The Air Force — it was also sorry. I was told by people in the Pentagon that they didn’t want those images out because they showed effects on man, woman and child. But the AEC, they were the ones that stopped it from coming out. They had power of God over everybody. If it had anything to do with nukes, they had to see it. They were the ones who destroyed a lot of film and pictures of the first US nuclear tests after the war.”

To walk in the footsteps of McGovern and Sussan, and meet some of the people they filmed in 1946, I made my own pilgrimage to the atomic cities in the summer of 1984.  (My “Atomic Cover-up” book and e-book has a lengthy chapter describing what it was like to interview survivors on-site.) By then, the US footage had turned up in several new documentaries.

In September 1985, Herb Sussan passed away.

Researching “Hiroshima in America,” a book I would write with Robert Jay Lifton in 1995, I discovered the deeper context for suppression of the US Army film: It was part of a broad effort, starting but hardly ending with the Manhattan Project, to suppress a wide range of material related to the atomic bombings, including photographs, reports on radiation effects — information that might have raised questions about the decision to drop the bomb.

A documentary film that drew on footage from” the McGovern/Sussan footage premiered at the Tribeca Film Festival in 2004.  It was called “Original Child Bomb” and won the top Silverdocs award. Later, the film aired on the Sundance cable channel. The film was unflinching and powerful, as its creators intended. It included unforgettable accounts from surviving witnesses, such as this one:

Americans who view the footage today can now judge why the authorities suppressed it, and what impact these images, if widely seen, might have had on the nuclear arms race — and could still have on the nuclear proliferation that endangers the world today.

Nine nations now have the bomb

After building first-strike weapons and detailing scenarios for their use, the temptation for any nuclear power to use them may one day become irresistible. Treaties today bar the use, testing or proliferation of nuclear weapons, but at least nine nations, with the addition of North Korea, now possess The Bomb. And every American president — except Eisenhower — has endorsed their use against Japan to help bring the Second World War to a swift close.

With terrorist organizations around the world itching to get their hands on a nuclear device, it’s hardly comforting to reflect that a line against using nuclear weapons has been drawn — in the sand.