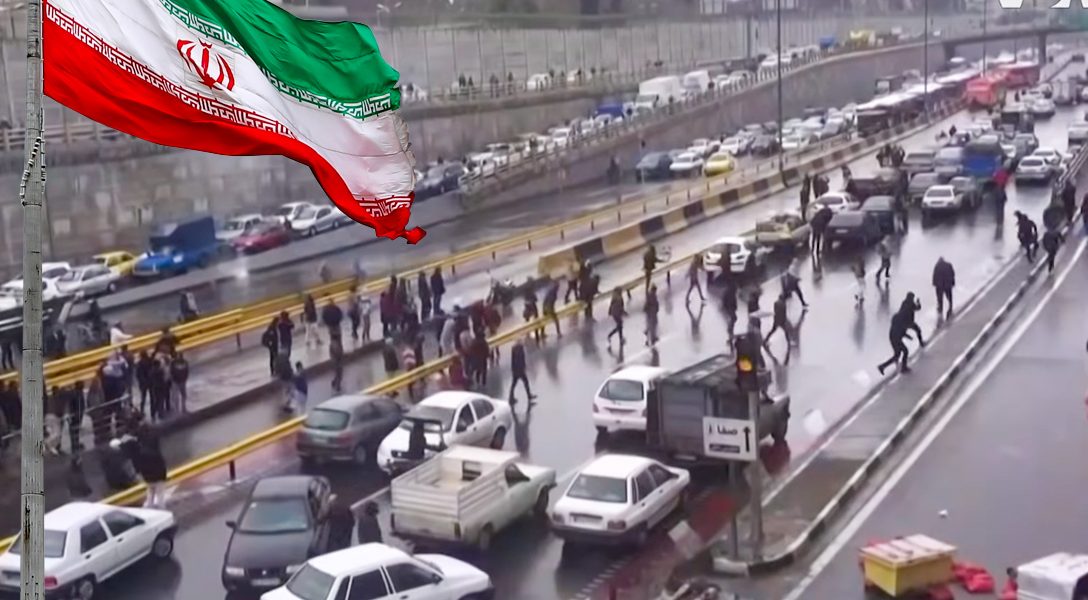 Protesters, outraged by up to 300 percent gas price increases, block highway in Tehran, Iran, on November 16, 2019. Photo credit: Adapted by WhoWhatWhy from VOA News / YouTube and Ninara / Flickr (CC BY 2.0)

The world knows little about the gas price protests in Iran that erupted on Saturday and quickly turned political — and possibly deadly. To prevent word from getting out, the country’s rulers put in place the biggest internet shutdown in its history. For now, that strategy seems to be working, as international media struggle to reach sources on the ground.

#IranProtests takeaway:
I've covered Iran for 25+ years. Never seen protests this brazen, this angry, this widespread.
This is serious. That's why there is a total Internet blackout. Regime is scared.#InternetForIran

But while reports of dozens of deaths are still difficult to verify, the few bits and pieces that are coming through suggest that the current unrest could be even bigger than the “Green Revolution” of 2009.

#IranProtests Then & Now.
2009: Protests went on for months & only garbage cans were set ablaze.
2019: Protests on day 3 have burnt down more than 100 government structures, per Fars News.
A decade of pent up anger, frustration, lack of hope & oppression.#اعتراضات_سراسرى

Images of crowds calling for the return of Reza Pahlavi, son of the late shah — are shocking, and a relatively new development on the Iranian political scene. Fears linked to Western subversion also run deep in Iran, where back in 1953 a CIA-sponsored coup restored power to Pahlavi’s father.

This is why #Khamenei was cursing #Pahlavi family yesterday. This is why he is scared. "Prince Crown (#RezaPahlavi), Where Are You? Help Us" This slogan was chanted by millions of Iranians across Iran within past three days.#RezaPahlavi is #Iran's Opposition Leader.#IranProtests pic.twitter.com/Y65y1JCipx

Iranian officials claim the US is behind the unrest — but some observers say that the Iranian government may itself have intentionally provoked the protests by suddenly hiking gas prices by up to 300 percent on Friday. The government has claimed that, with US nuclear sanctions back in place, the money from the increase will go toward subsidizing 18 million low-income families.

“I believe the regime is trying to provoke the people,” an Iranian dissident living in a country neighboring Iran told WhoWhatWhy, requesting anonymity for fear of persecution. “It knows that people are desperate and protests are coming, and it is trying to bring them forward before people have had a chance to organize better.”

“From Tehran to Beirut, one revolution that won’t die”

That would follow a pattern of alleged Iranian provocations against protesters in Iraq and Lebanon: Tehran has set up proxy networks and infiltrated much of the region, but has now become the target of discontent by large segments of the population in these countries.

#BREAKING: Two Battalion commanders of #IRGC's Fajr corps were killed by unidentified IRGC officers who refused to follow their orders to send snipers for killing unarmed protesters in #Shiraz! This has created fear among IRGC commanders of #Iran's Islamic Regime since morning! pic.twitter.com/mBYOUu6OIp

There are unconfirmed reports of mutiny among soldiers tasked with crushing the protests. Others claim that the infamous Basij militia has been ordered to take to the streets.