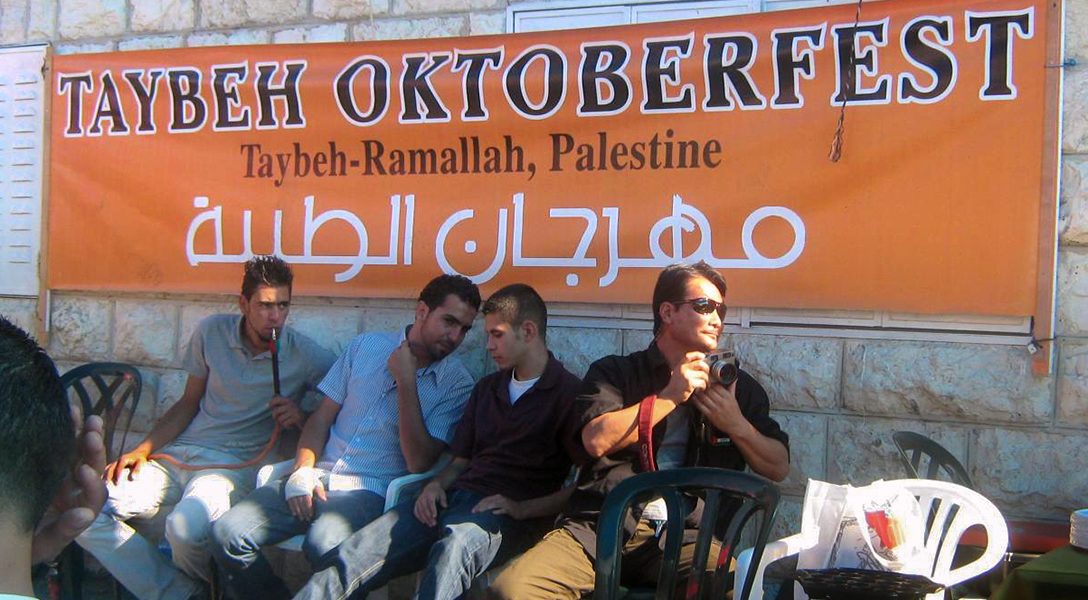 In a story published on September 11 about Palestinian beer brewers, the Associated Press (AP) issued a quiet correction triggered by a “communication” from the Committee for Accuracy in Middle East Reporting in America (CAMERA), a pro-Israel media watchdog.

“Veteran brewer Nadim Khoury, who launched Taybeh beer in the West Bank in 1994 and now makes 600,000 liters a year, takes pride in being the first to put Palestine on the global beer map.”

The AP subsequently changed the article after being contacted by CAMERA’s Israel office.

“…the Associated Press yesterday corrected an article which incorrectly referred to Palestine,” reads a statement on CAMERA’s website.

“…[R]eference to the West Bank or to Palestinian-controlled territories as ‘Palestine’ is not consistent with AP usage, and is misleading,” adds the statement. “The AP commendably updated the article, and replaced the reference to Palestine with the word Palestinians.”

The AP report is republished in two widely read Israeli publications, The Times of Israel and Haaretz.

The Times of Israel published early on the morning of September 12 with the altered usage of “Palestinians,” while Haaretz published with “Palestine” seven hours later.

Haaretz’s September 12 Hebrew print edition includes the updated AP story with “Palestine” replaced by “Palestinians,” according to an addendum to CAMERA’s original statement.

CAMERA’s issue comes from reference to “Palestine” as a place where Palestinians live, a standard refrain from the pro-Israel coterie being that there is no modern-day Palestine.

Most Israeli politicians and many commentators maintain this same logic.

The problem is that the Associated Press wire service — one of the world’s largest, with its stories republished daily by countless thousands of newspapers, broadcasters and other digital media — has surreptitiously conceded to pressure from a pro-Israel watchdog.

The article in question was updated the day after published, with “Palestine” changed to “Palestinians.” However, readers were left uninformed of the reason for the change; the only AP editor’s note refers to the corrected spelling of a name: “This story has been corrected to show that the Carakale brewing supervisor’s last name is spelled Wambeke, not Wombeke.”

The AP has not responded to WhoWhatWhy’s request for comment.

A quick search of recent AP articles shows little mention of “Palestine,” suggesting the pro-Israel organization may be correct in calling it a deviation from AP usage, but the bigger question it seems is the influence such an organization can have on journalists.

Media ethics expert Kevin Smith, the former ethics committee chairman of the Society of Professional Journalists for 23 years, says that “if AP violated its own style policy then it should change it.”

“But, I have serious concerns when a government-led agency whose sole existence appears to be controlling news content to its political liking gets to influence the news,” Smith cautioned in an email to WhoWhatWhy. “AP would have to demonstrate to its audience that what it did was wrong and share that with its readers. Otherwise, it appears suspicious.”

“Monitoring the press for accuracies is an age-old practice by people who generally are less concerned about unbiased coverage, but seek opportunities to bend the news to suit their agendas,” Smith added.

Note that Palestine is definitively regarded by international bodies and governments as a state separate and autonomous from Israel.

Resolution after resolution from the UN Security Council since 1947 corroborates this.

And 135 countries recognize Palestine as an independent state, although the US does not.

This is not the first time the AP has been criticized for unfairly covering Israel/Palestine. A 2013 AP report titled “Fatah rally in Gaza looks toward unity with Hamas” referred to “the Israeli cities of Jerusalem and Tel Aviv…”
While Tel Aviv is within the internationally recognized borders of Israel, Jerusalem is not and has never been internationally recognized as a sovereign Israeli city. Under the 1947 UN Partition Resolution which envisaged separate Arab and Jewish states, Jerusalem was designated a “corpus separatum,” meaning it belongs to neither.