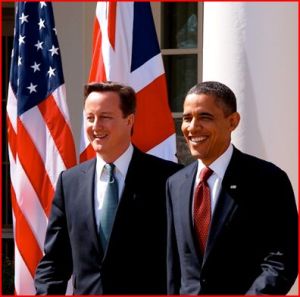 Are the U.S. and U.K. Imperiling Nuclear Non-Proliferation by Sharing Atomic Secrets? The United States now shares so many atomic secrets with Britain that many believe both countries are breaching the international treaty banning nuclear weapons proliferation, and risking the spread of warheads to other countries.

The “do as we say, not as we do” element of the U.S.-U.K. atomic cooperation is emboldening other countries with nuclear weapons capabilities that want to have the same kind of freedom to share atomic technology.

Article One of the Treaty on the Non-Proliferation of Nuclear Weapons (NPT) bans all countries that have nuclear weapons from transferring “to any recipient whatsoever” any weapon or control over any weapon “directly or indirectly.”

David Lowry, former director of the European Proliferation Information Centre, told WhoWhatWhy that analysis of interpretative memoranda from the Foreign Office in the late 1960s reveals officials clearly intended the “indirectly” to cover the kind of activity now undertaken by Britain and America, i.e., the sharing of sensitive information about weapons, and not just the weapons themselves.

“You can see what they meant by those articles quite clearly,” he says. “Once they got the non-nuclear states to sign up to it they backtracked and said, ‘It doesn’t apply to us’.” Thanks to Khan’s past proliferation activities, Iran now has a uranium-enrichment complex based on the Pakistani model. And Khan is suspected of sharing enrichment technology with North Korea. It’s still not clear whether he did so with the sanction of the government of Pakistan, which is—like Britain and America—an NPT signatory.

The depth of the U.S.-U.K. cooperation will doubtlessly be a focus at next year’s review conference for the NPT. Nations that don’t have nuclear capabilities are expected to be critical of the limited disarmament steps taken since the last summit in 2010.

“The close collaboration between the U.S. and U.K. over their nuclear arsenals remains not only a breach of the spirit and letter of the NPT but a huge symbolic roadblock to disarmament,” Kate Hudson, general secretary of the Campaign for Nuclear Disarmament, told WhoWhatWhy.

“It is a useful barometer to ask: would the U.S. or U.K. tolerate other states doing the same? Of course the answer is no.”

For decades Americans have been sharing their atomic secrets with the British. The Eisenhower administration approved the first Mutual Defence Agreement (MDA), allowing the U.S. to get its hands on Britain’s civil-energy plutonium stockpile in 1958. Since then the nuclear partnership has continued unopposed. The latest version of the MDA is up for renewal later this year.

In terms of sheer numbers, both countries are slowly whittling down their nuclear arsenal. Last month, the U.S. government released the precise number of its nuclear weapons for the first time since September 2009: it’s now at 4,804, down from 5,113. The British are currently reducing their stockpile to somewhere in the 120-160 range.

What’s causing disarmament experts to worry is the extent to which technical knowledge is being shared between the U.S. and U.K. This is facilitated by a cross-Atlantic exchange of personnel. Paul Flynn, one of the few British legislators who has raised red flags about the collaboration, recently discovered that right now there are two staff from the U.S. Department of Defense in Britain. And there are 15 staff from the British Ministry of Defence in the U.S.

One cross-Atlantic project reaching an advanced stage is the design of what experts call the guts of the next-generation nuclear submarine. The core missile compartments, the cruise quarters and the main part of the command-and-control communications facilities within the submarine will all be identical in British and American subs.

“It’s a deeper step than previously into a shared submarine capability,” says Paul Ingram, executive director of the British-American Security Information Council, which advocates for non-proliferation.

That kind of cooperation ultimately saves a lot of money for both nations through shared development costs. France, which has a more independent nuclear weapons infrastructure, spends twice as much as the U.K. does for the same result. It’s no surprise, therefore, that in a 2013 report from the Royal United Services Institute, the authors concluded that “collaboration between the two countries under the MDA has evolved to the extent that the boundary between the design and construction of U.K. and U.S. warheads has blurred.”

This is why some believe the arrangement is now so deep it leaves both Britain and the U.S. in breach of the NPT. Lowry, formerly of the European Proliferation Information Centre, is among them.

“None of it is permissible in my view. For 40 years the U.S. and Britain have completely ignored that because it doesn’t suit them,” he told WhoWhatWhy.

Fitzpatrick, from the International Institute for Strategic Studies, says the whole issue may not matter at the state-to-state level where diplomacy is conducted. He says: “No country that is considering proliferation would think about whether the U.S.-U.K. nuclear cooperation provides a precedent or an incentive or in any way would justify such proliferation.”

The Proliferation of Distrust

And yet Fitzpatrick recounts how on a trip to Pakistan in May he found supporters of Khan citing the U.S.-U.K. relationship as an example of countries giving themselves the green light to go ahead.

The issue could very easily come up at next year’s summit in New York to review the treaty, when tensions are likely to be running high over the failure of nuclear-armed countries to make much progress on disarmament. Heather Williams, an American research fellow at the think tank Chatham House, warns:

That matters, because it’s about more than just diplomacy. If the ongoing talks with Iran over its nuclear program break down, a country like Pakistan could well decide to help Middle Eastern states like Saudi Arabia get their own nuclear capabilities.

“We doubt they would do that,” says Fitzpatrick. “There’re many disincentives for Pakistan. But I suppose most worrisome is the possibility that retired Pakistan nuclear weapons scientists could be lured to Saudi Arabia.”

With so much at stake, you’d expect this year’s U.S.-U.K. renewal of the MDA to be a big deal in both countries.

We Won’t Tell If You Won’t

Why, then, has there been virtually no debate about this issue in either the Houses of Parliament in London or in Congress? The answer, Ingram believes, lies in credibility. Neither country wants to draw attention to the fact they are not fully independent nuclear states.

American interests, moreover, rely strongly on their extended nuclear deterrent: the idea that if any ally of the U.S. gets hit, the aggressor will have the U.S. to reckon with. “They do not want the Saudis to be deploying their own nuclear weapons—it gets out of control,” Ingram says. “So they provide an extended nuclear deterrent, explicitly to their allies in NATO, and less explicitly to other allies.”

The reasons may be more practical than that.

“It’s proven to be mutually beneficial for both sides, both politically and financially, so there hasn’t been a real need to raise it as an issue,” American think-tank expert Williams says.

This year the renewal of the MDA will receive limited scrutiny on both sides of the Atlantic. British opponents of the treaty expect it to be rushed through the House of Commons at the last possible moment, “at about 5 p.m. on the last day before Christmas.” according to Flynn, the Labour Party veteran.

“We’re living in an anti-democratic bubble as far as security and planning for weapons is concerned,” he says. “It’s a good idea, democracy. It started 2,500 years ago in Greece. It’s coming in slow stages but it hasn’t got through to the defense sector just yet.”