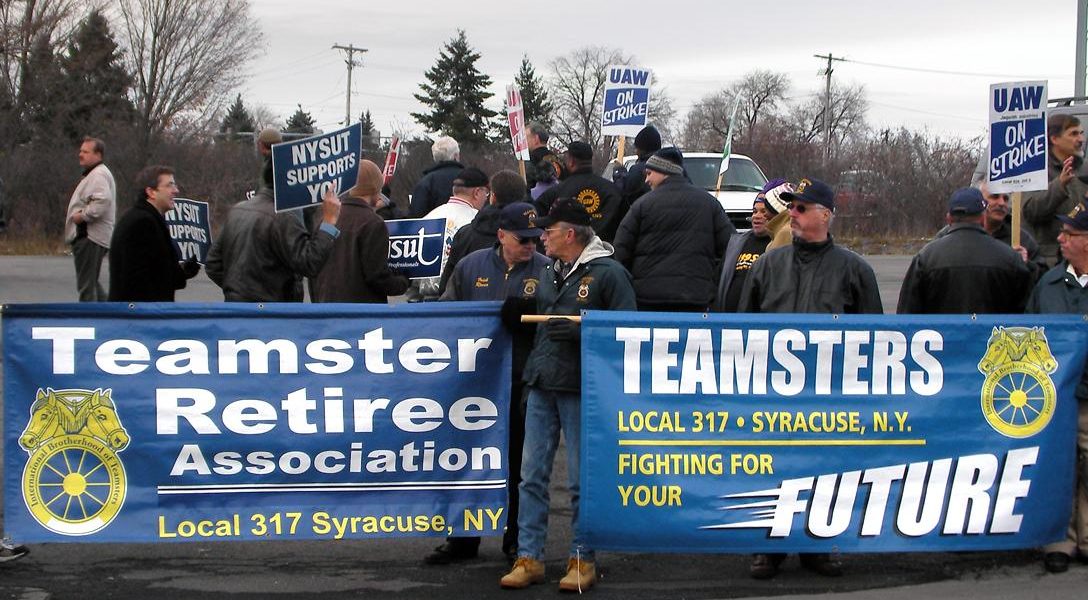 Thousands of Teamsters retirees from across the country will rally in Washington, D.C. today. "The retirees will gather outside the Capitol to call on Treasury to deny the proposal by Central States to make drastic cuts to their pensions. They will also ask members of Congress to help find a legislative solution to the fund's problems." About this photo: Local Teamsters protesters in Syracuse, New York Photo Credit: Bernard Pollack / Flickr (CC BY 2.0)

Why the Navy Didn’t Shoot Down Russian Jets (Gerry)

In the journal Navy Times, retired commanding officer Rick Hoffman explains,“You don’t get to kill people just because they’re being annoying. Only in the movie ‘Top Gun’ does a war suddenly break out between two airplanes that is completely not related to something going on ashore.” The Navy Times speculates that the “simulated attack” was likely a public relations stunt for Russian President Vladimir Putin, showing force against the Americans operating in his backyard.

On Tuesday, when the IMF releases its latest World Economic Outlook report, it is expected to further slash forecasts for global growth and sound fresh alarm over the state of the world’s economies.

CIA Behind Panama Papers? This Whistleblower Thinks So (Reader Jared)

“The CIA I’m sure is behind this, in my opinion,” says Bradley Birkenfeld, who in 2005 blew the whistle on Swiss bank UBS.

If You Think Voter ID Is About Voter Fraud, This Republican Congressman Has News For You (Trevin)

Watch Rep. Glenn Grothman (R-WI) admit to a reporter that thanks to “photo ID,” a Republican presidential candidate might finally now win the state of Wisconsin.

No, it won’t solve all of the problems. Nevertheless a step in the right direction.

Black Lives Matter vs. the LAPD: Are the Police Unfairly Targeting & Surveilling the Movement? (Trevin)

Criminal defense and human rights attorney accuses LAPD and the City Attorney’s Office of operating an informal “political prosecution unit” dating back to the Occupy movement. The unit allegedly monitored social media and tapped phones for information on activists, who were then targeted for arrest and prosecution.

The group Created Equal can continue posting the graphic billboard of company Stericycle’s CEO and others next to an image of an ‘aborted child’ with the hashtag ‘Killers Among Us’, says an Illinois judge.The ruling comes despite Stericycle having no involvement with abortions or the procurement of fetal tissue.

Another Tax Dodge For Billionaires (Jeff)

States with low or no income taxes increasingly seem to be drawing 1 percenters from the finance industry. Unlike many types of work that must be done on-site, investing firms can be run from just about anywhere, as long as a major airport is nearby.

If you think you’ve seen it all this election cycle, think again. Here is the story of Ted Cruz’s college roommate revealing that the Texas senator was an…ahem…hands-on student in college.