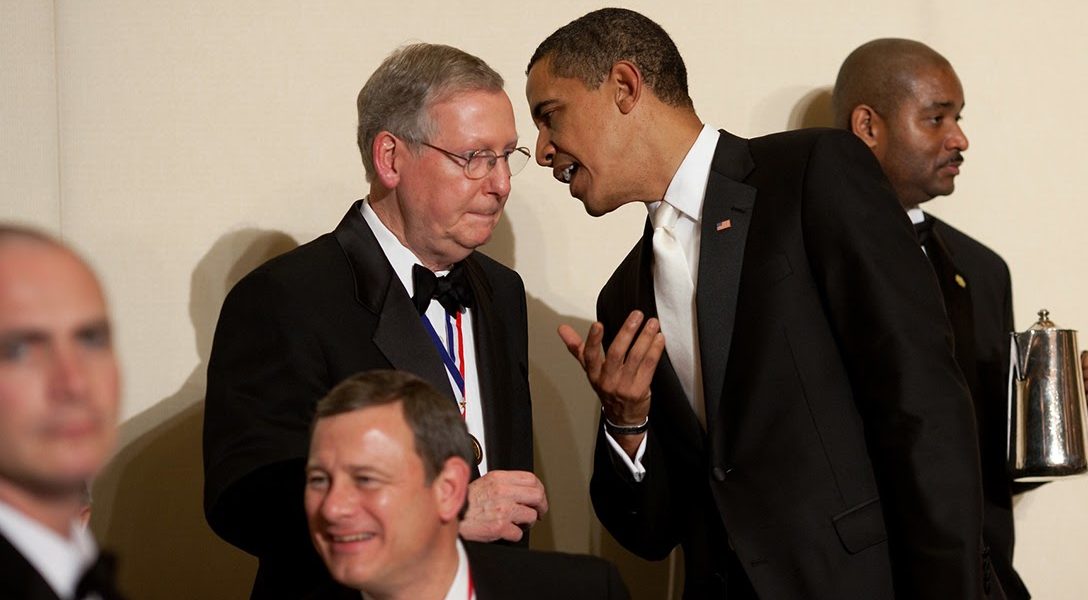 Even President Barack Obama couldn’t ignore the Alfalfa Club. In 2009, he was the keynote speaker at the dinner, and mingled with the likes of then–Senate Minority Leader Mitch McConnell (R-KY) and Supreme Court Chief Justice John Roberts. Photo credit: The White House / Wikimedia

I have no idea why four tweet threads concerning the Alfalfa Club were deemed “unavailable” by Twitter when we checked on Sunday. On Saturday, the club held its famous dinner in Washington, DC.

But those silenced tweets seem like a good metaphor for the ultimate insider event. The Alfalfa Club’s sole purpose is to hold one glitzy dinner once a year, to celebrate, so the story goes, the birthday of Confederate general Robert E. Lee.

The club, founded in 1913, got around to admitting African Americans in 1974. It didn’t admit women until 1994. Legend has it that the club was named after the alfalfa plant because of the plant’s thirst. The name implies that its members, like alfalfa, will do “anything for a drink.”

You have to be invited to join the Alfalfa Club — you have to be rich and famous or rich and powerful, or just rich or maybe just powerful to be accepted.

Members have included presidents, Supreme Court justices, senators, and billionaires. Lots of billionaires. Big-name journalists, who also attend, and who revel in the idea that they speak truth to power, seem to find no irony in their presence at the event.

President Barack Obama was the keynote speaker in 2009. He remarked that if Lee were attending the event, he would have been 202 years old and “very confused.”

When he once again accepted an invitation in 2012, Obama quipped that he wanted to get out of the White House “bubble” and commune with “ordinary” Americans. That year, the ordinary folks glitter-bombed Sen. Mark Warner (D-VA) and then-Senator Joe Lieberman (I-CT) as they entered the dinner, always held at the Capital Hilton.

What happens at these dinners is mostly secret. Jokes from some presidents who address this exclusive club do get out, but nothing substantive. Sen. Mitt Romney (R-UT) was the keynote speaker this year. Ben Stiller was his guest. (President Donald Trump has been invited, ever since he was elected, but has never attended.)

And that’s its value. It’s one of the few places left in Washington where pretenses can be dropped. These are the folks for whom the status quo works just fine.

Don’t think for one minute anything as serious as an impeachment would prevent the elite from having a good time. There were at least two afterparties. At the party at the posh Georgetown watering hole Cafe Milano, guests included Warner and fellow Democratic Senator Chris Coons (DE). Journalist Bob Woodward was seen conversing with Secretary of Defense Mark Esper.

Jeff Bezos, owner of Amazon and the Washington Post, hosted a party at his home after the event, which drew major Trump administration movers and shakers, among them Jared Kushner and Ivanka Trump, Kellyanne Conway, and Secretary of Transportation Elaine Chao, who is also the wife of Senate Majority Leader Mitch McConnell (R-KY). McConnell is a former Alfalfa Club president, but it’s not clear whether he made it to Bezos’s mansion in DC’s tony Kalorama neighborhood.

What happened at Bezos’s party? We can only speculate. Perhaps Microsoft’s Bill Gates congratulated Jamie Dimon for steering JPMorgan Chase into its most profitable year on record. Can’t you picture former Obama press secretary Jay Carney and his wife, ABC correspondent Claire Shipman, chatting up former Secretary of Defense Jim Mattis? CBS news anchor Norah O’Donnell probably didn’t feel like an “enemy of the people” at this event. We’re sure Robert Allbritton, the founder of Politico, felt right at home.

At a dinner a few years ago, one Alfalfa guest said that the event is “about relationships” in Washington. That is absolutely true.

But don’t think for a second that this reflects bipartisan comity. The “haves” with power seek an understanding with one another, in private. And the public is none the wiser. The status quo keeps all of them afloat, and it takes precedence over all other values. No matter what crisis the country is experiencing, these folks get dressed up and pretend that, really, nothing has changed or will change. Power remains with the wealthy and privileged, no matter who holds political office. Their slogan is: Don’t rock the boat.