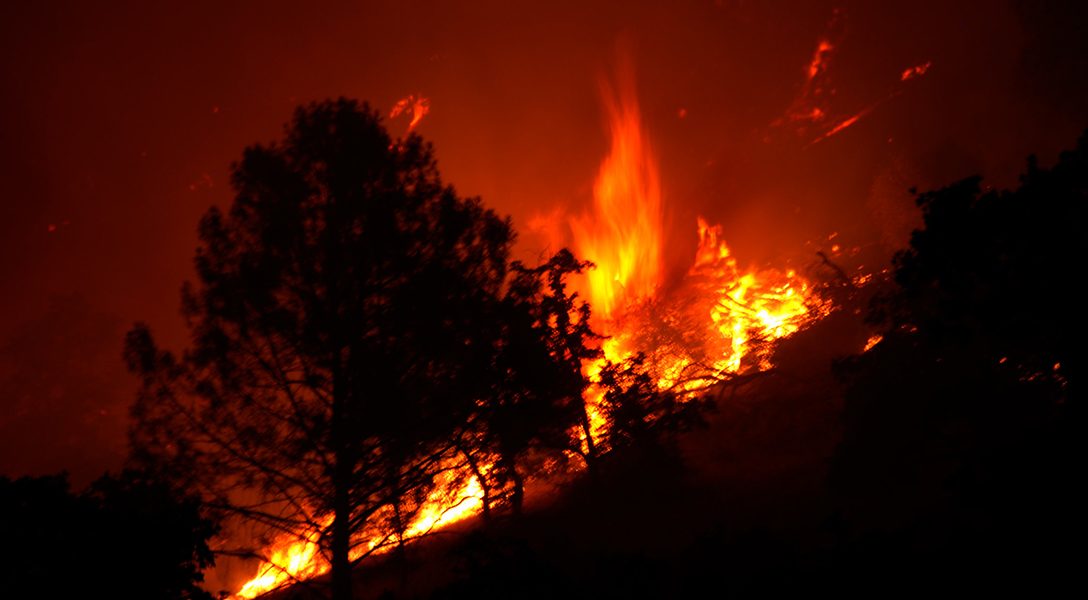 The following is WhoWhatWhy contributor Steve Pizzo’s firsthand account of what it’s like to watch the world go up in flames.

Well, folks, after six days with no power, no natural gas, no internet, no TV, no modern conveniences… we emerge emotionally exhausted but physically intact.

It began Sunday night when our local air raid horn would not stop blaring… which scared the hell out of my wife, who insisted we join the long lines of bumper-to-bumper cars trying to get out of Dodge… at 5 miles per hour. Stayed that night at our son’s place in San Mateo. But the next morning I decided to head back into the evacuation zone.

I had carefully examined the topo maps and wind forecasts and had figured that the fire, which at the time was still about 15 miles to our northeast, would not come within 5 to 7 miles of our ranch. So we headed back. Had to come in on the back roads to avoid the police roadblocks. When we got home it was a hellscape. The sky was a sickly yellowish-white from the fresh smoke and we could only see about half a mile. The trees across our little valley were obscured. White ash fell like snow. It felt like we were trapped in an apocalyptic snow globe.

Sunday night was a nailbiter: 102-mile-per-hour winds were pushing the fire in our direction.

Of most concern was the city of Windsor, a suburban area northwest of Santa Rosa with several thousands of homes. Firefighters feared a repeat of the 2017 fire that burned down over 6,000 homes in northeast Santa Rosa. (If you wonder how I know all this it’s because I had invested in a battery-operated police/fire scanner and was plugged right into the action.)

They quickly moved 2,500 firefighters to north Windsor to make a stand. The hurricane-force wind was blowing the fire right into their faces, like a blast furnace. All night and well into the early morning they fought that beast and stopped it just feet from the Windsor border. We had the car packed and ready to bug out if they failed.

That was the turning point. We had one more “wind event,” as they like to call it, Tuesday night, but top winds were only 50 miles per hour this time. The fire continued to spread, but not in our direction. Sunday it was at 10,000 acres. By Wednesday morning it had reached 68,000. I have to say, having spent six days glued to my scanner, the police (who came in from as far away as LA), CalFire, the National Guard and, surprisingly, PG&E personnel did a heroic job this past week. Evacuations were orderly. Repopulation later in the week was well managed. All in all, it renews faith in government (at least at the local and state level).

Also yesterday was the first day we ventured out in the car to hunt up much needed supplies. Before that, we were afraid to leave because we were in a mandatory evacuation zone and, if caught at a roadblock, they would have escorted us back out of the area. Which would have been awful for all our farm animals and numerous pets. But, knowing all the back ways around this rural area, we chanced it, and went to the nearest city with electricity just south of Santa Rosa.

In going, we passed a field of about 100 acres that was filled with more emergency equipment than I’ve seen in pictures of the D-Day landings. It was a PG&E emergency camp. There were hundreds of white trailers, trailer dormitories for their workers (many of whom had come from all over the state), trucks, tractors, helicopters (they had 42 choppers just to search for damage of lines due to high winds). It made me start wondering about all the talk from Sacramento about a state takeover of PG&E. As bad as PG&E has been in spending on its infrastructure, I do have to wonder if any government agency could have assembled and deployed such an armada in less than 48 hours. It was truly impressive.

I now believe the state should reformulate its toothless Public Utility Commission to, in the future, force PG&E to spend on grid and network infrastructure before it allocates a dime to its executives in bonuses or to its bondholders.

Well, anyway, we are fine, if exhausted by it all. Took our first hot baths in six sweat- filled days. The 25-foot self-contained travel trailer I bought a few years ago as a hedge against our house falling down in an earthquake was a life saver. Though it had limited propane storage, about 50 gallons, it gave us heat when we needed it most, in the early morning hours. It has a stove and furnace and lights. We scuffed our way out there in our robes and slippers to heat coffee and fix a primitive breakfast. I finally had a chance to try my ten-year-old military MREs, and have to recommend the ones that contain the poppy seed sponge bread. Five-star stuff when you’re suffering. Vinnie, our parrot, complained throughout at the quality of the handouts we had to offer. “Vinnie wants A COOKIE” he would shout. He’s lucky we didn’t eat him.

On the positive side, it was all a good stress test for our emergency preparedness. I had thought I was pretty well covered, but discovered some holes in our fortifications. Like having spare spark plugs for our two generators. Luckily our vintner neighbor was also a scofflaw and had remained in the evac zone. He searched his shop and found an old plug that worked. Otherwise we would have been in deeper doo-doo. So, some extra stores will be gathered to fill such gaps.

So now back to normal. I hear the rest of the world continued on. Something about impeachment, was there? Some terrorist leader was killed in hand-to-hand combat with Trump personally?