Once upon a time, it was very cool to be a young guy wearing no pants sliding across the floor of a living room in socks and y-fronts, and it was cool to run a prostitution ring out of your parents’ suburban home, and it was also cool to wear Ray-Ban Wayfarer sunglasses. It was especially cool if you could be Tom Cruise while doing this. (Though contrary to Mandela Effect conspiracists, he did not wear the shades while doing the dance scene.)

Times, they change, even if Cruise apparently does not. And while some of the above may no longer seem as appealingly rebellious as it was when Risky Business came out in 1983, the Wayfarers have maintained their patina of cool.

More or less. Turns out, “cool” is a moving target. When they debuted in 1952, the plastic frames became a hit with men and women. They enjoyed icon status on the faces of Marilyn and Dylan before the cocaine-fueled fashion excesses of the 1970s downgraded them in favor of Dior disco shades. Sales sank. Ray-Ban’s cunning recovery move? Pay for product placement in the early ‘80s to land the Wayfarers in movies. Sales leapt skyward again… and then had another slump in the ‘90s, before settling into some kind of emeritus cool status here in the 21st century.

All of which is to say that Ray-Ban has always had a keen sense of how to steer itself for maximum “cool”… and whatever year-over-year profits result from “cool.”

The company’s latest gambit is something called “Ray-Ban Stories.” It is the result of a partnership with Facebook, which is running neck-and-neck in an ongoing race for the title of “Least Cool Company in the World” alongside ExxonMobil, Nestlé S.A., and the marketing company that came up with the name “Dress Barn.”

The glasses have a camera and three (!) microphones, so they can take photos and record video and audio. They can also play your music through tiny speakers, which is, I suggest, very cool. All this, available in 20 different styles and a bunch of colors, starting at $299.

Why would Ray-Ban partner with Facebook? It is the eyewear company’s latest gambit to stay relevant. Per Ray-Ban’s website: “From the rock revolution of the ‘60s, to the art scene of the ‘80s, to the forefront of hip-hop culture — Wayfarer has become an enduring icon across endlessly shifting horizons. Now the journey continues with the latest in wearable tech. Ray-Ban Stories Wayfarer integrates the best of your phone with the timeless frame, bringing you a new way to capture and share your adventures.”

Why would Facebook partner with Ray-Ban as opposed to designing their own sunnies? To piggyback on the company’s rep, of course. It is the latest attempt by Big Tech to Make Surveillance Cool.

A Brief, But Cool, History of Glasses that Spy

I was living in San Francisco when Google’s goofy futurist eyewear, Glass, hit the scene in 2014. And when a Glass-wearer named Sarah Slocum wore a pair into the Haight Street punk-rock bar Molotov’s, which kicked off The Bar Fight Heard Round the World. Branding-wise, Glass conflated the uncoolness of clunky tech with the uncoolness of privacy invasions. Losses all around!

Two years later, the social-networking outfit Snapchat debuted its own spy-glasses with such optimism for the product that the company rebranded as Snap Inc., a camera company. The Spectacles were a bit cooler looking: They look more like Wayfarers, whereas Glass looked like half-formed Oakley Razorblades worn by a bass fisherman of the future.

This style improvement hasn’t proven significant, in part because of the peculiar existential fact that though Snap Inc. has a $126.6 billion market cap (at the time of writing), no one ever seems to talk about it or think about it much here in the TikTok era. Which is very uncool.

(Snap Inc.’s latest iteration of their Spectacles plunges the wearer into augmented reality, but that might just end up backfiring, infecting AR with the cultural amnesia afflicting Snap Inc. generally.)

Anyway, balancing coolness and privacy concerns is what Facebook is up against now. The coolness is taken care of: The Ray-Bans have no Facebook branding. No one will know you have the Facebook sunglasses. Which makes the privacy issue an even bigger deal. 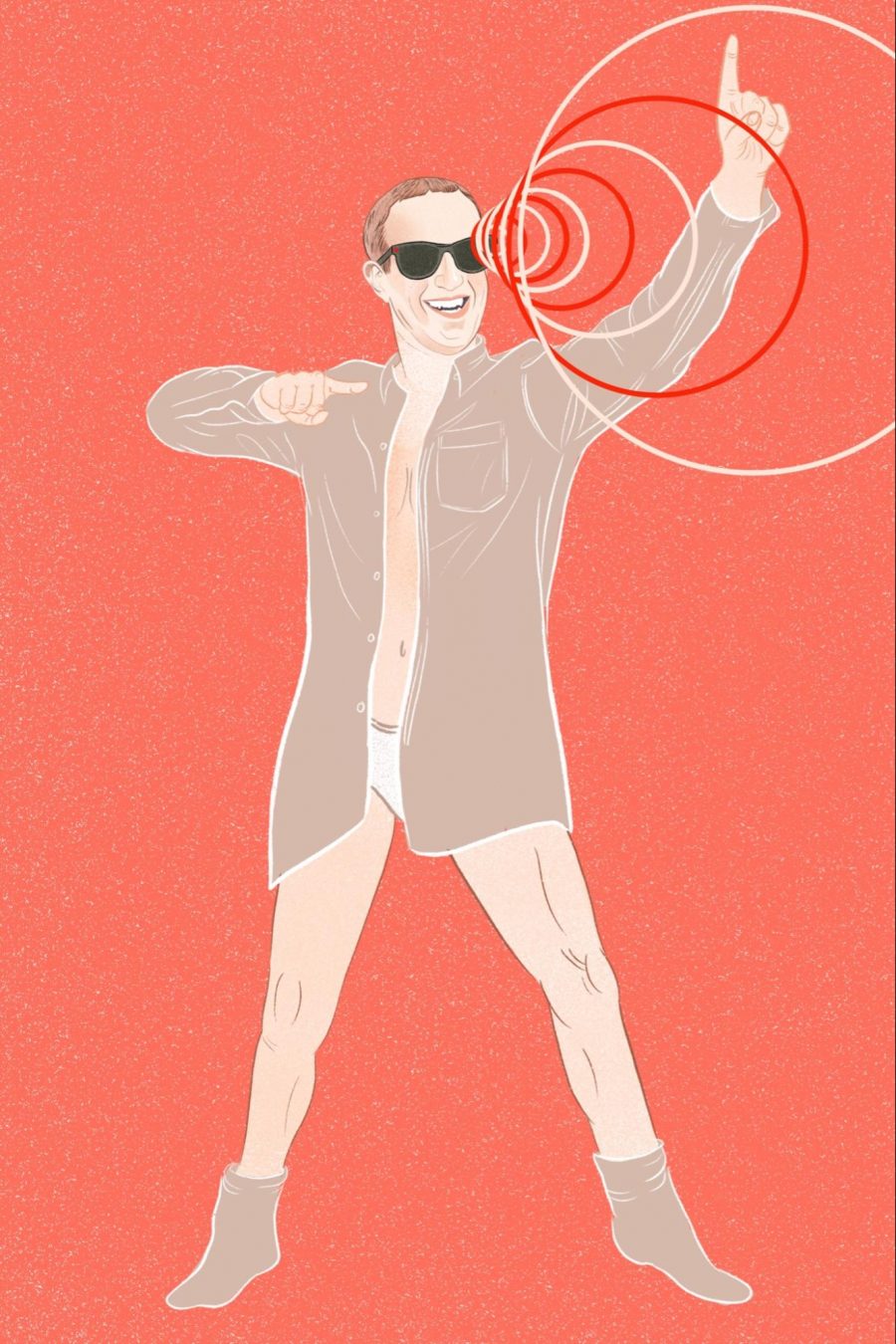 Facebook has anticipated pushback on privacy, but its response has mostly focused on the handling of the Cool-Glasses-Wearer’s data. Facebook says it won’t use recorded audio or video for personalized ads (though if you upload it to another app, good luck). But the glasses do make it easier for us to create content that we will of course post somewhere that does sell that data. Why else buy the glasses if not to create shareable content?

Even if only, say, 5 percent of that new content ends up on an app that monetizes such things, we’re still talking, what, hundreds of millions of dollars in personalizable ads? And because you’re a cool person creating all this profitable content on cool gear, it doesn’t set off the same privacy alarm bells as lame old CCTV. The Terms of Service agreement also claims to give you control over your metadata, as well as offering tools to (get ready for some 21st century weirdness) keep your sunglasses from getting hacked.

Its concession to everybody else in the world who might fall under the glare of your extremely cool robo-voyeurism: a tiny recording light.

As BuzzFeed News reporter Katie Notopoulos pointed out in her test drive, the potential consequences range from recording people out in public without their knowledge, to secretly recording for the purposes of blackmail or revenge.

And that tiny light is easily defeated by black tape. Facebook contends that hiding the recording light is a violation of the shades’ Terms of Service, a statement that is the big snuggly cable-knit sweater of legal protection Facebook puts on to enjoy the hygge of no-responsibility. I don’t care what you say — as metaphors go, that one is very cool, and therefore appropriate for this piece.

Spying Ain’t Cool Unless I Do It to Myself

Fears of rampant, constant surveillance predate Facebook’s new glasses. Everyone’s got high-end recording equipment in their pockets, governments are using drones to monitor protests (with military-grade stuff potentially on the way!), and our doorbells snitch on the neighbors (and ourselves). Fears of cameras have been around as long as there have been cameras.

But governments are uncool, doorbells are uncool, drones are uncool, and police may not be as cool now as they have been in basically every action movie except Bad Lieutenant. (Keitel was admittedly cool in that, but in a bad way.) So there’s still pushback to surveillance.

Yet we’re of two minds, culturally. Because we also love self-surveillance. How else to think about Facebook and Instagram and that other company — the yellow one? With the ghost logo? Um… Snap Inc.! Yes! Deliberately spying on yourself and your friends and family: a pastime or an essential cultural connector?

Facebook’s newest product aims to insinuate itself subtly — no bar fights here — and gradually erode our resistance, slowly lapping away at the retreating shorelines of privacy. Now, there’s still a performative aspect to recording: You pull out your phone and point it at something. It could be concealed and recording surreptitiously, of course, but generally speaking, when we see an iPhone, we know it as a recording device.

The Facebook/Ray-Bay Snoopervision specs are more akin to other pieces of wearable tech, but with an important difference. Where self-monitoring is passive and ongoing with the Apple Watch or Fitbit, Facebook is pushing us closer to a world of recording as a default — making the creation of a 30-second video clip just that much easier.

And, too, as we move toward near-instantaneous uploading, those personalized ads become better able to shoo us toward that restaurant a block away, or that clothing store around the corner. The sunglasses refine and extend what’s already going on with data and privacy, and the way they do it might be as simple as reducing the barrier to entry that is: your pocket. The device is already on your face, where cameras go.

Surveillance as the Height of Fashion

In this, Facebook is exploiting the playbook of a legendary designer and engineer named Raymond Loewy. Loewy introduced a concept called MAYA: “Most Advanced Yet Acceptable.” He demonstrated that the public is most inclined to adopt a product or service if it’s neither too new nor too familiar. “As a result, they gravitate to products that are bold, but instantly comprehensible,” writes Derek Thompson in The Atlantic.

Thompson says that MAYA is alive and well in Facebook’s homeland:

“In Silicon Valley, where venture capitalists also sift through a surfeit of proposals, many new ideas are promoted as a fresh spin on familiar successes. The home-rental company Airbnb was once called “eBay for homes.” The on-demand ride-hailing companies Uber and Lyft were once considered “Airbnb for cars.” When Uber took off, new start-ups began branding themselves “Uber for [anything].”

What’s new is… the old. Facebook hopes the public will adopt their shades not because they look cutting edge, but because they look like they’ve been with us forever. They hope the practice of active recording eventually gives way to an acceptance of constant, passive recording, because that’s where valuable new shoals of behavioral data may be discovered.