The reaction chamber of the DIII-D, an experimental tokamak fusion reactor, operated by General Atomics in San Diego, which has been used in research since it was completed in the late 1980s. Photo credit: Rswilcox / Wikimedia (CC BY-SA 4.0)
Environment Technology

I’m sorry to disappoint you. This article won’t help you discover new ways to use delicious French sauces in a Chinese stir-fry. I’m going to talk about physics — in particular, the energy source for the sun and the hydrogen bomb. This article will be an introduction to fusion energy. Part 2 next week will be a status report on cold fusion — a “dangerous” idea since 1989.

An atom has two parts. The nucleus is a small central core with neutrons and protons stuck together. The electrons whiz around in a much, much larger cloud, moving so fast that quantum uncertainty says you can’t even tell where they are or which electron is which.

(I am using the word “volts” throughout this article as a measure of energy. Technically, voltage measures the energy in each electron, and physicists use the word “electron-volt,” abbreviated eV, as a unit of energy. One eV is the amount of energy carried by each electron in a one-volt battery. The energy of electrons in molecules is measured in eV, and nuclear energies are measured in MeV = million electron volts. From here on, I’ll just say “volts.”)

All of chemistry is based on the exchange of electrons or the sharing of electrons among atoms. A flame or a typical flashlight battery or salt dissolving in water or photosynthesis – which plants use to turn H2O and CO2 into biomolecules — all these are examples of chemistry, and they are all working with energies of two volts or less.

The energy in the nucleus is measured in millions of volts. The nucleus is held together by a force that some unimaginative physicist named the “strong force” — and that is the name by which physicists still refer to it today. You may wonder why all those protons would stick tight in the nucleus since they each have a positive charge, and positive charges are supposed to mutually repel one another. The answer is that there is a balance between the electrical force that tends to tear the nucleus apart and the strong force that tends to hold it together.

This balance between electric repulsion and “strong” attraction is different for different kinds of atoms. Remember, we’re dealing with millions of volts — millions of times the energy of fire. The uranium nucleus is the largest found in nature (92 protons), and if you can split a uranium atom into two smaller nuclei, the process releases 200 million volts. This process is called fission. In August of 1945, millions of innocent citizens in the cities of Hiroshima and Nagasaki had a direct experience of 200 million volts in action.

Hydrogen is the smallest nucleus found in nature, with just one proton. Two hydrogen nuclei can be joined together to make helium (two protons), and in the process, 24 million volts are released. This is called fusion. (Yes, small nuclei want to come together to release energy, and large nuclei want to break apart to release energy. The happy midpoint is iron, whose 26-proton nucleus doesn’t want either to split apart or to join together. Boring!)

Hydrogen undergoes fusion inside a thermonuclear bomb, aka a hydrogen bomb. The process also happens at the center of the sun, providing the energy to keep the sun shining for billions of years.

The protons in hydrogen are positively charged, so they don’t spontaneously get close enough to stick together. The positive charges make it difficult to get two hydrogen nuclei close enough to fuse into helium. (Ordinary hydrogen nuclei, having only a single proton and no neutrons, are unique among the elements in having no strong force. Bombs and fusion reactors use heavy hydrogen, with extra neutrons that make it easier for two hydrogens to stick together.) The amount of energy required to push the nuclei together is about 4 million volts. So, 4 million volts in, 28 million volts out — a big net plus. But where can we find the 4-million-volt primer?

The center of the sun is hot enough that hydrogen atoms can get the energy needed to fuse into helium, but not all at the same time, so that the process happens slowly and the sun lasts billions of years. In a thermonuclear bomb, the temperature gets even hotter than the sun, and the fusion is instantaneous. There is a shell of uranium with hydrogen on the inside. When the uranium explodes via fission, it heats and compresses the hydrogen, and hydrogen fusion produces a far bigger explosion than from uranium alone. (The 20 million volts from hydrogen may seem much smaller than 200 million volts from uranium, but hydrogen is much lighter and cheaper than uranium, and a bomb of equivalent weight and price can contain much more of it.)

Fission doesn’t have to be inside a bomb; controlled fission is what drives a nuclear power plant. Ever since the concept of hydrogen fusion was proven (in bombs), there has been the dream of controlling fusion, a little bit at a time, to release energy for an electric power plant. The promise is enticing.

But getting the two hydrogens close enough to fuse is a daunting prospect. Nuclear physicists and engineers have been working on it for almost 70 years. Many tens of billions of dollars have been granted by the Department of Energy and its predecessors since the 1950s, and the project is still far from creating a commercially viable fusion machine. In my opinion, the funding is kept alive by the lobbying power of established scientists, which is strong enough to get their contracts renewed year after year.

Strategy number one is the tokamak, in which an electric current is used to heat the hydrogen to millions of degrees.

It’s not hard to send an electric current through hydrogen gas when the hydrogen is in its plasma state, with electrons separated from the nucleus at high temperatures. The problem is that once the plasma reaches a few thousand degrees, every known material will melt, so when hydrogen is anywhere near hot enough for fusion, you can’t keep it in any kind of container. 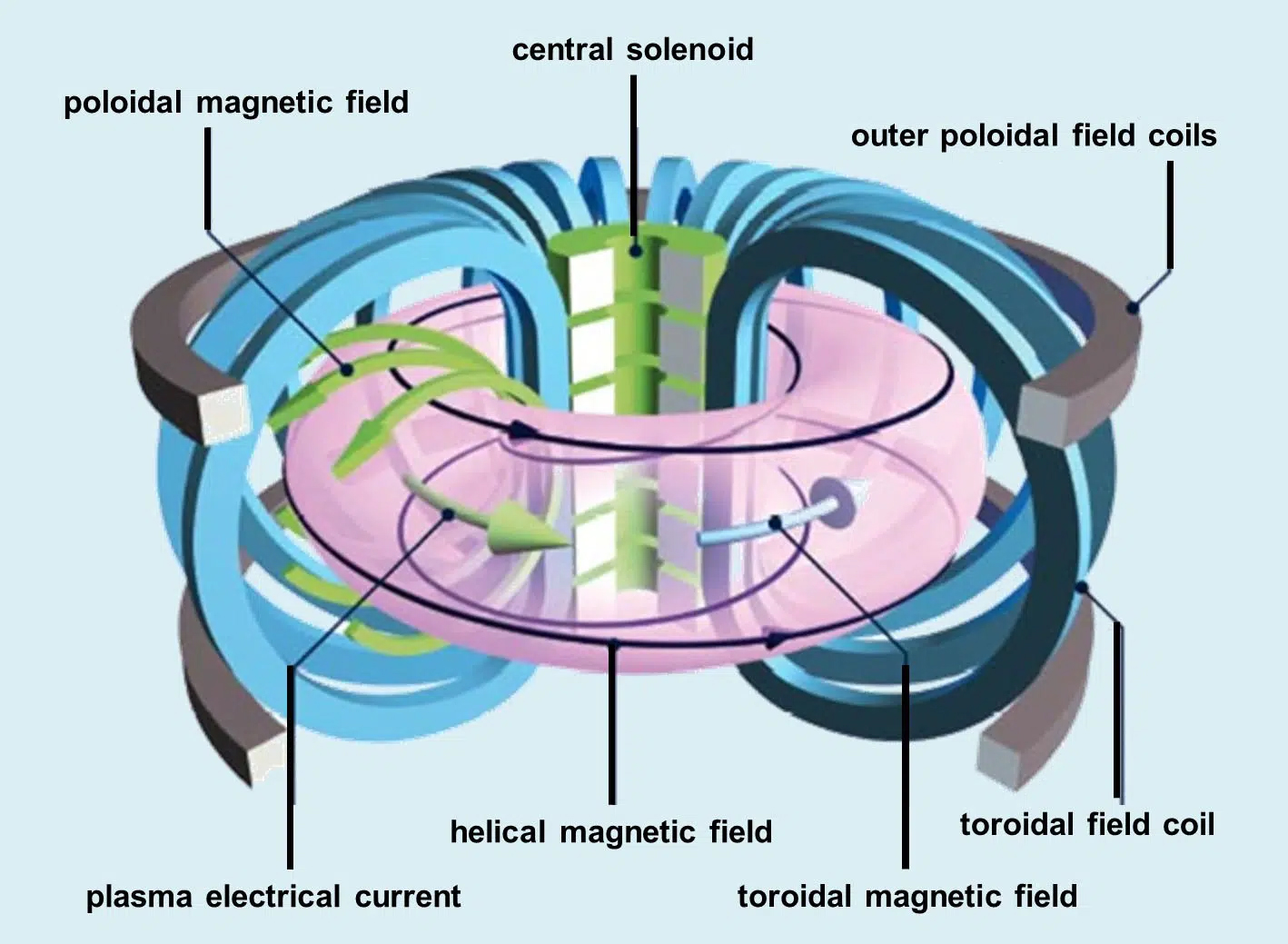 Basic tokamak components include the toroidal field coils (in blue), the central solenoid (in green), and poloidal field coils (in gray). The total magnetic field (in black) around the torus confines the path of travel of the charged plasma particles. Photo credit: Courtesy of EUROfusion via DoE

But the electricity flowing through the hydrogen is like lightning. The path taken by the electric current is constantly shifting because wherever the electricity goes, it causes a little explosion that disrupts the flow of current, which has to find a new path. Since there’s no controlling the path the electricity will take, the magnetic field has to adjust its shape a million times per second in order to hold the hydrogen together. This is an engineering challenge that has stymied the tokamak project for decades.

Strategy number two is called “inertial confinement.” The plan is to create a little pellet of solid hydrogen and zap it with lasers converging from all directions. The pellet is actually two types of “heavy” hydrogen — rare isotopes with a neutron or two added to their nuclei – held in a crystal and frozen to a few degrees above absolute zero.

Ordinarily, if you started to heat the solid hydrogen with lasers, the pellet would explode — from a rapid increase in gas pressure — before the hydrogen gets hot enough to fuse. The trick is to use lasers so powerful that the requisite heat is deposited in billionths of a second, causing the pellet to get hot enough to fuse before it has a chance to fly apart.

The lasers required are each as long as a football field, so big that it takes many billionths of a second just for light to get from one end of a laser to the other. Focussing all that energy from a couple hundred lasers on a pea-sized target at exactly the same moment is an engineering feat, to say the least. Nevertheless, the inertial confinement method has now leapfrogged ahead of the tokamak, after a much later start. 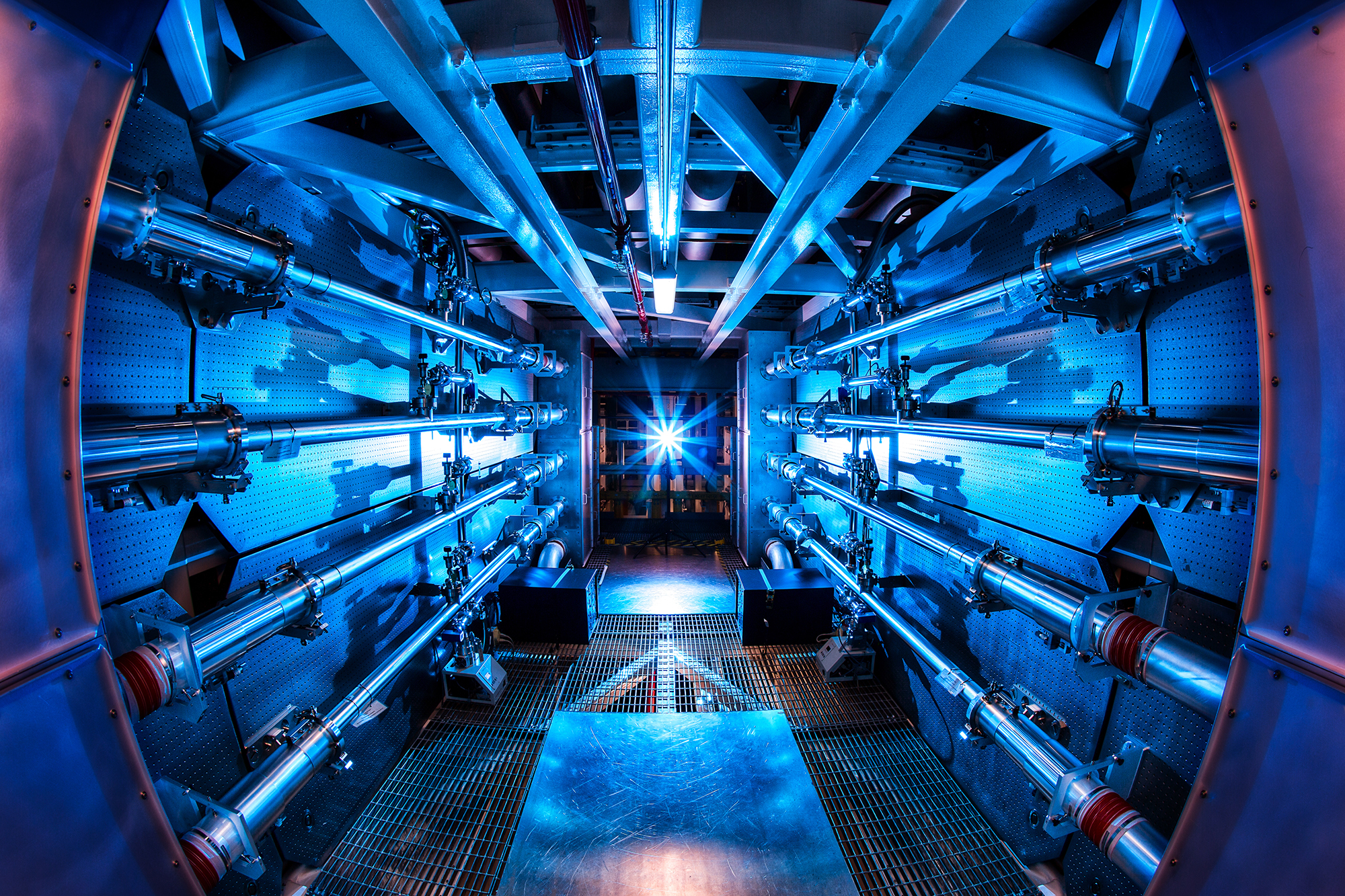 Last month, the Lawrence Livermore National Laboratory announced that they had succeeded for the first time in getting more fusion energy out of the system than the laser energy they had put in. “Breakthrough!” trumpeted the headline. Which it was.

But the announcement was based on selective bookkeeping.

The Livermore researchers counted the “energy in” from the 192 lasers they used, but they didn’t headline the fact that it took a hundred times that much electrical energy to generate those powerful and tightly focussed laser beams. They also counted all the heat produced by the fusing hydrogen as “energy out” without accounting for the fact that you would have to boil water with that heat and use steam to turn a turbine to drive an electric generator, a process that is less than 40 percent efficient overall. And they didn’t count the energy (or expense) of preparing the pellet with those special kinds of heavy hydrogen that fuse easily.

When all the energy inputs needed to achieve this fusion “breakthrough” are toted up, the process actually “cost” about a thousand times more energy than it generated.

In other words, while the Livermore process is undoubtedly impressive as a feat of engineering,  scientists will have to make the process a thousand times more efficient before it can give rise to a commercially viable power plant. The progress announced will be just sufficient to keep the research grants coming in, but I think it highly unlikely that hot fusion will become a practical energy source in the time left before something better becomes available. Does Congress have enough collective scientific understanding to judge which are the best billion-dollar bets on climate-friendly future energy technology?

Next week: Cold fusion is not vichyssoise with sushi, but it may be a suppressed technology capable of transforming our civilization.

Josh Mitteldorf’s PhD is in theoretical physics, but his current research is in the evolutionary biology of aging. His book, with Dorion Sagan, tells the surprising story of why we get old and what we can do about it. His writing is featured at ScienceBlog and his own Substack page. Check out his poetry.