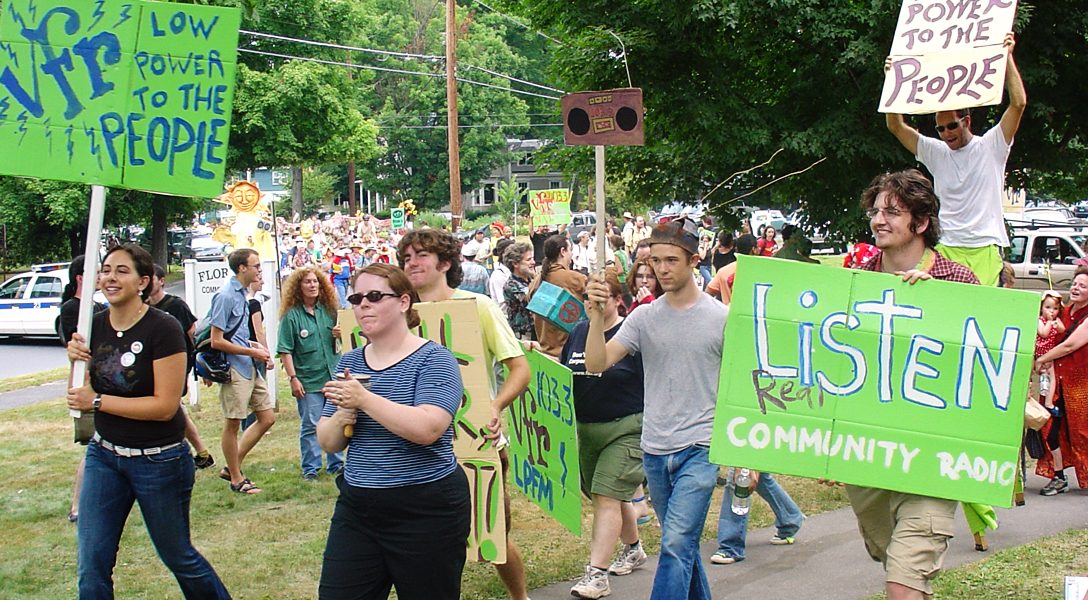 For those who support a diverse and independent media, the last few decades have not been kind.

In 1996, antitrust restrictions were relaxed on radio ownership. During the last 20 years, the FCC has cracked down on, and closed up hundreds of “pirate” radio stations. The current FCC head has left no stone unturned in repealing any remaining antitrust or local accountability regulations for commercial media.

But there has been one bright spot. The rapid growth in low power FM (LPFM) stations has taken off, despite the “dereg-mania” policy toward commercial media. It is a trend that has been decades in the making.

‘Radio for You and Me’

As far as DC protests go, an October 5, 1998, demonstration was one of the more colorful ones. Approximately 50 “radio pirates,” LPFM broadcasters without a license, first marched on the headquarters of the Federal Communications Commission, and later to the National Association of Broadcasters (NAB) — twin pillars of the communications establishment.

Many dressed in pirate garb and shouted chants of “free the airwaves” and “radio for you and me, tell it to the NAB.” They were protesting federal policies they viewed as both too generous to commercial radio owners, and unfairly blocking nonprofit, community radio stations from getting their fair share of operating licenses on the FM spectrum.

Claiming that an unholy alliance of big government (the FCC) and big business (the NAB) had effectively nixed low power FM, many of these station owners set up shop anyway and broadcast illegally.

In 1998, the FCC claimed it had shut down 250 of these so-called pirate radio stations in 10 months. It appeared these ragtag protesters were on the losing end of a political battle with powerful DC interest groups.

Flash forward 20 years. Today, not only do many of these activists have licenses to operate above-board LPFM stations, but many of those stations are thriving. What explains the difference?

Most would credit the passage of The Local Community Radio Act (LCRA) in 2011 for the turnaround in the fortunes of LPFMs.

To qualify for an LPFM radio license the applicant must be:

In January 2000, in response to grassroots pressure, the FCC established LPFM as a new designated class of radio station. But the idea of low power broadcasting dated back many decades before the FCC’s 2000 decision.

In 1948, the first “Class D” FM station licenses were issued. Class D stations were originally licensed at 10 watts on the FM band. They were strictly non-commercial and were only licensed to educational institutions.

The CPB saw these Class D stations as a waste of radio space, blocking parts of the spectrum from higher-powered, public broadcasters. The organization argued Class D stations did not serve the public interest because their programming was so variable.

The FCC agreed, phasing out the Class D license in 1978. And, still another dynamic came into play.

In 1996, the Telecommunications Act was signed into law. This law lifted antitrust restrictions for radio ownership and led to the rise of radio chains such as Clearwater Communications.

In order to bolster the bottom line, these corporate chains cut back on personnel and the coverage of local news.

Radio listeners noticed these cutbacks and complained about the “homogenization” of news, whereby local newscasts all sounded the same, with little difference in the content of broadcasts between affiliate stations.

Indeed by 2015 it was reported that six corporations owned 90 percent of all media outlets in America. This lack of FM-dial access for community radio, plus the homogenization of news broadcasts by the corporate chains, led to the rise in the broadcasts of pirate radio stations, or broadcasters without a legal radio license.

Colorful radio “pirates” flaunted their opposition to the domination of the FM dial by corporate chains. In fact, there was an explosion of pirate radio stations following passage of the 1996 Telecommunications Act. Activists formally petitioned the FCC to open up the airwaves to community radio stations.

These efforts paid off in January of 2000, when the FCC formally established the LPFM as a new designated class of radio station. But the powers that be did not roll over for this new reform.

The Empires Strike Back

Both the National Association of Broadcasters (NAB) and National Public Radio saw the opening up of the FM dial to LPFMs as a threat. Both organizations claimed the FCC’s proposal would create massive interference for existing FM stations.

The NAB put together a compact disc allegedly documenting the technical interference the LPFM’s would cause and gave a copy to every member of Congress.

The massive lobbying campaign by the NAB and NPR paid off. The Radio Preservation Act was signed into law in 2000. The act greatly reduced the potential FM dial opened up to LPFM applicants. This was done through imposing stringent requirements low power FM applicants had to meet to ensure their broadcasts would not interfere with those of existing commercial FM stations.

NPR’s lobbying was seen as crucial in corralling liberal congressional support for this legislation. It was estimated by some LPFM advocates that this law cut by two-thirds the amount of potential FM frequencies that would have been available to LPFMs.

Tucked away in the Radio Preservation Act was a provision requiring an analysis by the FCC of the risk of interference newly licensed LPFMs would actually pose to established FM stations.

That report, known as the Mitre Report, played into the hands of LPFM advocates when it was published in 2003.

The report found no significant interference risk posed by the licensing of LPFMs. It also recommended the restrictive interference requirements imposed on LPFMs by the Radio Preservation Act be waived. The grassroots activists continued to take advantage of the dissatisfaction with “homogenized” news and the lack of coverage of local concerns by corporate radio chains.

Despite the restrictions of the Radio Preservation Act, roughly 700 LPFMs got their licenses and actively broadcasted during the 2000s. The popularity of these stations with local listeners also helped to shift public opinion.

All the activism, letter-writing, and lobbying by LPFM advocates culminated in 2011 when the Local Community Radio Act was signed into law by President Obama. The law essentially reversed the restrictions placed on LPFMs by the Radio Preservation Act.

And having now been on the books for over eight years, its impact has been dramatic.

A Shot in the Arm

Before the Local Community Radio Act became law, there were over 700 LPFMs licensed and broadcasting. Eight years after its enactment, the number of LPFMs has more than doubled, jumping to over 1,400.

“[The FM dial] was dominated by commercial and religious interests and there was not any room for community voices on the dial,” Sharon Scott, co-founder and manager of ArtxFm, told WhoWhatWhy.

ArtxFM, WXOX 97.1 FM in Louisville, KY, is an LPFM station dedicated to giving a radio platform to artists in the Louisville area.

An open question about LPFMs is whether they could fill the local-news coverage gap caused by cutbacks by print journalism and corporate radio. The answer appears to be a qualified “yes.”

Scott pointed out that even though WXOX’s main focus is on the arts, that has not stopped guests from covering little-publicized news stories. A recent broadcast did an in-depth story on Kentucky’s connection to Canada on the underground railroad during the 1800s.

And, there are scattered anecdotes from around the country of LPFMs carving out a niche for themselves in covering local and neighborhood news events:

“The FCC in recent decades has been able to get away with letting large corporations take big swaths of the airspace and not really serve the public interest. The LCRA gives some of that spectrum back to the people,” Urick said.

Scott noted that WXOX has 120 volunteer DJ’s producing the shows in-house. And because local volunteers do all the work, that gives WXOX credibility with local listeners that a faraway entity would not have.

She also felt that, with all the misinformation online, it was becoming harder and harder for people to trust social media. This shows the value of local media where the programming is happening in-house by people within the community.

And she cited one other benefit.

“Low power FM stations are small, but they make a giant contribution to local community programming. This important law eliminates the unnecessary restrictions that kept these local stations off the air in cities and towns across the country,” former FCC chairman Julius Genachowsk said.

While the LCRA did help turbocharge the growth of LPFMs, with the change of administration new obstacles have arisen since 2017. Ajit Pai, Trump’s appointment to chair the FCC, has taken strong stands against regulation of the private sector, and has pursued policies seen as harmful to LPFM.

Floyd ticks off actions Pai has taken, such as eliminating the main studio rule requiring broadcast station groups to have a main studio in a given local coverage area. This is in addition to Pai’s interest in relaxing antitrust and cross-ownership rules between television and radio stations.

But an even larger threat looms for LPFMs. The FCC in the Trump years has favored awarding FM licenses to “translator” stations over LPFMs. Translator stations do not produce any original programming. They rebroadcast programs from their commercial parent companies into markets those companies cannot yet reach.

Urick found it disappointing that the FCC had stopped enforcing the LCRA and awarded the translator applicants most of the remaining FM radio channels. He expressed doubt as to whether there would be anything open in urban areas for LPFMs.

“The FCC has been more focused on giving away spectrum to corporations, in the form of translator auctions and application windows, than [to] LPFMs,” Floyd added.

Prometheus and Common Frequency both filed objections with these applications with the FCC. But the FCC denied hearing their argument on appeal because the FCC gauged neither entity to have enough standing to object to the pending translator applications.

It would appear safe to say that only with a new administration, and a new FCC not tethered to a free-market ideology, will the full potential of LPFMs have a chance of being realized. NPR’s political image has been that of a center-left, urbane, public service organization. Many were shocked when NPR teamed up with the more conservative National Association of Broadcasters to push the Radio Preservation Act in 2000.

The group quickly became Public Enemy No. 1 in the eyes of LPFM advocates.

NPR defended its actions, claiming it was supporting the bill because of their legitimate fear that more LPFMs would interfere with existing FM broadcasts.

Others were less charitable toward their motives.

“Public Radio has got their piece of the pie and they’re not interested in anybody but themselves,” said then–House Minority Whip David Bonior, Democrat from Michigan.

Others ascribed NPR’s motives to traditional political back-scratching. Robert McChesney — a prominent advocate of media reform — claimed that by teaming with the NAB on this issue, the latter group’s 20 lobbyists could be helpful when it came time to securing public funding from Congress.

Whatever NPR’s motives were in this legislative battle, there was little debate among observers on their decisive impact. LPFM advocates say that NPR’s vocal opposition has been the most effective lobbying group for enlisting the support of Democratic lawmakers for the Radio Preservation Act.

“Those who would normally support low-power FM — those who support diversity on the airwaves — believe they’re doing the right thing [by opposing low-power], said Cheryl Leanza, formerly of the Media Access Project. “In fact all they’re really doing is listening to a trade group protect their interests.”