In Sweden, Drones Are Beating Ambulances to the Scene — and Saving Lives

This story by Michaela Haas is being posted with the kind permission of the original publisher, Reasons to Be Cheerful.

In early December last year, a 71-year-old man in Sweden received an early Christmas present: a new chance at life, delivered via drone. While shoveling snow in front of his home in Trollhättan, about 75 kilometers north of Gothenburg, he suffered a cardiac arrest.

A passerby, Mustafa Ali, saw him collapse and called emergency response. After three minutes, before the first responders got to the scene, a drone arrived and hovered over the driveway.

“First, I thought, there’s somebody filming here,” Ali told Euronews, “but someone from the alarm center said, ‘Here is your defibrillator, so just pick it up.’ OK!”

The drone winched down an automated external defibrillator (AED), with clear instructions on where to attach its yellow pads to the patient’s body. The quick rescue saved the patient’s life.

Once the AED is attached to the patient, it automatically detects the patient’s heart rhythm and will only deliver shocks when it ascertains a cardiac arrest. “You don’t have to do anything as a bystander other than attach the AED,” Hallberg explained.

Sweden is the first country in the world that began to equip drones with AEDs in 2020. In the Trollhättan emergency, the first responders were there within five minutes, but the drone was there in three. What sounds like only a slight difference can mark the frontier between life and death.

Some doctors use the popular adage, “Time is brain,” because with every minute that passes after a cardiac arrest, a patient’s survival rate decreases by 10 percent, and brain functions can be damaged irreversibly. “Two hundred seventy-five thousand Europeans and about 350,000 Americans suffer a cardiac arrest every year,” Magnus Hallberg, a developer at the drone company Everdrone, said. “Only 10 percent survive.” Too often, bystanders don’t know how to perform first aid, and defibrillators are rarely at hand. 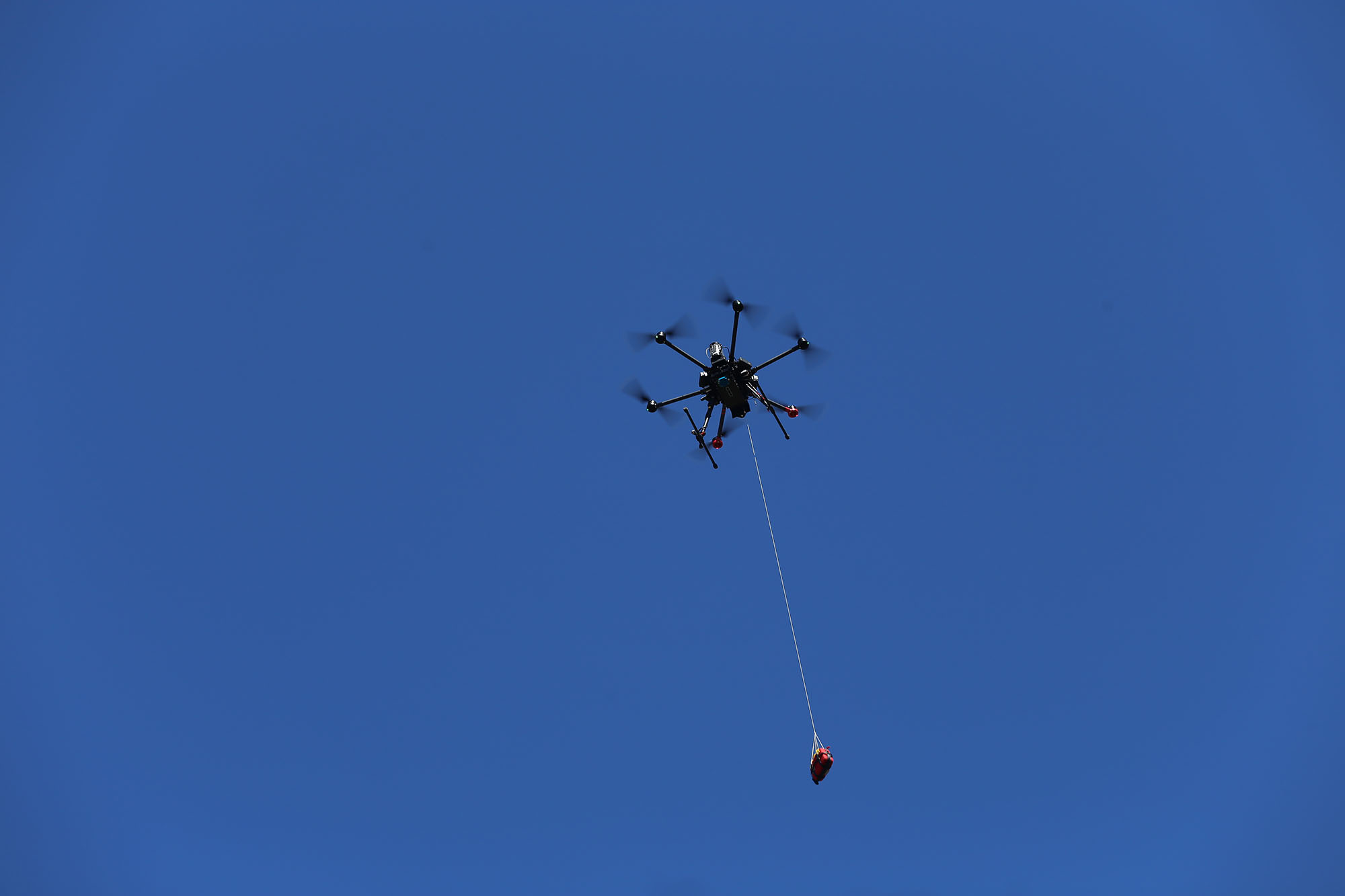 A drone winches down an AED in Sweden. Photo credit: Everdrone 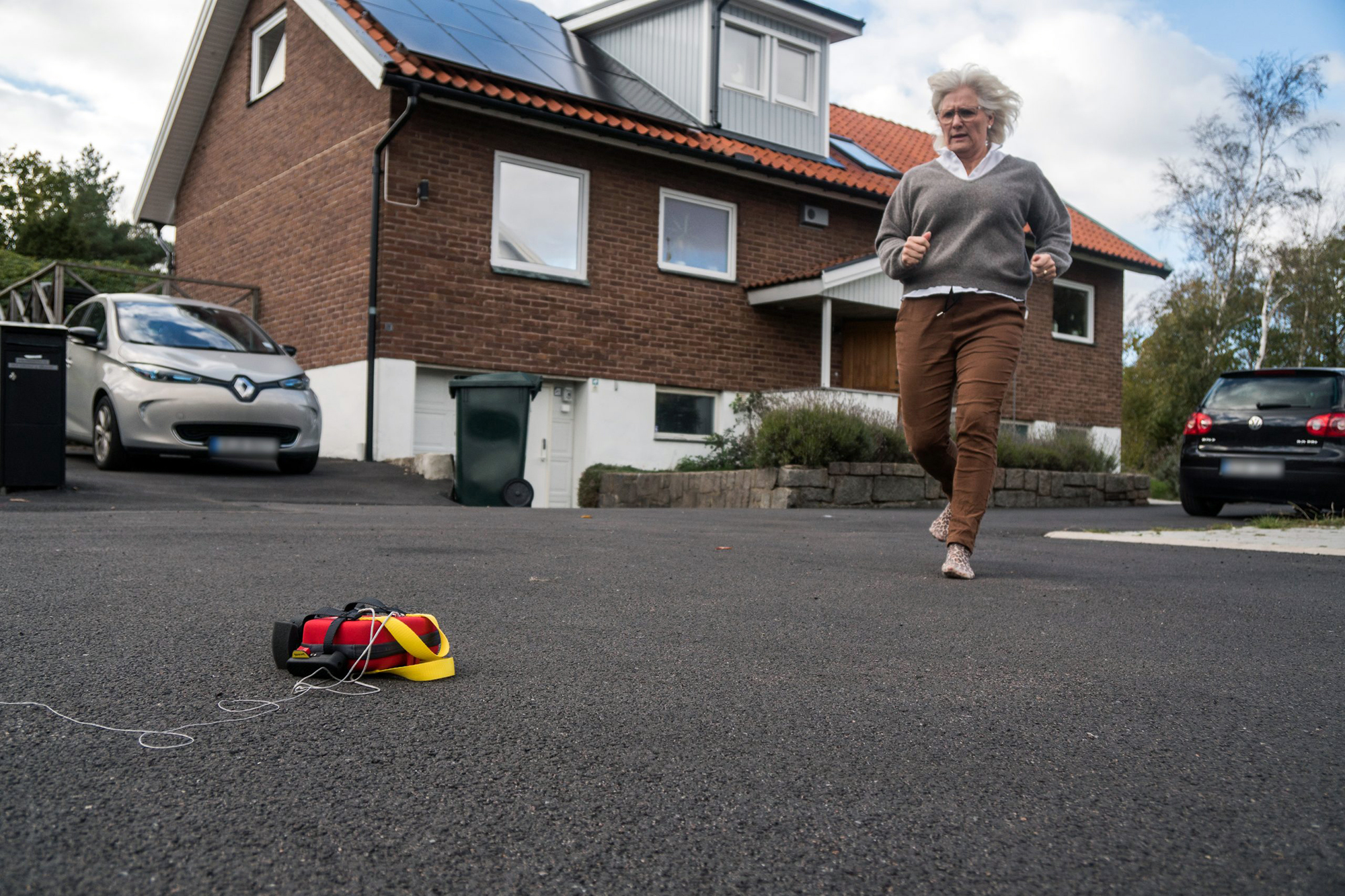 An AED is dropped on the ground for the person on the scene to retrieve and put to use. Photo credit: Everdrone

After two years, the Swedish pilot study shows that 92 percent of the drones arrive safely and quickly. Ambulances can get stuck in traffic jams that drones simply traverse as the crow flies. It helped that Ali is a medical doctor who was on his way to the hospital and did not hesitate to immediately render first aid, but even people with no medical background can hardly make a mistake.

Once the AED is attached to the patient, it automatically detects the patient’s heart rhythm and will only deliver shocks when it ascertains a cardiac arrest. “You don’t have to do anything as a bystander other than attach the AED,” Hallberg explained.

What makes the Swedish example noteworthy is that the drones get sent on their way immediately, as soon as an emergency is classified as a cardiac arrest. “The drone is airborne within 60 seconds,” Hallberg shared. “On average, it takes 10 to 11 minutes until the ambulance arrives.”

The drones are hard to beat when speed is of the essence, such as after a cardiac arrest or a snake bite, or in remote and medically underserved communities where patients face long transports to clinics and pharmacies.

Everdrone coordinates the project with the Center for Resuscitation Science at Karolinska Institutet (Sweden’s largest medical university) and the national Swedish emergency center, SOS Alarm. When the center receives a call that fits the criteria for a cardiac arrest, the operator will instruct the caller on rendering first aid, while simultaneously sending an ambulance and a drone on their way.

For the pilot project, the AED drones covered a radius of 6 kilometers with 200,000 inhabitants, but Everdrone is about to expand to more regions and other countries.

Though the drones fly autonomously, there is still a pilot in command who oversees the operation for safety reasons and to get clearance from air traffic control. “The actual operation comes down to $40 to $60 an hour,” Hallberg calculated. “That’s supportable.”

The drones are hard to beat when speed is of the essence, such as after a cardiac arrest or a snake bite, or in remote and medically underserved communities where patients face long transports to clinics and pharmacies. As a result, many are getting on board.

Google has patented a drone system for medical deliveries that includes AEDs. Backed by GV and Microsoft cofounder Paul Allen, the US company Zipline has tried out its medical deliveries on other continents, in Ghana and Rwanda for example, and is planning to extend to transport blood, antibiotics, prescription medication, and vaccines in rural areas in Maryland, Nevada, North Carolina, Utah, and the State of Washington.

The Navajo Nation in Arizona just received its first medical delivery from a different drone developer, ZappCare, to secure medication delivery in hard-to-reach areas. Mark Atlan, the founding CEO of ZappCare, is a member of the Apache Nation and put together a team of fellow Native Americans to secure medical care in hard-to-reach areas called Mission Healing Eagle Feather. “Especially during the harsh winter months, we’ll deliver pharmaceuticals and medication, such as insulin and hypertension medication, to individuals who can’t get out of their driveways or are in super rural areas,” Atlan said. “Maybe emergency kits, maybe food, maybe some water.”

The movement is growing around the globe. The German company Wingcopter recently received a $16 million order to deliver drones for medical supplies in remote areas of the US. While the Everdrone drones are specifically designed to deliver AEDs to areas that are served by participating hospitals, Wingcopter’s [drones] can travel up to 110 kilometers, at a speed of 100 kilometers per hour. They are already being used in Africa, for instance, to deliver medication and banked blood in Malawi. Wingcopter drones have also been used to deliver coronavirus vaccines and masks for COVID-19 prevention in far-flung areas, like during a UNICEF initiative on the island state Vanuatu in the South Pacific.

Drones are not new technology in public safety. Fire departments, police stations, and companies routinely use drones, for example to monitor at-risk areas in search and rescue or to check power lines. Weighing against advantages of speed, cost, and decreased emissions, though, are some substantial disadvantages. Some areas are not suitable for drones. For example, narrow alleys, crowds, or power lines can prohibit landings. (To minimize potential accidents, Everdrone’s unmanned aircraft does not land but winches down the AED.) Expensive medication or devices could get lost despite the GPS. And many drones can’t fly in strong wind or rain, though their design continues to improve.

“Speed is everything,” Timothy Amukele, a pathologist at Johns Hopkins Hospital in Baltimore, is quoted on the website Drones in HealthCare after finishing a proof-of-concept study to deliver blood samples via drone. “If it sits there for a long time, at some point the specimen starts deteriorating. It’s not so useful anymore.” 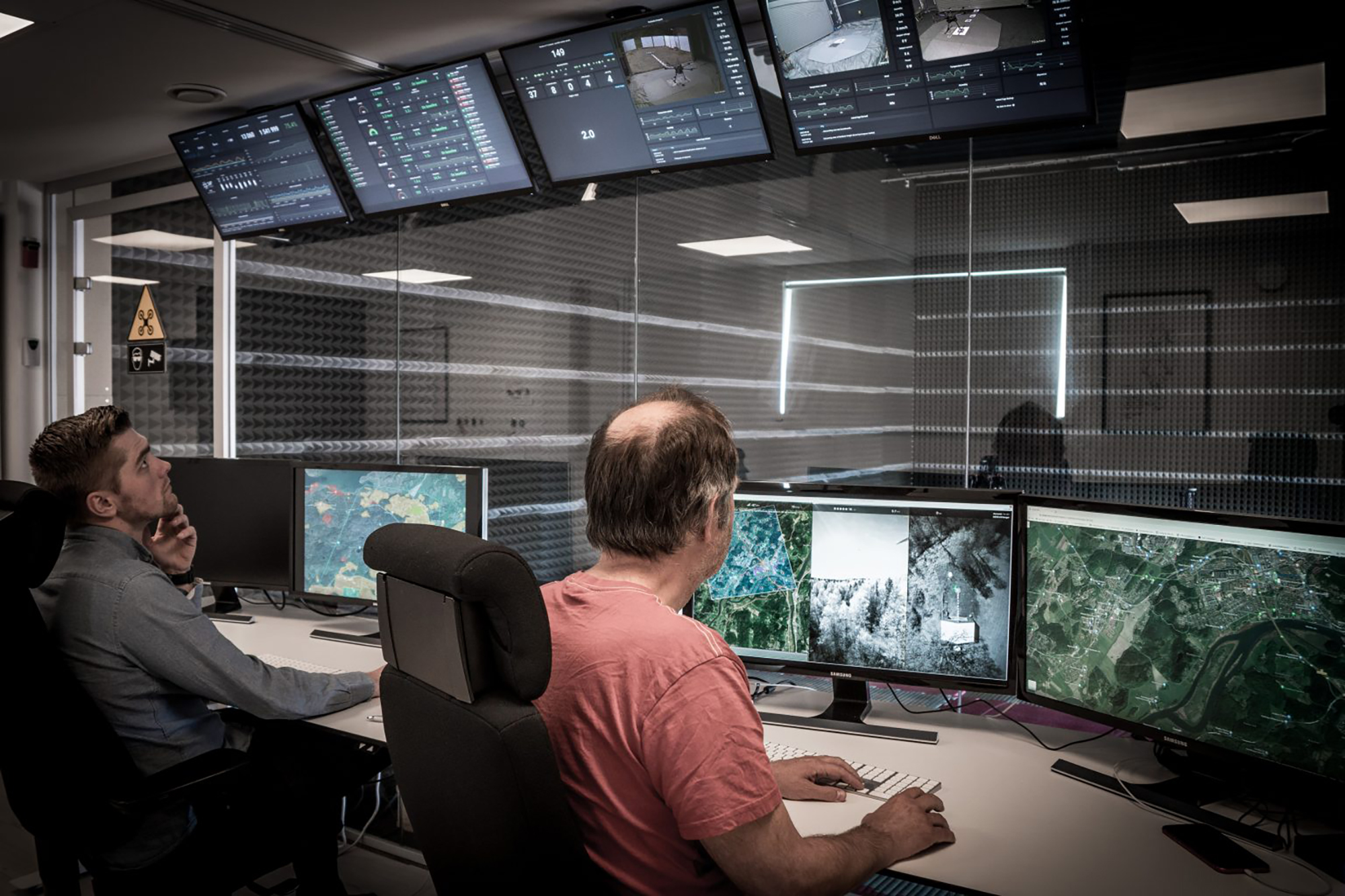 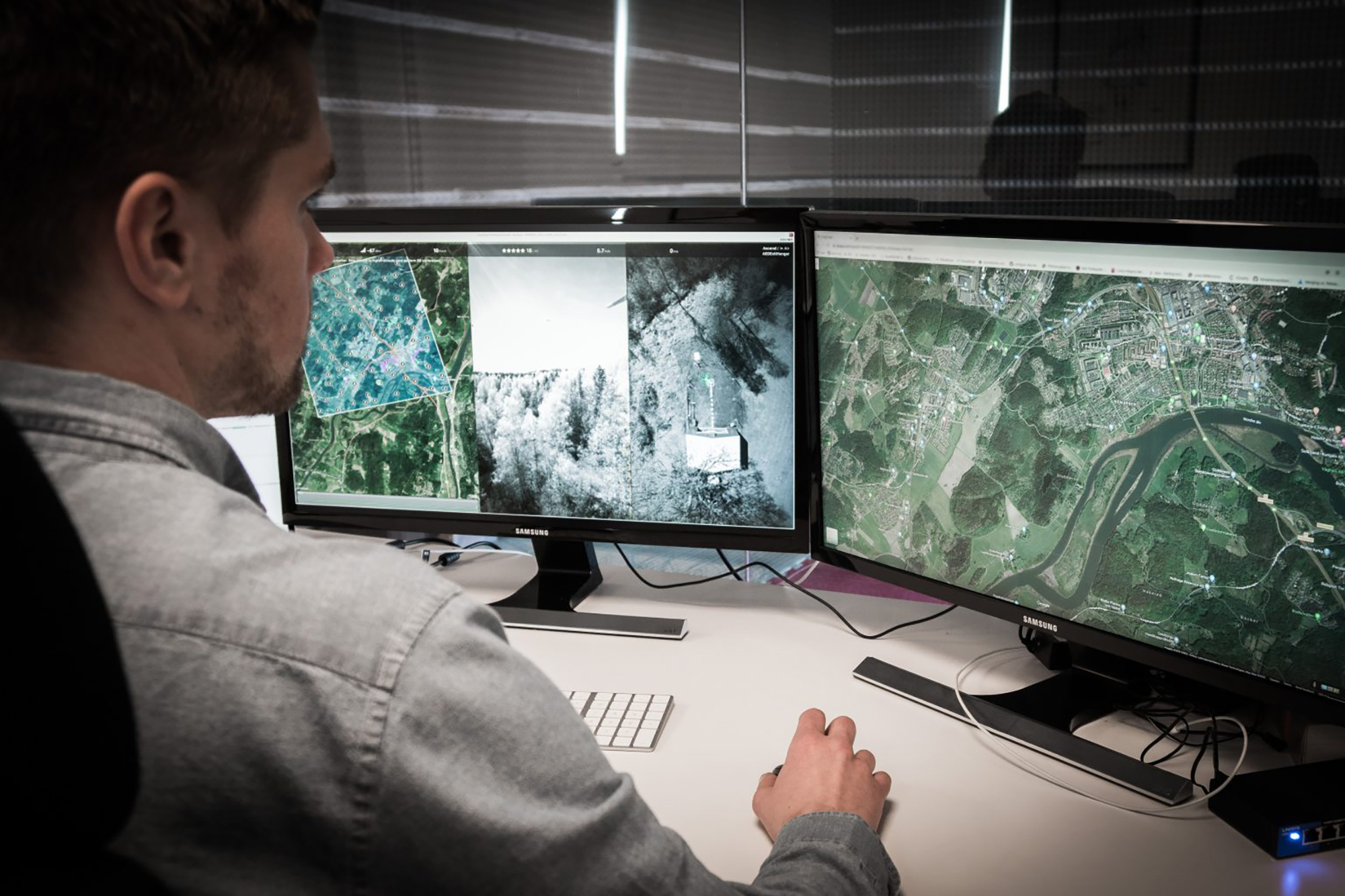 In addition, there is a reason many drone companies have been active outside the US first: The US has eased some regulations, but bureaucratic hurdles remain. For instance, drone pilots don’t need aviation pilot training anymore but, contrary to the Swedes, current drone projects in the US require visual oversight. Already, unpermitted drones regularly obstruct fire crews and helicopters in emergencies.

Yet, most experts believe that it is only a matter of time until drones will become standard in medical care. “People are starting to realize that drones can be used for good,” Amukele said. “Already, in the United States, they are being used for agriculture and filmmaking, but what they haven’t been used for is health care. Health care is the industry where we need this capacity.”