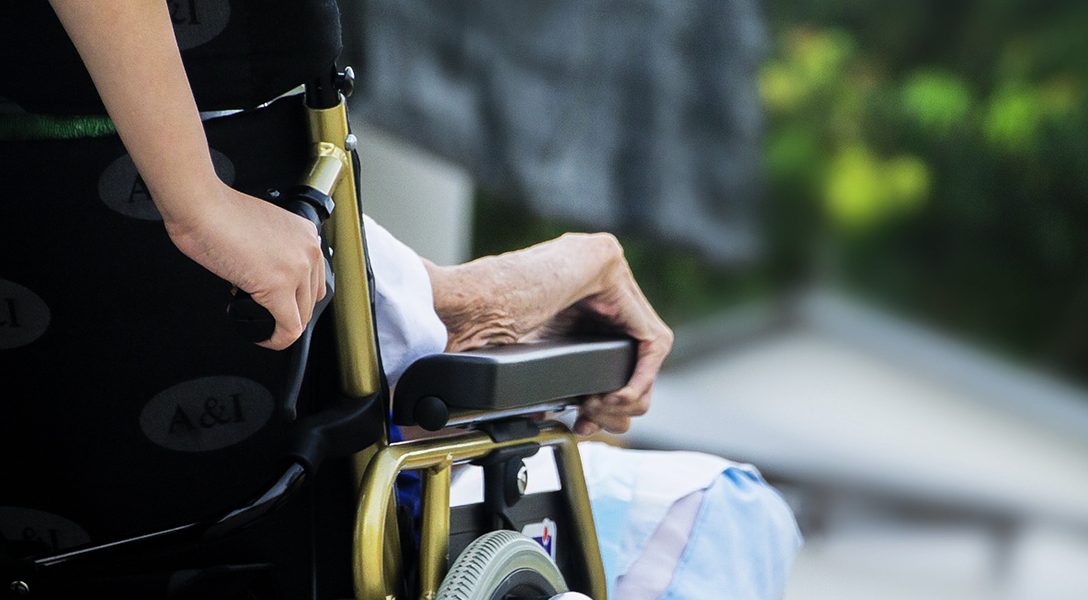 The sky-high costs of in-home care for the elderly and disabled have been a major problem for many US families. Voters in Maine will vote this fall on an ambitious Universal Home Care initiative that would make the wealthy help pay for such care. If successful, it could become a model for other states.

Under the initiative, all adults 65 years and older as well as state residents with disabilities would be provided long-term health care and social services in their home at no cost to the individual. Providers that receive funds from this program would be required to spend at least 77 percent of the funds on employee costs.

The campaign promises to be expensive and hard-fought, but there are a couple of points that both advocates and opponents of the bill agree on. One is that in Maine, a state with the highest percentage of seniors in the nation, the need for in-home care is genuine. Second, with the average costs of in-home care services in the state at $50,000 a year, versus the average yearly costs of nursing homes in Maine over $100,000 a year, in-home care is preferable where possible.

The hard facts — primarily that Medicare does not reimburse home care costs and Medicaid does so at very low rates — fuel a general consensus that the system is broken; but opposing sides of the debate appear to agree on little else.

Not only do opposing sides not agree on solutions to the problems of inadequate home care, they are nowhere near close to agreement on the root causes of the problem.

For those who followed the presidential campaign of Sen. Bernie Sanders (I-VT) two years ago, the arguments put forth by initiative advocates will sound familiar. Supporters claim that after years of receiving tax breaks at the state and federal level, the top 10 percent of Mainers pay the lowest effective tax rate of all income groups.

And advocates point out another inequity in the tax system. They claim that the $128,400 income cutoff for payroll taxes allows the wealthy to pay a smaller proportion of their income to fund Social Security than the average taxpayer. These points underpin the advocates’ proposal to right what they see as the wrongs of the tax system. By imposing a tax of 1.9 percent on wages and investment income above $128,400, they assert the measure would close unfair tax loopholes for the wealthy to fund a universal home care benefitting most Mainers.

“People making more than $128,400 a year are paying a smaller percentage than the rest of us in payroll taxes and [our proposal] makes things more fair while helping seniors stay in their homes,” Mike Tipping, communications director for the Maine People’s Alliance, told WhoWhatWhy.

The opposition approaches the tax issue from a totally different perspective. They claim that past tax increases to pay for social programs have shifted the tax burden onto the shoulders of high income earners. According to the Maine Heritage Policy Center, a 2014 state study shows the top 10 percent of households in Maine pay more than 56 percent of individual income tax. Proponents of the program point out that in-home care costs roughly half that of nursing home care. Photo credit: Ann / Flickr (CC BY 2.0)

And their view on the impact of higher taxes on Maine’s taxpayers doesn’t end there. Jacob Posik, policy analyst for the Center, contends the initiative fails to delineate between single filers and families. He claims that if a family makes more than $128,400 in adjusted gross income*, it would be subject to additional payroll taxes.

That assertion has been hotly disputed. Tipping maintains that the increased payroll tax threshold is only for individual filers, not families. He cites the initiative’s actual language, as well as an earlier claim by opponents that was fact-checked by the Press Herald and found to be false.

How voters view the tax increases may be crucial in whether the initiative passes or not.

Posik stated the tax would also harm the state’s many small businesses and ultimately cost jobs. He highlighted a study by the Maine Heritage Policy Center on the impact of Issue Two, which voters passed in 2016 and placed a 3% surtax on high income brackets to raise more funding for public schools.

The Center believes that its prediction of this smaller tax’s negative impact on business investment and job growth have largely come true. It predicts that the even higher taxes called for in the home care measure would make a bad situation even worse. Conservative groups view the repeal of the 2016 surtax contained in Issue Two by the Maine legislature, as vindication.

“Only the 1.6 percent wealthiest of Maine’s taxpayers would be affected by this threshold. The bulk of small businesses would not be paying higher tax under this plan,” Tipping said.

“If voters see the tax increases as another regressive tax for services they may not be using, then it may run into trouble,” Bates College professor John Baughman, told WhoWhatWhy.

Governor Paul LePage (R) raised several objections to the Maine home care initiative, criticizing it for raising taxes and not being workable. (You can click here to read or listen to all of his comments.)

The administrative structure set up for the program has also become a lightning rod — even at this early stage in the campaign.

Under the initiative’s language, the home care program would be administered by a “universal home trust fund board” made up of home care business owners, home care employees, and home care consumers.

Opponents have criticized the board from two different angles. They claim it would lack public accountability due to its nine privately elected board members not having to face Maine voters.

They also believe the board could violate federal Health Information Privacy (HIPAA) rules by allowing disclosure of client information. They state the initiative’s language would allow groups of agencies, personal caregivers, or clients wanting to advocate before the board access to names and contact information for individuals within constituencies to join the board and take part in board elections.

“The referendum’s requirement that the names and contact information of Maine’s elderly and disabled populations, without their permission, be shared for election purposes is in all likelihood a violation of federal medical privacy law,” attorney Kathleen Healy said.

Advocates view both of these arguments as spurious. Tipping points out that the board would be modeled after several other state boards whose members are not publicly elected or appointed by the state.

He also noted that there was language in the referendum allowing the board to put in place rules “for the confidentiality of lists.” Another key section of the initiative requires that 77 percent of the funding go towards improving wages and benefits of home health workers. For advocates of the measure, this is a no-brainer.

Proponents say that the average hourly wage rate for Maine home care workers is little above the minimum wage. This has led to high turnover, low professionalism, and long waiting lists for home care customers — due to the difficulty of finding workers to do this challenging work for such low pay.

Opponents view the 77 percent funding requirement as another reason to oppose the initiative. Because of this requirement, only a small portion of the funds would go directly to benefit elderly and disabled Maine residents, Posik claims.

Advocates counter that the funding requirement would lead to a more stable home care workforce. In addition they argue home care service consumers would also benefit, because higher wages would attract more workers to the field and cut down wait list time.

The initiative’s backers appear enthusiastic about the public response they are getting.

“There has been an amazing level of show of support. We collected 70,000 signatures. That support crosses all party and ideological lines,” Tipping told WhoWhatWhy.

Others were more guarded in their take on the initiative’s chances.

Maine did pass Medicaid expansion last year by a wide margin. And that expansion initiative carried four of the seven counties that Trump won in 2016, Baughman observed. “That signals some pent-up demand in the state,” he said.

On the other hand, Baughman noted that Medicaid was a “known” institution and popular with the voters. The universal home care initiative is unfamiliar to many voters and has many “moving parts” — such as the universal home trust fund board — that the opposition can raise doubts about.

Finally, how the public views the tax hikes proposed to fund the program will also be crucial. “Its chances are clearly better if it is not seen as a massive middle-class tax hike,” Baughman stated.

There are also differing views of the impact on other states if the initiative passes. Tipping cited public statements — by groups pushing Medicaid expansion in Idaho and other states — that Maine’s success has been an encouragement.

Baughman is more skeptical. He feels the fact that Maine’s population is the oldest in the union makes it atypical. While Medicaid expansion helps working people and the working poor regardless of age, this program — universal home care — disproportionately benefits the elderly.

“Because it is a program that would disproportionately benefit the elderly, it is something that is more attractive to Maine than it would be to many other states,” Baughman said.

He also feels that the advocacy groups in other states backing universal home care were not as organizationally developed as those pressing for Medicaid expansion.

With the costs of in-home care for Maine residents sky-high, both advocates and opponents of the measure agree there is a need for expanded home care services.

But opponents tend to favor private, or more “market-oriented” solutions. “The solution is not in creating a huge government bureaucracy, but in increasing the direct reimbursement [to home care workers],” Posik said.

Legislation that would have done just that failed to pass in Maine’s last legislative session. Tipping cites that failure as one of the reasons behind the universal home care initiative.

Another proposal favored by those on the right would allow spouses of home care consumers to be paid for providing essential care.

With the graying of America, it seems only a matter of time before politicians have to come up with a solution to the current home care crisis. Whether Maine passes this initiative may help decide whether that solution is rooted more in the public sector or more in the private sector.

The twelfth paragraph in the article reads:

That assertion has been hotly disputed. Tipping maintains that the increased payroll tax threshold is only for individual filers, not families. He cites the initiative’s actual language, as well as an earlier claim by opponents that was fact-checked by the Press Herald and found to be false.

That paragraph should have read:

That assertion has been hotly disputed. Tipping maintains that the increased payroll tax threshold is only for individual filers, not families. He cites the initiative’s actual language, as well as an earlier claim by opponents that was fact-checked by the Press Herald. They concluded the opponents’ claims about the tax applying to families were false.

Since this article was originally published, there have been new developments around the issue of how broadly the proposed payroll tax increase applies.

Recently, initiative opponents feel they have they have gotten the upper hand on this argument. Maine Revenue Services, a nonpartisan branch of state government, concluded that the payroll tax increase for the program would impact families and joint filers, not just wealthy single filers. Their public testimony may have been reflected in the finalized ballot language drawn up by the Secretary of State’s Office, also stating the increased payroll tax would apply to both single filers and families.

The argument on this point could take a long time to be decided. If the initiative passes, it may well not be resolved until the program is fully implemented.