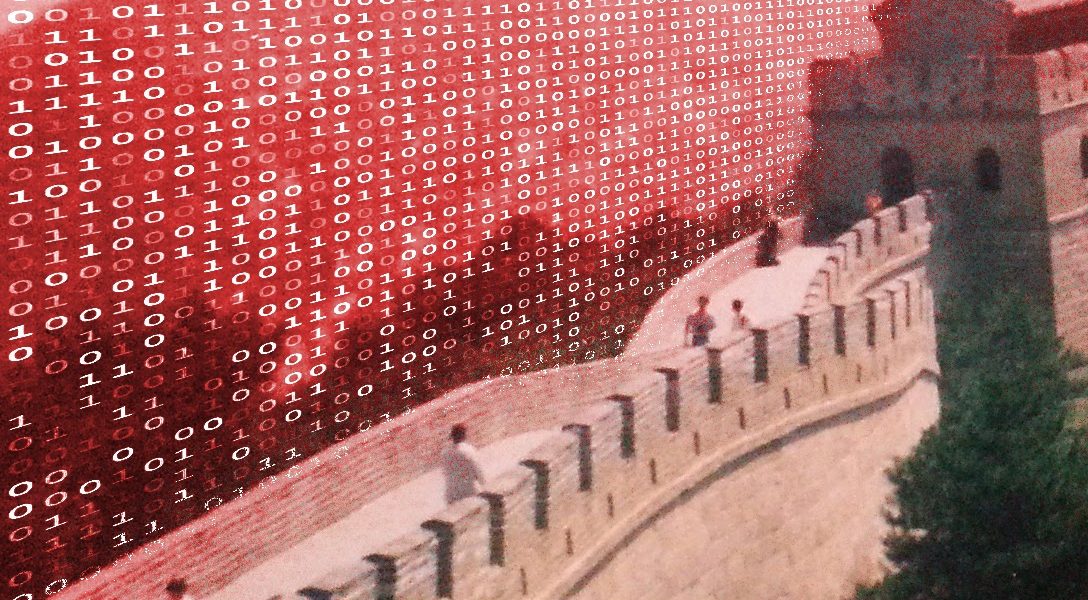 The moment that my international flight landed in Shanghai, China, I tried out a new VPN service on my cell phone. I’d heard about the app while studying abroad; the company promised it could bypass China’s “Great Firewall” to access YouTube, Netflix, and other government-blocked sites with lightning speed.

So I logged into my account, but kept getting the same message: “Unable to establish a connection to your selected server.”

The only lightning was the speed at which half my phone’s apps quit working, including Google, Facebook, Twitter, WhatsApp, Telegram, and Slack. Even worse, my dissertation files were mostly stored in Google Docs and had yet to be submitted to my university.

Clearly, I needed a more robust VPN (virtual private network), the ladder for Chinese residents to climb over wicked firewalls and leap into the uncensored internet. Most VPNs are not free — at least the ones that actually work — but many people are willing to spend $50 a year for the services. If you live in China and want to know more about touchy subjects like Hong Kong democracy or Uighur camps in Xinjiang, using a VPN to access Western search services like Google is essential. Otherwise, you are limited to selective and biased results on China’s main search engines, like Baidu. After my free VPN failed to work as advertised, I asked my friends for recommendations. I found a few solutions, which I won’t identify here — no reason to alert Chinese authorities who might try to block them.

At the airport, I waited endlessly for registration paperwork and COVID-19 tests. Finally, the bus took me to a four-star quarantine hotel, a luxurious cave, except that internet access was like a throwback to the days of dial-up phone connections. Streaming videos took forever. I couldn’t do any work or entertain myself, so I called down to the hotel’s front desk.

Without the protection of a VPN, China’s army of censors would know where I was browsing.

“My internet is so slow. Could you send someone to fix it?” I asked

“Sorry, sir. We don’t have designated WiFi for every customer. Our WiFi is public,” the clerk responded.

“Sir, you didn’t browse foreign websites, did you?”

I froze for a second or two, and said, “Ah, no. No. I just went through domestic websites.”

Actually, I was lying. I was trying to finalize my postgraduate dissertation project on Google Docs, and I checked out media sites like the New York Times and the Guardian every day, though it took ages to load pages. Without the protection of a VPN, China’s army of censors would know where I was browsing if they wanted to look. (Note to residents of other countries: So does your own internet provider.)

AIl quarantine hotels are authorized by the government, and newly arrived travelers from overseas destinations are an appealing target. It’s like living in a cell with a 24/7 Big Brother watching you, a real-life 1984. They know what you saw, what you wrote, and what you sent. This story that I am typing now is a risky proposition.

China’s Great Firewall is probably the world’s most sophisticated censorship system. It turned the Chinese internet into a self-fulfilling zone, feeding users with information filtered by the government. The virtual wall was launched in 1998, four years after China accessed the World Wide Web. It undermines transparency and the free flow of information. It helps local tech companies grow by catering to domestic users. It constructs China’s cyber sovereignty and keeps evolving. The number of blocked sites keeps growing, and China tries to restrict or eliminate VPNs. Baidu is bad news for anyone in China asking about VPNs. Photo credit: Baidu

Since the Great Firewall could be watching, I use workarounds when asking about VPNs on social media. “Do you have good Wei Pien (the Chinese pronunciation of VPN)?” is a phrase I often use.

The coronavirus gave Chinese authorities another excuse to ramp up surveillance. For instance, the government can use tracing technology to quickly identify people who have visited risky regions, then test them for COVID-19. It’s likely the Chinese government will continue those efforts after the pandemic subsides.

The primary risk is my WeChat account, which I’ve been using since 2014.

After the initial coronavirus outbreak (or at least after authorities admitted that it existed), every Chinese citizen was assigned a health code on WeChat, China’s widely used social network. To enter public places — supermarkets, offices, restaurants, railroad stations, etc. — I must verify my ID to activate my health code and show it to security staff.

But where will my personal data go after the pandemic? Will it be stored by tech companies like Tencent, or will the Chinese government keep tracking my location? Will contact tracing protect me, or be used as a weapon against me? I have no answers to those questions. But I am sure my internet footprints have been watched, and will be watched.

The primary risk is my WeChat account, which I’ve been using since 2014 when I was about to start my freshman year of college. Like millions of high school graduates, I left behind teen-style QQ, a popular social network in China, and switched to the more grown-up WeChat, which is (supposedly) more private and has a friendlier interface.

WeChat started as a messaging app, but has since evolved into a whole ecosystem. With WeChat, I can subscribe to (authorized) media channels and customize my news feed. With its links to my credit card and bank account, I can order food delivery and shop online, or activate a QR code to pay my bills. The app is an infrastructure essential to modern living for hundreds of millions of Chinese.

WeChat liberated me from bringing mountains of cash to supermarkets. Most importantly, I met a bunch of amazing guys through the app. But starting in 2016, censorship on WeChat began ramping up. Enormous numbers of posts criticizing China’s declining free speech were removed from the platform. When that happened, I would click on a URL and usually find a blank page saying “404 not found.” Some accounts were eternally banned: A user would log on and find a notice that “our platform has checked the account and decided to ban it due to its violation of relevant laws and regulations.”

For those who’re already applauding China’s COVID-19 responses, CN is still heavily censoring info. A magazine’s feature on a whistleblower is being taken down from the entire CN internet. Ppl have to turn article into EMOJI to avoid censorship. Chinese readers can u decode it? pic.twitter.com/4p4vgXJ3I5

I was shocked by the heavy-handed intervention, and so were my friends at college. WeChat isn’t a luxury — it’s a necessity.

One journalism student I knew kept switching accounts to advocate free speech and LGBT+ rights after being consistently banned. I still remember one of his comments. “I knew a ban on my account would definitely happen,” he said. “But I can’t pretend the world is fine.”

People started trying other workarounds to defeat censorship. Instead of posting links to forbidden materials, for example, users would take a screenshot of a news story and share it as an image in posts or group chats. Then the algorithm got smarter, so people turned the screenshots upside down, or converted text into PDF files. One friend sent me a PDF file of a BBC report about labor rights conflicts in southern China, and named the document “Long live the socialism.”

WeChat users realize they could be setting time bombs on their accounts if they spread censored materials, but many are willing to take the risk. Thousands acted to preserve and share a feature story about Ai Fen, a doctor in Wuhan who criticized the government’s suppression of early warnings about COVID-19. The article was immediately censored on WeChat, but Chinese netizens encoded the article in many creative ways. They translated the article into various languages, emojis, and even morse code.

Despite such occasional outbursts, many people are terrified. We don’t mention “President Xi Jinping” on WeChat because it could lead to a permanent ban on our accounts. We don’t know why, but one theory is that censors were annoyed by some memes saying Xi looks like Winnie the Pooh. So, my friends and I often refer to Xi as “that person,” or “President Xi” in English.

I haven’t been actively involved in online campaigns against censorship. I sometimes share screenshots — like accounts from student activists or media reports probing the red line of censorship — and that’s it. I’m not brave enough to confront a sophisticated surveillance machine. When pro-democracy protests mushroomed in Hong Kong last year, I posted relevant reports in WeChat and was soon blocked. The articles became only visible to me. When I tried to send the articles to my friends, they said they couldn’t see the links, so I knew my messages were blocked as well. The block was just a warning. If I take a step forward, my account might be banned forever. I would lose my contacts and access to essential daily services.

A friend’s younger brother got a ban on his WeChat account for commenting on national security laws in a group chat. “I sympathized with him,” my friend said. “I don’t know what is going to happen to their generation.”

China’s Cyberspace Administration has required tech giants to routinely collect user data and hand it over when requested — no bargaining allowed. I saw a notice on WeChat recently that said I must upload a photo of my ID card if I want to buy financial products. I haven’t uploaded it — yet.

Censorship during the pandemic prompted an online campaign called #FreeFromWeChat. The organizer called for Chinese netizens to “leave WeChat, go to Telegram, let’s meet in a place free from surveillance.”

My friends and I sometimes turn to Telegram, a messaging app with better encryption, to talk about sensitive topics, but it isn’t a complete alternative. Telegram is still unavailable in China without a VPN. And you can’t move everyone to Telegram because most people are not tech-savvy.

My parents’ generation tends to believe the government will use their data to protect them from the virus. But what if the data was exploited in a way they don’t know? Millions of people don’t know how to access a VPN — and for my parents, both Chinese Communist Party members, it is probably perilous to use a VPN. But do they deserve a life under surveillance? I can’t see any fairness in that.

What distressed me most about WeChat was the grassroots surveillance that always jumped on me even before official censorship stepped in. There were always people — actually, high school classmates — suddenly denouncing me as a traitor with biased views against China. I usually deleted my posts after seeing toxic comments, because I feared they would be genuinely reported somewhere. I have no agency to defend me if I land in real trouble.

So I’m sharing my concerns and fears by writing this story, using a pseudonym as my byline (Shu Xi is a Chinese nickname for “uncle”) in a language that many Chinese don’t understand. I hope my words will empower people to fight back against this invisible cage. The pandemic is destined to unfold a new normal, in China and many other places, but no one desires a normal of being watched at all times.