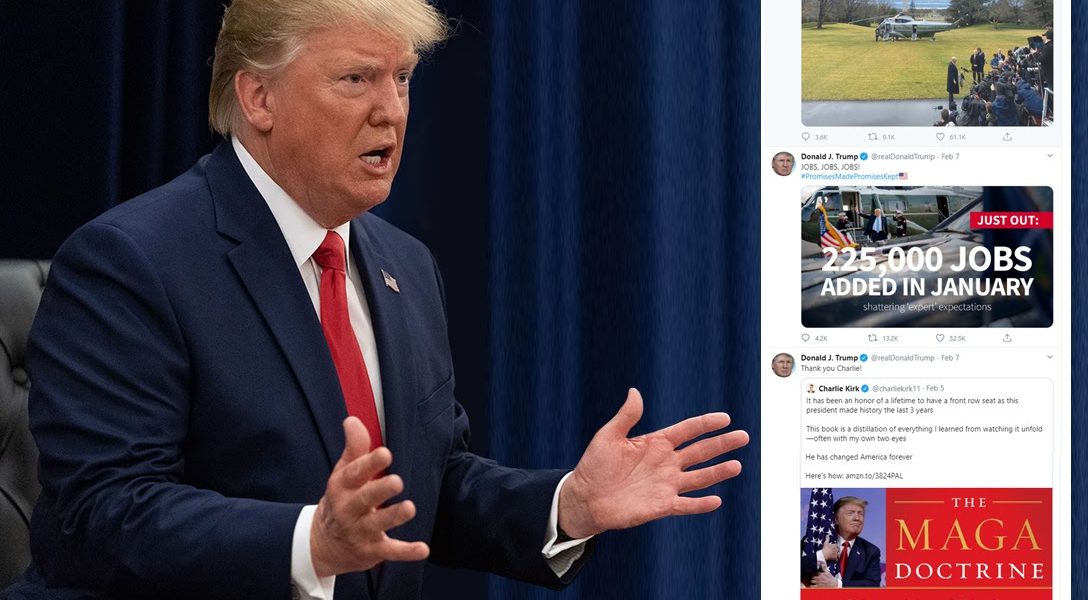 Donald Trump has nearly 80 million Twitter followers, and the social media platform is one of his primary ways of communicating to the American people. As COVID-19 began to spread, how did President Trump use this platform to communicate with the public? WhoWhatWhy analyzed the tweets generated by the president between February 1 and April 13, as the pandemic moved from its initial stages to a full-blown crisis claiming tens of thousands of lives.

The New York Times reports that Trump was told on January 29 of a memo from Peter Navarro warning that the coronavirus could cause half a million deaths and lead to trillions of dollars in economic losses. On January 30, Health and Human Services Secretary Alex Azar reportedly told Trump that the nation was facing a potential pandemic. By February 1, the president should have been fully aware of the gravity of the situation. Our analysis therefore begins on that date. The numbers show that the president devoted considerably more attention to attacking his opponents than he did to addressing the unfolding crisis. “Dem” — as in “Democrat” and “Democratic” — appeared 240 times.

It should be noted that tweets can appear in more than one category. Of Trump’s COVID-related tweets, for example, 24 also contained references to his Democratic opponents. Others attacked “fake news” or other topics. One tweet, for example, read:

Low Ratings Fake News MSDNC (Comcast) & @CNN are doing everything possible to make the Caronavirus look as bad as possible, including panicking markets, if possible. Likewise their incompetent Do Nothing Democrat comrades are all talk, no action. USA in great shape! @CDCgov….. Other words that appeared in the president’s Twitter stream include “sleepy,” “crazy,” “corrupt,” “radical,” “left,” “stupid,” and “disgust.”

Even when he did address the crisis on Twitter, the president’s rhetoric often appeared to clash with events as the pandemic progressed: Whether you share the president’s priorities or oppose them, this analysis offers a clearer look at his use of this massive platform and what that may say about his governance as the crisis unfolded.