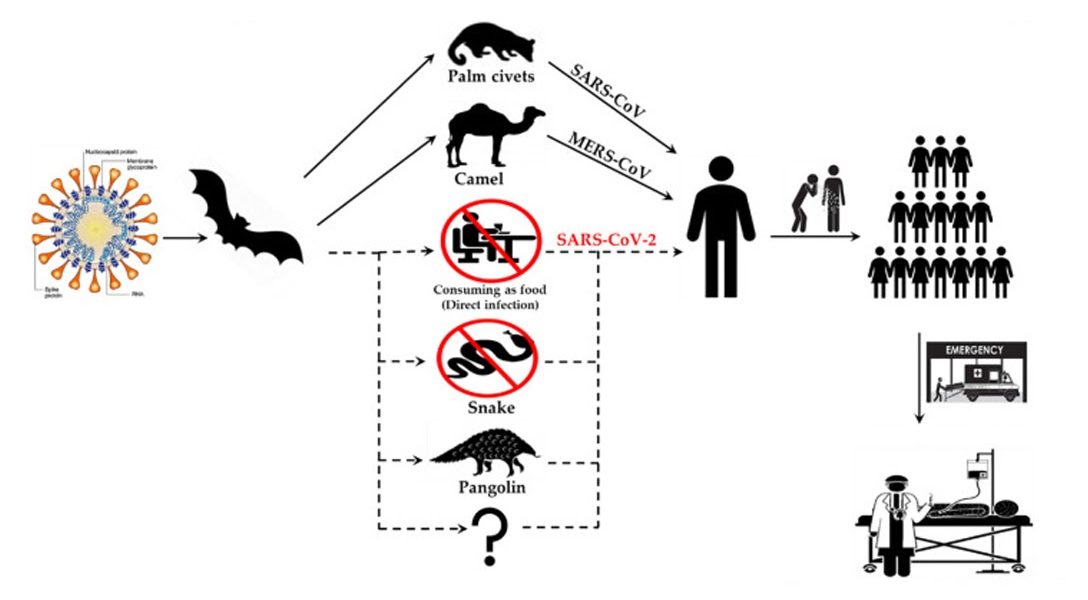 The key reservoir and potential interspecies transmission routes of SARS-CoV, MERS-CoV, and SARS-CoV-2. The ingestion of an infected animal as a source of food is the major cause of animal to human transmission of the virus and due to close contact with an infected person, the virus is further transmitted to healthy persons. However, there are no documented cases of direct bat-human transmission. The solid black arrows represent the confirmed transfer while the broken lines denote unknown intermediate hosts and suspected transmission. Photo credit: Elsevier / NIH
Health & Medicine

This Week in Pandemic: Where Did SARS-CoV-2 Come From?

The year 2020 was the Year of the Rat, and the horoscope was really quite prescient: “Your luck this year will be full of ups and downs, so be cautious in everything and be prepared for the baptism of trials and hardships. In terms of personal health, you will be prone to illness so may need to be more careful and take extra special care of yourself.”

Last year, just days before the January 25 Lunar New Year celebrations, Wuhan, China, was locked down because of a rising number of worrisome pneumonia outbreaks that were quickly found to be the result of infection from a new strain of coronavirus.

In response to reports of the emerging disease, and four days after the first case was reported in the US, Sen. Lamar Alexander (R-TN) convened a coronavirus briefing on Capitol Hill. Lawrence Wright reports that the group of senators in attendance came away reassured by National Institute of Allergy and Infectious Diseases (NIAID) Director Anthony Fauci and Centers for Disease Control and Prevention (CDC) Director Robert Redfield that “we are prepared for this.” It is doubtful the briefing included an acknowledgment of the ominous horoscope envisioned for the Year of the Rat.

At Fudan University, Shanghai, researcher Yong-Zhen Zhang and colleagues determined the preliminary genetic sequence for the newly discovered SARS-CoV-2 virus, and on January 10, 2020, they posted it on Virological.org, a pre-publication forum. The world owes a debt of gratitude to this team for publicly sharing this sequence; without it, the first COVID-19 vaccines could not have been developed at “warp speed.” While it’s true that someone else would have eventually posted the SARS-CoV-2 genetic sequence, the pandemic death rates remind us that time is of the essence.

If there is anything to be learned from the pandemic, it is that sharing scientific knowledge with respect and transparency is essential.

At the beginning,  China may have made mistakes communicating the seriousness of the outbreak, but according to a CNN report, leaked documents show that “in the early stages of the pandemic, China faced the same problems of accounting, testing, and diagnosis that still haunt many Western democracies even now — issues compounded by Hubei encountering an entirely new virus.”

A fundamental question underlying the pandemic and its management remains: Where did this new virus originate?

The idea of zoonotic transfer between a nonhuman carrier and humans in the Huanan Seafood Market in Wuhan has been the preeminent explanation for the origin of the SARS-CoV-2 virus because a variety of live mammalian species were sold there at the time of the outbreak.

But this “natural origin” theory has been countered with conspiracy theories put forward by Trump advisers as well as a Hong Kong researcher.

According to the New York Times (first published Apr 11 and then updated Oct 2, 2020), Trump’s deputy national security adviser, Matthew Pottinger, “initially suspected that President Xi Jinping’s government was keeping a dark secret: that the virus may have originated in one of the laboratories in Wuhan studying deadly pathogens. In his view, it might have even been a deadly accident unleashed on an unsuspecting Chinese population.”

Li-Meng Yan, a virologist, suspected foul play and claimed to have evidence that SARS-CoV-2 was created by Chinese scientists to use as a biological weapon. Her claims caught the attention of Tucker Carlson, who interviewed her on Fox News. The interview, which was watched by 8.8 million viewers, was debunked by Facebook, Instagram, Twitter, and even Tucker Carlson himself.

To date, scientific review (see sidebar) does not support man-made construction or genetic modification of SARS-CoV-2, and US intelligence agencies concur. Social media and mainstream news outlets don’t have the expertise to judge the validity of contrasting theories for the virus’s origin.

Politicization of the pandemic has only added to our ensuing misery because it has stifled international efforts to manage and mitigate the spread of the disease. It’s also prompted China to push back with its own conspiracy theories about SARS-CoV-2’s origin. International infighting and political motivations have certainly been factors contributing to failed international efforts for visiting and working with China to search for potential sources of the virus and to track the course of the outbreak — information that is essential for understanding how to monitor and predict this and future pandemics.

In spite of the hurdles, a team has been assembled to begin an investigation of the origin of the virus. The team arrived in China on January 14. Under the supervision of the World Health Organization and the Chinese government, they will gather evidence about where SARS-CoV-2 originated and how it was first transmitted to humans.

The questions the team will try to answer include: Are bats the original source of SARS-CoV-2? Did they transfer the virus directly to humans? Or — as is currently considered more likely — did bats transfer it to an intermediate host that then passed it on to humans? If the latter, what was the intermediate host?

As we move forward with vaccinations and other future-thinking solutions, we continue to look back at origins in order to build a clearer, truer picture of what really happened during the Year of the Rat and beyond. Conspiracies and magical thinking won’t cut it.