This Week in Pandemic: Masks, Mandates, and Multiple Realities

With the CDC’s recent change in masking guidelines and its director, Rochelle Walensky,

making rounds on networks talking about the deadliness of the Delta variant, states around the US have taken to updating or reinstating their mask mandates. Arkansas Gov. Asa Hutchinson (R), for example, is attempting to reverse a law he signed months ago against mask mandates in schools.

“In hindsight, I wish that it had not become law. But it is the law, and the only chance we have is either to amend it or for the courts to say that it has an unconstitutional foundation,” he said at a press conference.

In California, teachers are required to get vaccinated or to comply with regular COVID-19 testing. Oregon is one of the latest states to reimpose a mask mandate. While most states are following CDC guidance, some, like Florida, continue to disregard it. Gov. Ron DeSantis (R) banned mask mandates; defying the ban, Palm Beach officials instated an indoor mask mandate for all residents.

In the US and around the world, the pandemic has boiled down to a tale of two realities: one for the vaccinated and the other for the unvaccinated. The following countries are a randomly selected sample that showcase the stark difference in how the pandemic is ravaging some countries, while others have it under control.

Pakistan began door-to-door vaccinations on July 25 after the National Command and Operation Center (NCOC) “set a target of vaccinating 40% of the population over 18 years of age in Lahore, Faisalabad, Gujranwala, and Multan, and 70% of the Rawalpindi population by Aug. 14,” according to Geo News. Currently, 18.4 percent of Pakistan’s population is vaccinated. Pakistan reached its target of vaccinating one million people a day on August 3, well before its August 31 deadline of requiring vaccination certificates from staff entering public places like offices, schools, and transportation. 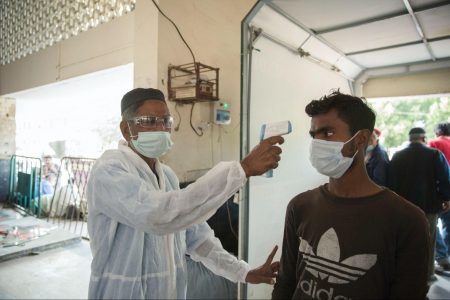 A gridlock between the Roman Catholic Church and the state has bred confusion. As Ireland began easing COVID-19 restrictions from its third lockdown by allowing indoor dining, five Catholic bishops instructed local parishes to hold communion and confirmation services this month despite a state order not to. After Ireland announced these services could restart in the fall, Catholic Archbishop of Dublin Dermot Farrell advised bishops to wait to resume these services until September.

It’s cause for concern when the state hospital goes on strike during a pandemic, especially with Nigeria’s 189,715 positive cases and 2,298 deaths to date. The National Association of Resident Doctors (NARD), which called for the strike, represents more than 90 percent of doctors in Nigeria’s teaching hospitals. The union cited unpaid salaries (some doctors haven’t been paid in 19 months) and a lack of insurance benefits for doctors’ families as two of their grievances. 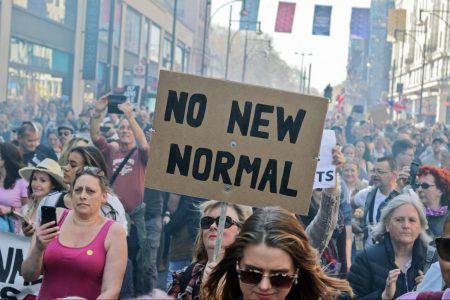 The UK adopted green, amber, and red lists for travel on May 7. As of August 27, its green list has expanded to include: Austria, Australia, Bulgaria, Croatia, Germany, Malta, Norway, Romania, Slovakia, Slovenia, and others. Some countries, such as Switzerland, Denmark, and Canada, are slated to be moved from the amber to green list on Monday, August 30. Residents of those countries can travel to the UK without isolation. It also moved more countries from red to amber, meaning fully vaccinated travelers from India, Bahrain, Qatar, and the United Arab Emirates are welcome to stay without quarantining. Britain itself has also been easing COVID-19 restrictions, with nightclubs even making a return to “normal life,” albeit to low turnout.

In true New Yorker fashion, the state held a party in Central Park. “We Love NYC:

Despite new mandates and data, however, some folks in the US feel they can’t be too safe.

Columnist, political cartoonist, and WhoWhatWhy contributor Ted Rall, who said in a Wall Street Journal op-ed he has “lung disease: asthma, swine flu, pneumonia six times, bronchitis more times than I know,” was fully vaccinated six months ago. But just to be safe, Rall received a third dose. “Germany said it will offer third shots to the elderly and sick starting next month, and White House officials told reporters they will soon advise Americans who are over 65 or immunocompromised to get them. I’m 57. Given my respiratory history, why shouldn’t I get one too?” Rall wrote. The CDC agrees with him, recommending an additional dose to immunocompromised people.

Of course, in many places a vaccination comes with incentives — $100 or a trip to the Statue of Liberty, for example, while Indianans are rewarded with a box of Thin Mints. In East Baton Rouge, LA, the state with the highest daily reported cases of COVID-19 per capita, Judge Fred Crifasi of the 19th Judicial District Court offers vaccination as an alternative to community service hours. It remains to be seen how many people will choose the vaccine over picking up garbage on the interstate. Meanwhile, the COVID-19 situation in Louisiana continues to worsen as COVID-19 wards expand while hospitals run out of room for new patients.