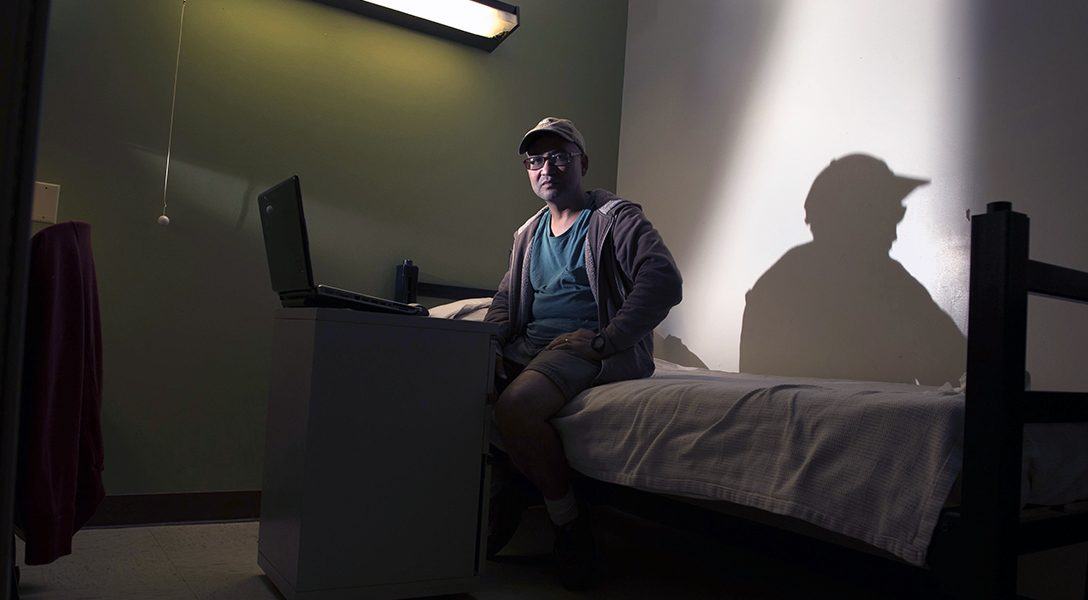 Depending on its successes and failures, the Department of Veterans Affairs (VA) is used by both parties as an example that “their” way is right. When things are going well, Democrats point to it as a successful healthcare program run by the government. When things are going poorly, Republicans claim the VA shows Washington bureaucrats mismanaging taxpayer money.

Still, unless embroiled in scandal, the VA is generally not one of those government programs that are in the spotlight of US politics. That could change, however, if President Donald Trump decides to privatize the healthcare veterans receive.

Recently ousted Secretary of Veterans Affairs David Shulkin believes that is precisely why he was fired.

“They saw me as an obstacle to privatization who had to be removed,” he said. “That is because I am convinced that privatization is a political issue aimed at rewarding select people and companies with profits, even if it undermines care for veterans.”

This is not the first time the VA has been the center of controversy. But Shulkin is arguing that the entire mission of the agency is now being called into question.

In 2014, the VA became embroiled in scandal. CNN reported that at least 40 veterans died while waiting for care at VA facilities in and around Phoenix, AZ. Internal investigations found that management manipulated records to falsely give the impression that the agency had met its goal of granting appointments to patients within 14 days of their request. The FBI opened a criminal investigation and President Barack Obama ordered a White House investigation. This scandal undoubtedly gave momentum to those advocating the outsourcing of many of the VA’s services to private medical vendors.

Legislation has been introduced in both houses of Congress to vastly expand the conditions for which veterans can use private health vendors. Trump has endorsed increasing the outsourcing of VA services. And his recent firing of VA Secretary David Shulkin was seen by many as retaliation for Shulkin’s opposition to accelerated privatization of services. An internal watchdog’s finding that Shulkin used taxpayer money for his wife’s airfare during travel with him on an official trip to Europe last year did not help his standing either.

“It’s a victory for guys who don’t care about veterans. David Shulkin was an impediment to these people’s plans, to their agenda to privatize the VA”, said Rick Weldman, executive director of the Vietnam Veterans of America. The ripple effects of vastly expanded privatization of the second largest government agency may go well beyond the nine million veterans it serves. It could have a decisive impact on other ambitious, health-related legislation and the direction of the healthcare debate in the nation as a whole.

Will Single-Payer Be Collateral Damage of VA Privatization?

And the growing support for single-payer is not limited to incumbent House Democrats. A new report found that of the 561 Democratic candidates running for the House of Representatives in 2018, 271 of them support Medicare for all or single-payer, a 48 percent rate of support. It also extends to the state level. Single-payer legislation actually passed the California State Senate last year only to be blocked in the California Assembly. Things may change if the Democratic candidate for governor, and front-runner in the polls, Gavin Newsom, is elected this year. He has come out strongly in favor of single-payer.

And he is not alone among gubernatorial candidates running nationwide this year.

Ben Jealous, considered a serious contender in the governor’s race in Maryland, supports single-payer. Three candidates running for Massachusetts governor as Democrats also support this reform. Two candidates on the Democratic side in the Minnesota governor’s race have endorsed Medicare for all. Cathy Glasson, running for governor of Iowa, has made single-payer the centerpiece of her campaign.

But it would be politically tone deaf to think that the widespread privatization of the VA wouldn’t have some adverse impact on the recent momentum in favor of single-payer.

The VA’s health system has been called “single-payer for veterans.” And for good reason.

The system not only uses public dollars to pay for medical services, but it performs these services at its own public facilities, not private ones. It’s been compared to Great Britain’s National Health Service.

But conservatives disagree. “It is hard to argue in favor of single-payer system when the existing single-payer systems — be they the VA, Medicare, and Medicaid — all have so many problems,” Michael Tanner, senior fellow with the Cato institute, told WhoWhatWhy. Suzanne Gordon, journalist and healthcare expert, noted that privatization advocates are using the VA experience to argue against not only a single-payer system, but also government intrusion into the healthcare market.

Citing the problems at the VA helped undermine efforts to pass healthcare reforms during the Clinton administration. “To see the future of health care in America for you and your children under the Clinton plan, just visit any Veteran Administration hospital. You’ll see filthy conditions, shortages of everything, and treatment bordering on barbarism,” wrote conservative activist Jarret B. Wolfstein in 1994.

There does not appear to be a lot of difference in the anti-government message against government healthcare proposals be it the Clinton plan in the early 1990’s, Obamacare in 2009, single-payer plans, or even a recent effort led by Sen. Elizabeth Warren (D-MA) to impose more rules on health insurance companies.

“The whole effort [of privatization] is to discredit government, to discredit public solutions to public problems. This is just another tactic in their arsenal discrediting the notion that government can function in the public good,” Gordon said.

Much of the debate between supporters and opponents of outsourcing at the VA may sound very familiar. They echo the debate on the proper role of government in regulating healthcare that has been taking place for decades. Not only do both sides of this debate not agree on the solution to the VA’s service problems, they are miles apart on the extent of the problem.

“Some of the VA’s problems were smaller than they appeared but were radically amplified in the press,” Gordon argued. For example, the VA’s Office of Inspector General, she claimed, determined there were only six veterans who died while they were waiting for care. And, the OIG asserted they could not prove they died because they were waiting for care. Tyrone Taylor, like many other South Florida Veterans, has a full time job and works Monday – Friday. For him, having access to VA healthcare on Saturdays can mean the difference in making an appointment or having to put off seeing a doctor for another week or even month. Photo credit: Veterans Health / Flickr

The waiting time for care at VA facilities has declined and in many cases is better than their private sector counterparts, Gordon added.

But not so according to critics.

In March of this year, the VA’s OIG reported that VA hospitals in the Midwest were inaccurately reporting wait times. Many veterans were still waiting more than 30 days for care.

Insourcing vs. Outsourcing (A Tale of Two VAs)

Gordon felt the VA has been getting a bum rap. She pointed out that all health systems have problems. She cited a 2016 RAND Corporation study that concluded the VA’s healthcare system was equal to or better than that of the private sector.

In a tally of different measures covering a variety of types of care, including safety and effectiveness of treatment, the quality of VA healthcare exceeded that of non-VA healthcare.

“The treatment may be excellent but if you have to get on long waiting lists to get care, that will be a problem for you. Patients are consumers. The choice should be theirs,” Tanner said.

Tanner believed that the private sector tended to respond very quickly to changes in direction because customers demand it. “Government is notoriously inflexible … and often responds to political priorities, not their customers”. Gordon lauded the current VA as a coordinated, integrated system with the best healthcare technology in the country. With over 35,000 unfilled positions in that agency, she felt money would be better spent on filling those positions and shoring up the system — insourcing if you will.

“They are not responding to the needs of consumers, they are responding to political priorities. Everyone wants a new VA hospital built in their district, regardless of need. That means that some districts that have the need will not be treated as well,” Tanner said.

Gordon raised doubts whether the private healthcare system could properly service the often unique needs of veterans. She cited another RAND study, this one from 2018. An in-depth survey of New York state private sector health providers found that they are not ready to take care of veterans. The report concluded that few private sector physicians, hospitals, mental health, and other professionals have the knowledge, skills, and experience to provide the level of care needed.

“Are you [the private healthcare provider] ready to take care of a veteran if he is part of the small subset of veterans who is violent and takes out a gun?” Gordon queried.

Tanner did not see things that way. He felt that much of the care that the VA provides is fairly routine and not combat-related, nor unique to the needs of veterans as opposed to the general population.

“I think that general healthcare could be provided outside of the VA health services, allowing the VA to concentrate on its core strengths like trauma care and rehabilitation,” Tanner asserted.

The political left is raising the alarm that the current drive to privatize the VA is part of a broader effort by those on the right to privatize as many government services as possible. The famous quote by Grover Norquist about shrinking government down so you can drown it in a bathtub comes to mind. In an article that came out in March of 2017, People’s Action Blog claimed the Congressional GOP wanted to privatize Medicare, the Postal Service, National Parks, and air traffic control.

The research group In The Public Interest came out with a report more than a year ago that also claimed the VA was not the only government agency that was in the privatizer’s cross hairs. They compiled a list of 32 members of Trump’s transition team or formal nominees for top agencies that had demonstrated close ties to pro-privatization groups or demonstrated support for contracting out government services.

Sen. Bernie Sanders (I-VT) recently shared his views that the VA privatization battle was not happening in a vacuum. He said the Koch brothers are openly advocating for privatizing various government agencies, including the Social Security Administration and the Postal Service.