‘My Body, My Choice’: How Vaccine Foes Co-opted the Abortion Rallying Cry

LOS ANGELES — In the shadow of L.A.’s art deco City Hall, musicians jammed onstage, kids got their faces painted, and families picnicked on lawn chairs. Amid the festivity, people waved flags, sported T-shirts, and sold buttons — all emblazoned with a familiar slogan: “My Body, My Choice.”

This wasn’t an abortion rights rally. It wasn’t a protest against the recent US Supreme Court ruling that gutted Roe v. Wade. It was the “Defeat the Mandates Rally,” a jubilant gathering of anti-vaccine activists in April to protest the few remaining COVID-19 guidelines, such as mask mandates on mass transit and vaccination requirements for health care workers.

Similar scenes have played out across the country during the pandemic. Armed with the language of the abortion rights movement, anti-vaccine forces have converged with right-leaning causes to protest COVID-19 precautions.

And they’re succeeding. Vaccine opponents have appropriated “My Body, My Choice,” a slogan that has been inextricably linked to reproductive rights for nearly half a century, to fight mask and vaccine mandates across the country — including in California, where lawmakers had vowed to adopt the toughest vaccine requirements in the US.

As the anti-vaccine contingent has notched successes, the abortion rights movement has taken hit after hit, culminating in the June 24 Supreme Court decision that ended the federal constitutional right to abortion. The ruling leaves it up to states to decide, and up to 26 states are expected to ban or severely limit abortion in the coming months.

Now that anti-vaccination groups have laid claim to “My Body, My Choice,” abortion rights groups are distancing themselves from it — marking a stunning annexation of political messaging.

Framing the decision to vaccinate as a singularly personal one also obscures its public health consequences, Ikemoto said, because vaccines are used to protect not just one person but a community of people by stopping the spread of a disease to those who can’t protect themselves.

Celinda Lake, a Democratic strategist and pollster based in Washington, DC, said “My Body, My Choice” is no longer polling well with Democrats because they associate it with anti-vaccination sentiment.

“What’s really unique about this is that you don’t usually see one side’s base adopting the message of the other side’s base — and succeeding,” she said. “That’s what makes this so fascinating.” 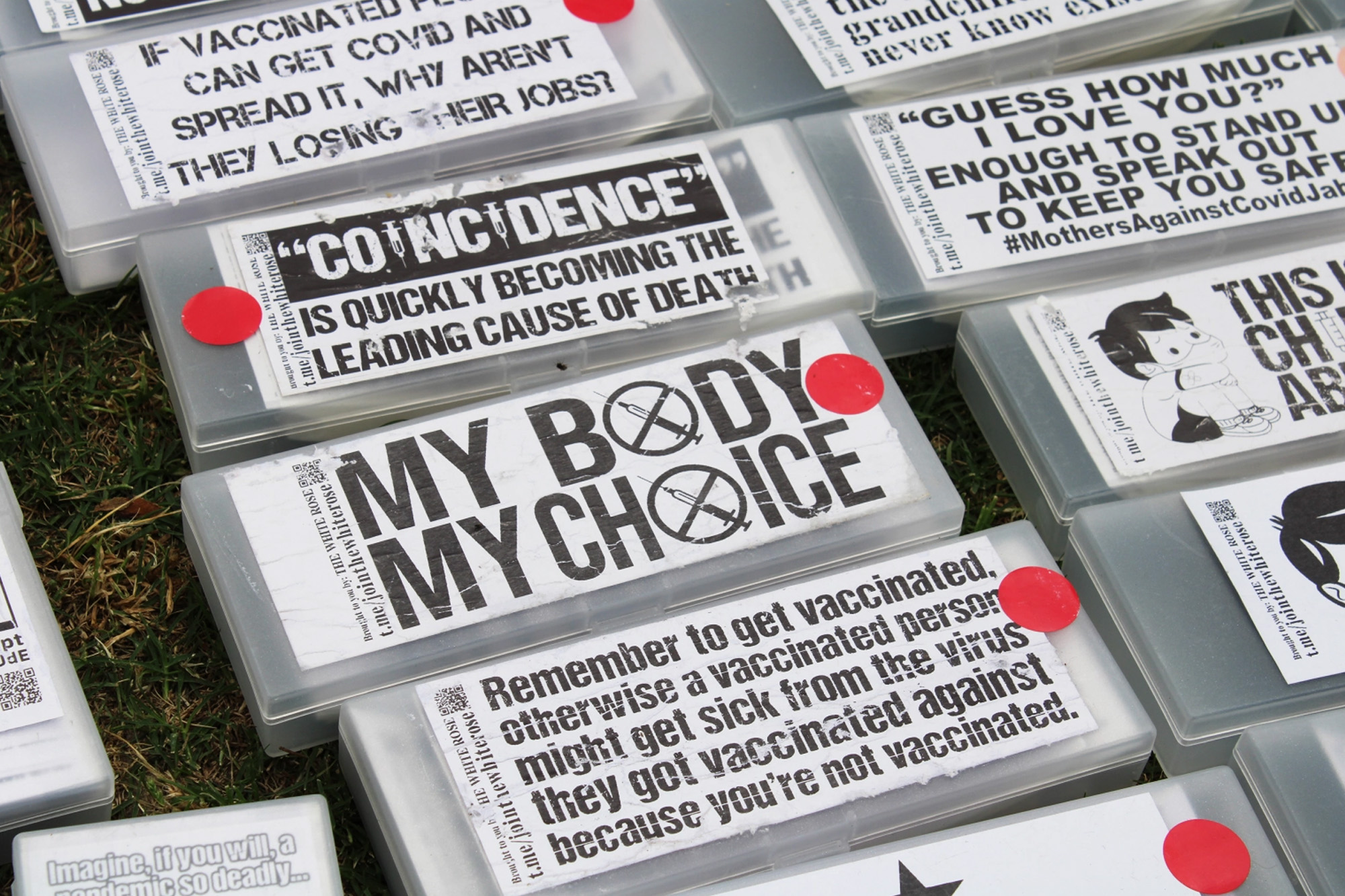 The phrase “My Body, My Choice” was ubiquitous at an April rally against vaccine mandates in Los Angeles. The slogan started as an abortion rights catchphrase but has become a favorite of vaccine skeptics. Photo credit: Rachel Bluth / KHN

Jodi Hicks, president of Planned Parenthood Affiliates of California, acknowledged that the appropriation of abortion rights terminology has worked against the reproductive rights movement. “In this moment, to co-opt that messaging and distract from the work that we’re doing, and using it to spread misinformation, is frustrating and it’s disappointing,” Hicks said.

She said the movement was already gravitating away from the phrase. Even where abortion is legal, she said, some women can’t “choose” to get one because of financial or other barriers. The movement is now focusing more heavily on access to health care, using catchphrases such as “Bans Off Our Bodies” and “Say Abortion,” Hicks said.

Vaccination hasn’t always been this political, said Jennifer Reich, a sociology professor at the University of Colorado-Denver, who has written a book about why parents refuse vaccines for their kids. Opposition to vaccines grew in the 1980s among parents concerned about school vaccine requirements. Those parents said they didn’t have enough information about vaccines’ potential harmful effects, but it wasn’t partisan at the time, Reich said.

The issue exploded onto the political scene after a measles outbreak tied to Disneyland sickened at least 140 people in 2014 and 2015. When California lawmakers moved to prohibit parents from claiming personal belief exemptions for required childhood vaccines, opponents organized around the idea of “medical choice” and “medical freedom.” Those opponents spanned the political spectrum, Reich said.

Then came COVID-19. The Trump administration politicized the pandemic from the outset, starting with masks and stay-at-home orders. Republican leaders and white evangelicals implemented that strategy on the ground, Reich said, arguing against vaccine mandates when COVID-19 vaccines were still only theoretical — scaring people with rhetoric about the loss of personal choice and images of vaccine passports.

They gained traction despite an obvious inconsistency, she said: Often, the same people who oppose vaccine requirements — arguing that it’s a matter of choice — are against abortion rights.

“What’s really changed is that in the last two or so years, it’s become highly partisan,” Reich said.

Joshua Coleman leads V is for Vaccine, a group that opposes vaccine mandates. He said he deploys the phrase strategically depending on what state he’s working in.

“In a state or a city that is more pro-life, they’re not going to connect with that messaging, they don’t believe in full bodily autonomy,” Coleman said.

But in places like California, he takes his “My Body, My Choice” rhetoric where he thinks it will be effective, like the annual Women’s March, where he says he can sometimes get feminists to consider his perspective.

Perception of the word “choice” has changed over time, said Alyssa Wulf, a cognitive linguist based in Oakland, CA. The word now evokes an image of an isolated decision that doesn’t affect the broader community, she said. It can frame an abortion seeker as self-centered, and a vaccine rejector as an individual making a personal health choice, Wulf said.

Beyond linguistics, anti-vaccination activists are playing politics, intentionally trolling the abortion rights groups by using their words against them, Wulf said. “I really believe there’s a little bit of an ‘eff you’ in that,” Wulf said. “We’re going to take your phrase.”

Tom Blodget, a retired Spanish-language instructor from Chico, CA, sported a “My Body, My Choice” shirt — complete with an image of a cartoon syringe — at the Defeat the Mandates Rally in Los Angeles. It was “an ironic thing,” he said, meant to expose what he sees as the hypocrisy of Democrats who support both abortion and vaccine mandates. Blodget said he is “pro-life” and believes that COVID-19 vaccines are not immunizations but a form of gene therapy, which is not true.

For Blodget, and many other anti-vaccination activists, there is no inconsistency in this position. Abortion is not a personal health decision akin to getting a shot, they say: It is simply murder.

“Women say they can have an abortion because it’s their body,” Blodget said. “If that’s a valid thing for a lot of people, why should I have to take an injection of some concoction?” 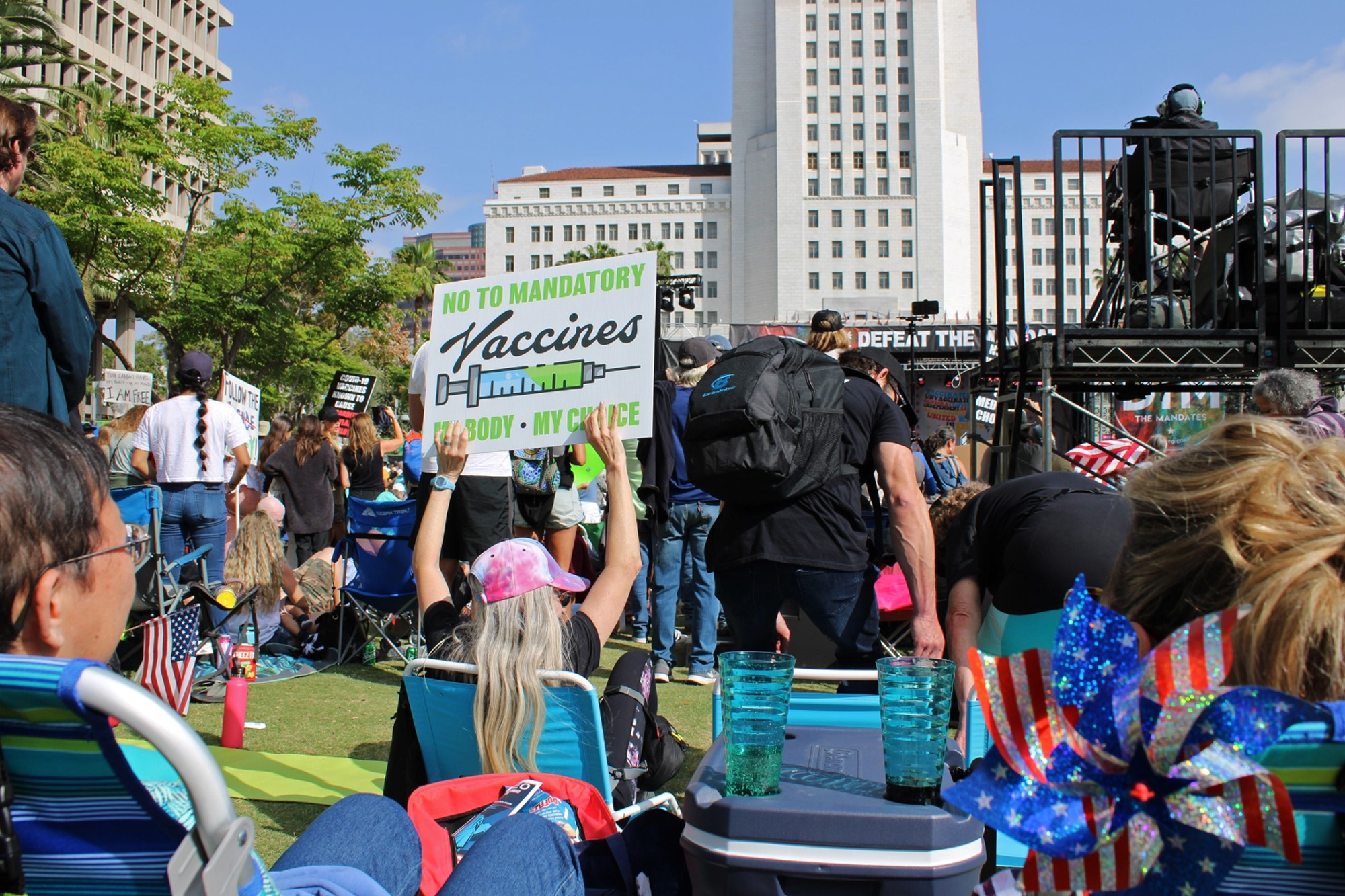 The COVID-19 pandemic and the Trump administration’s response to it further politicized a long-running debate over vaccines. The people who oppose vaccine requirements often argue that vaccination is a matter of choice. Photo credit: Rachel Bluth / KHN

About a week later and nearly 400 miles to the north in Sacramento, state lawmakers heard testimony on bills about abortion and COVID-19 vaccines. Two protests, one against abortion and one against vaccine mandates, converged. Truckers from the “People’s Convoy,” a group that opposes COVID-19 mandates that had been touring the country with its message of “medical freedom,” testified against a bill that would stop police from investigating miscarriages as murders. Anti-abortion activists lined up to oppose a bill that would update reporting requirements to the state’s vaccine registry.

“My Body, My Choice” was ubiquitous: Kids petting police horses in front of the Capitol wore T-shirts with the slogan, and truckers watching a sword dance toted signs above their heads.

At the time, two tough legislative proposals to mandate COVID-19 vaccines for schoolchildren and most workers had already been shelved without a vote. One controversial vaccination proposal remained: a bill to allow children 12 and older to get COVID-19 vaccines without parental consent.

Lawmakers have since watered down the measure, raising the minimum age to 15, and it awaits crucial votes. They have shifted their attention to the latest political earthquake: abortion.

KHN (Kaiser Health News) is a national newsroom that produces in-depth journalism about health issues. Together with Policy Analysis and Polling, KHN is one of the three major operating programs at KFF (Kaiser Family Foundation). KFF is an endowed nonprofit organization providing information on health issues to the nation.