One county out of six in the US is rated as a mental health “desert.” Photo credit: Adapted by WhoWhatWhy from habib kaki / Flickr
Apprentice Stories Health & Medicine

Native American communities have significantly higher rates of suicide, overdoses, and alcohol poisoning than the general population. For health care providers in these communities, mental health care poses a unique set of challenges. And this has only been exacerbated by COVID-19.

One of the major drivers? The inability to engage in spiritual and communal practices during the pandemic. In collaboration with the Indigenous Wellness Research Institute, a team of researchers found that those who couldn’t practice reported high levels of depression, anxiety, and suicidal ideation. One of those researchers was Stephanie Fryberg, professor of psychology at the University of Michigan and member of the Tulalip Tribe.

“The loss of those cultural spiritual activities had tremendous adverse effects on the reports we received from individuals and how they were doing,” she said.

Within these communities, mental health is thought of as being closely intertwined with spiritual practices.

“As a psychologist, I think spirituality grounds you,” Fryberg said. “It connects you both to your ancestral land, to your ancestors, and to your people who are here now, your family, your community.”

But funding for care has historically been limited, said Myra Parker, associate professor in the department of psychiatry at the University of Washington School of Medicine and member of the Mandan and Hidatsa tribes.

Parker said that Congress has severely underfunded the Indian Health Service, an agency within the US Department of Health and Human Services, for decades. Through treaties with the US government, IHS provides medical care to 2.2 million American Indians and Alaska Natives who belong to 574 recognized tribes. The federal system consists of 26 hospitals, 59 health centers, and 32 health stations operated by IHS.

In 2021, part of the American Rescue Plan included $31.2 billion in dedicated funding for Tribal governments and Native programs. Within this, $6.6 billion was allocated for health systems and $420 million marked for mental and behavioral health, but this was insufficient.

“Congress could only manage to fund IHS at $6.6 billion — literally not enough to cover inflation and population growth; so, a net loss to Indian health,” National Indian Health Board Chairman, William Smith, said in a statement. 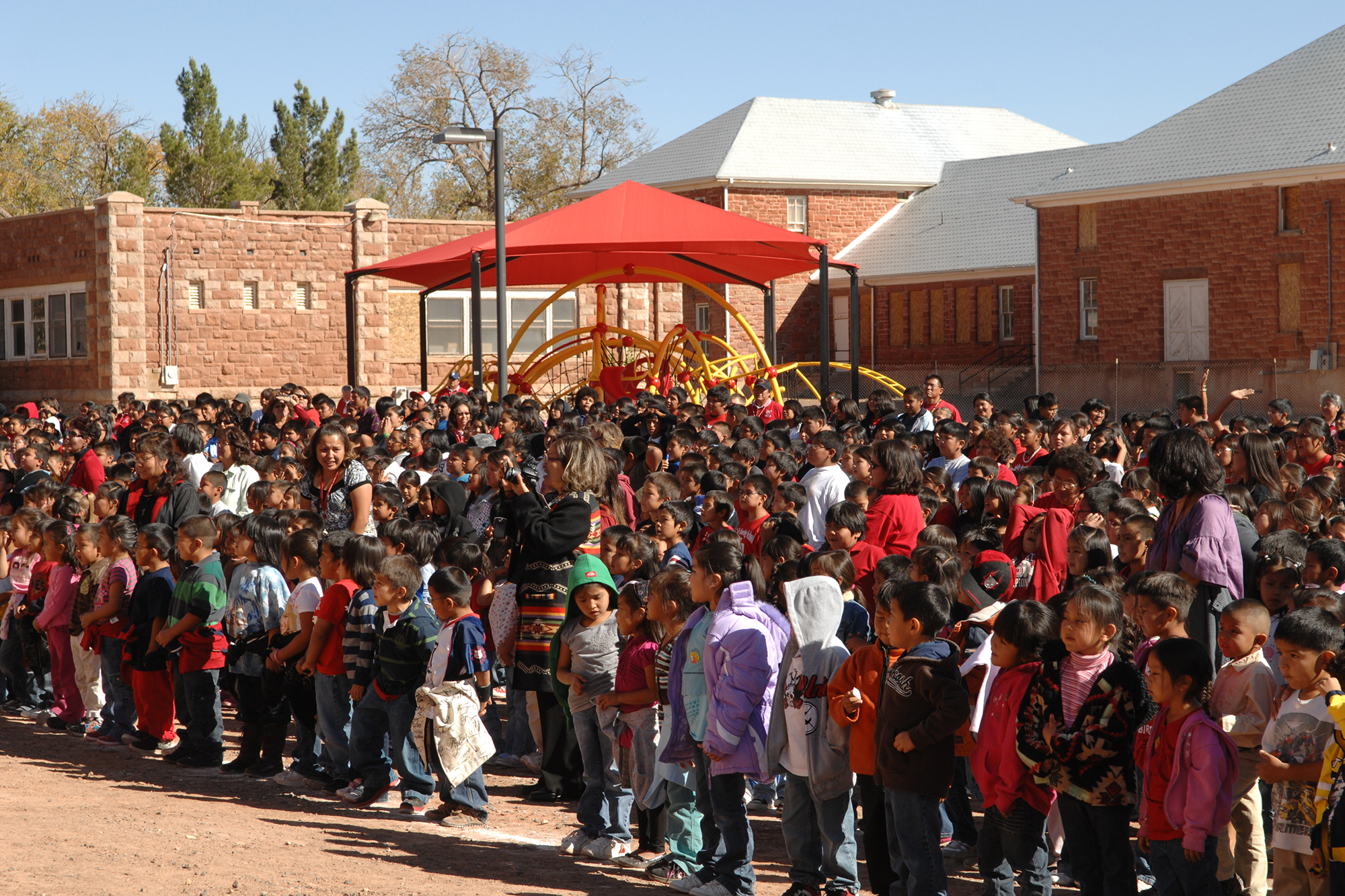 Visit of Secretary of the Interior Dirk Kempthorne to the Tuba City boarding school. Tuba City is on the Navajo Reservation in Arizona and is the largest school in the Bureau of Indian Education system, October 21, 2008. Photo credit: National Archives / Wikimedia

It can be challenging for people outside of Native cultures to understand the importance of weaving indigenous cultural supports into the behavioral health care setting, said Parker. “Ensuring that people feel that they have a provider who is aware of traditional beliefs and or supportive of a combination of different care, to address whatever behavioral health issue it is, is really critical,” she said. “The challenge is, of course, that we don’t have a lot of American Indian and Alaskan Native providers of behavioral health care.”

Karen Severns, behavioral health director for the Indian Health Service Great Plains Area, suggests there is a crucial need for mental health providers who are dedicated to working in rural or tribal communities and are cognizant of the history of Native Americans.

“We need providers — who work with families, children, and communities preventatively — with an understanding of historical trauma and social drivers of health,” she said. “We need to concentrate on strategies that specifically focus on suicide prevention and intervention. Incorporating culturally relevant and evidenced-based strategies at the individual and community levels is critical in addressing the specific needs of each tribal community.”

These conversations surrounding cultural competency are at the forefront of the National Alliance on Mental Illness, and specifically in the grassroots organization’s New Mexico branch.

“A lot of times, if you start talking about mental health, but you’re not interested in engaging with that spiritual part of the conversation, it turns people off,” said Gabrielle Dietrich, executive director of NAMI New Mexico. “Figuring out how to do that conversation in a way that honors people’s culture and the context in which they live their life, I think is a really important thing.”

With mental health providers, there is a responsibility to learn about those that they are treating, Fryberg said.

“We have to do a better job of learning about the constituents we work with and being responsible for having strategies that bring both their individual differences out,” she said, “but also really understanding the depth and importance of issues such as spirituality to overall well-being.”

While the insight and knowledge about how spirituality works is important, Fryberg believes that nonnatives can be good learners and good listeners as well.

While Parker doesn’t feel like this challenge has been fully unpacked within any tribal communities, she does think there are some tribes that have made strides in that area because they have prioritized behavioral care.

“They have been able to secure the resources to be able to not only provide the care but also supplement it with those spiritual aspects of their traditional culture in order to better support folks who are seeking the behavioral health services overall,” she said.

Despite decades of inadequate care, there are indications that the situation may be improving. In March 2022, President Joe Biden unveiled his budget proposal for the fiscal year 2023 and included a nearly $3 billion increase in funding for the IHS, calling for a shift from discretionary to mandatory funding.

While funding has improved within the past 30 years, there is still quite a lag in terms of what is needed and what is actually available under the current funding levels, Parker said. And there are some tribal communities that would prefer not to include traditional care within the IHS.

As a child who grew up in a tribal community on a reservation, Fryberg thinks that federal agencies have to be less patriarchal to tribes.

“When tribes have control over the different domains of their society — mental health, police, justice systems, child welfare — you see less suicide in those communities,” she said. “It’s a way that we undo colonization.

“Ultimately, we save ourselves.”