Tales of Reopening: The Comic

Jackie Kashian walked on stage to loud applause and grabbed the microphone, just as she has done thousands of times in the last three decades. But this time was different: It was her first live show since the pandemic put her business on hold indefinitely.

Kashian, a comedian and writer from Los Angeles, admits to some nervousness and performance anxiety when she’s done television spots or played large venues like Carnegie Hall. This time, though, coming back after the pandemic and 13 months of quarantine “is a different kind of nervous. It felt medical — like there was physical danger,” she remembers. “I came as close as I ever have to having a panic attack. The sheer humanity was nerve-wracking.” It was a show at a club in Lowell, AR. There were 140 people in a room that could hold 180. “Shoulder to shoulder, not masked. The energy in the room was slightly manic.”

She opened her set by addressing the elephant in the room. “So, is this social distancing in Arkansas?” She got a huge laugh. She followed with, “You guys look like you literally looked at each other and said, ‘We don’t care anymore!’” That got an even bigger laugh. The ice was broken, and Kashian, after more than a year, settled into her live set.

But in the middle of her routine, she froze. Kashian has never really experienced stage fright but thinks that must be what it feels like. She wasn’t afraid of forgetting her bits; she was “afraid of being around 150 people that I might kill.” She started pacing, to help unfreeze her brain, and pulled out her setlist to see what she was doing next. “Not proud of it, but not ashamed either.” She laughs about it now. “But it’s an experience I hope never to have again.”

By the second show that night, Kashian says, she made a “very American decision, which was to say ‘Screw everybody, these people chose to come out.’” And while the shows were, in Kashian’s words, okay, “Okay is not what I am looking for. I want my sets to be great, and be carried offstage by a loving audience.”

We’re all learning how to be in public, but few of us are faced with a bunch of fans who want to talk to us and touch us, as Kashian and her comic colleagues are used to. “I’ve spent 13 months being cautious, staying in my house, getting our groceries delivered — so now, a fan patting my shoulder is frankly terrifying,” she said. 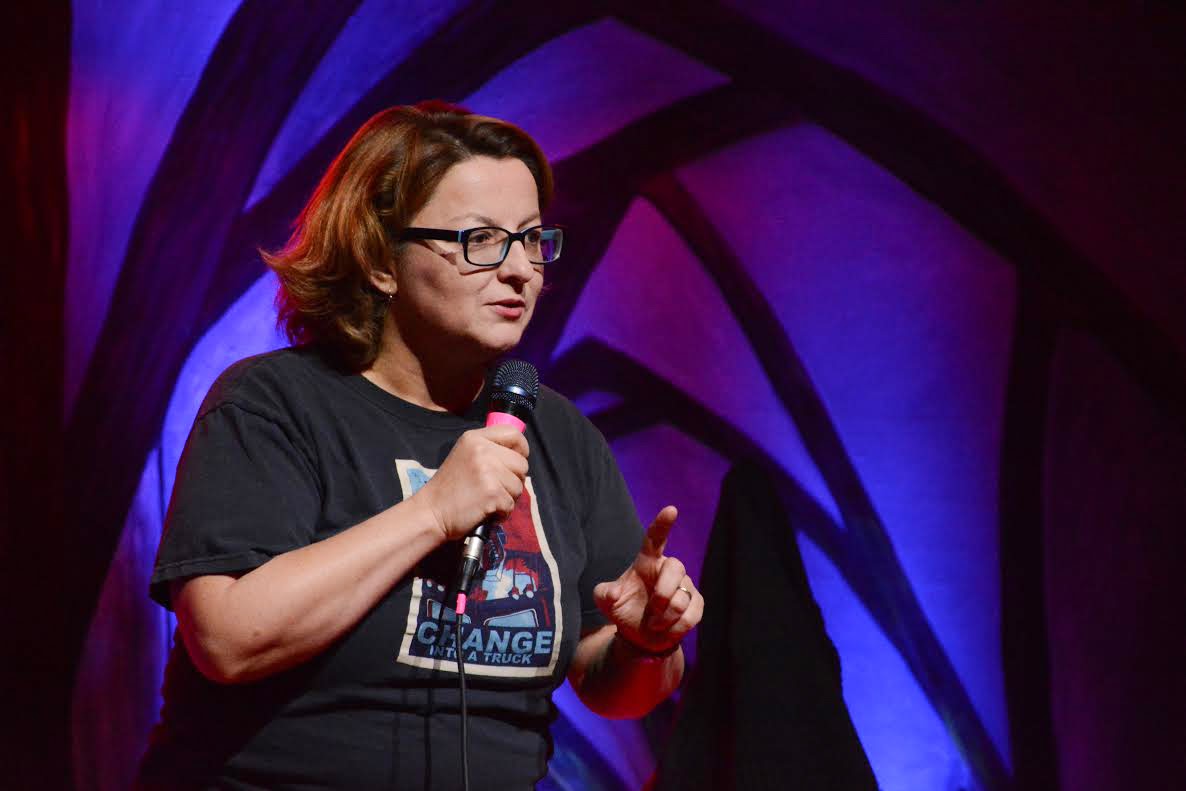 “Going back to work is a decision we all have to make, because we can’t live like this forever,” she said. If stand-up comics don’t work, they don’t get paid; with no live shows, it’s much harder to sell merchandise like T-shirts and CDs. Likewise, if they don’t keep practicing their craft, they get stale and lose their edge. So, during the pandemic, Kashian did what many other performers did when their work life screeched to a halt last spring — she got online. “You have to keep your chops; I have to be able to tell jokes. I have to know how they are formed, you have to say the words, the jokes, out loud, even if it’s into the internet,” Kashian said.

Patience is not the average comic’s strong suit, Kashian says, but she’s tried to “chill the hell out and not think it was the end of my career or my self-esteem. I’ve just done all the things, and tried to keep the comedy going,” she noted.

That said, when stages began to reopen, Kashian jumped at the chance. “My work is not at home. Zoom shows, for as cool as they are, they are not the gig. And they don’t pay a liveable wage.” It took her four days to adjust to Zoom shows, but it’s going to take nine or 10 shows, she expects, before she feels like she’s back on her comedy game.

One issue Kashian notes is that there’s now a glut of performers — everyone who’s been out of work for a year is chomping at the bit to get back. And venue owners aren’t paying as much these days, since they’ve all been economically hit too. They have their pick of performers, and they can choose how much to pay.

While no one knows how this will all affect the future of performances, she mused, she herself is rebuilding her career one step at a time. “The first step was walking out my front door, getting in a cab, going to the airport … and it didn’t end until I finally walked out on stage.”