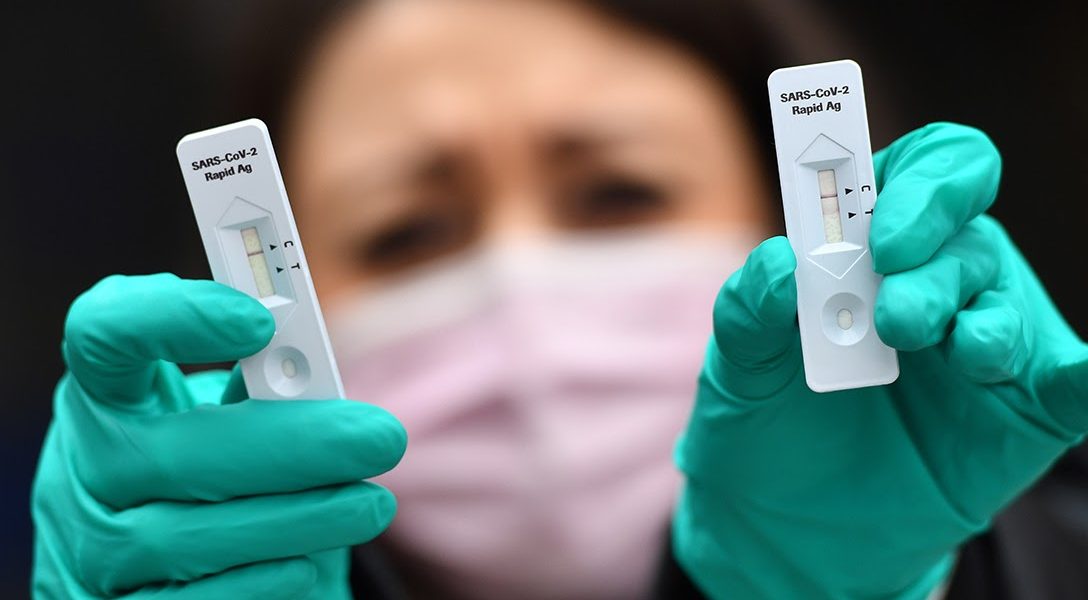 Fast, Cheap, and Under Control: At-Home Testing Can Rein in COVID-19

After a year marked by COVID-19–related illness and death, the images of refrigerated trucks carrying vaccine shipments across the country inspire hope that we may finally turn a corner on the pandemic. But wide-scale production and distribution will take time. Realistically, it could take another couple of years before enough of the world’s population is immunized to achieve global herd immunity to COVID-19.

In the meantime, in the United States, it is reasonable to ask whether shutting down schools and businesses, and limiting travel, is the best way to stem the spread of the virus until there is widespread vaccination. Many scientists and public health experts think there’s a better way.

Scientists have shown that if 50 percent of the population gets tested regularly, we could limit the disease’s ability to spread (the R number) within weeks. This would greatly reduce the pressure on overburdened hospitals and a health care system that is inundated with COVID-19 patients.

Now, one of the hurdles impeding implementation of an effective population testing program has been cleared. The FDA just announced its approval for the first at-home test for COVID-19. The Ellume test is a rapid antigen test similar to the one released for use in late August. The important difference is that the Ellume COVID-19 Home Test doesn’t require a prescription or a lab to interpret the results. A person can buy it at a drugstore, collect a nasal swab, run the test, and get results in 20 minutes or less. A person’s viral load profile (blue line) over time is shown. The high analytic sensitivity PCR test is able to detect low amounts of virus in samples even before and after a person is infectious. The low analytic sensitivity, rapid antigen test only detects the virus in samples from people whose viral loads are high enough to infect others. Photo credit: Chart use with permission from The New England Journal of Medicine ©2020

This at-home, rapid antigen test is one of two different types of diagnostic COVID-19 tests. There is a lot of confusion in the media and in the medical profession about their particular advantages and best use. Understanding the difference may help kickstart a population testing program that could protect us while we wait for enough people to develop immunity from the vaccine. Scientists predict that ending the ongoing epidemic without the need for further protective measures, such as social distancing, will require that 75 percent of the population be immunized with a vaccine that has, at the least, an 80 percent probability of preventing infection.

PCR tests are the tests that most people are familiar with. They are used in the clinic to determine whether you are positive for COVID-19 or whether you have recovered and are now COVID-19 negative. The test is very sensitive (see high analytic sensitivity in the figure, above) and can detect the virus even in samples from people who are not infectious.

Rapid antigen tests are not as sensitive (see low analytic sensitivity in the figure, above) as PCR tests, but this is not a problem since they are not meant to diagnose the disease.  They are meant to monitor general levels of infection in a community. Their power is that they are capable of detecting COVID-19 in people when they are the most contagious. All of the antigen tests, whether prescribed or at-home, are fast (results in 15-30 minutes) and inexpensive ($5 or less for the Abbott test). They’re also easy to administer: a sample is taken from the nose with a swab, diluted in a buffer, and added to a card containing a membrane with COVID-19 detecting antibodies. If the sample is positive, a colored line appears on the card. Accuracy Isn’t as Important as Frequency

COVID-19 antigen tests do not need to be 100 percent accurate. What is important is how often a person is tested. Widespread population testing — along with frequency of testing — are considered the essential parts of a program aimed at managing COVID-19 infection rates in our communities. Simulations done by scientists predict that outbreaks of the virus could be reduced to levels that don’t strain health care systems even if only half the people in a community use rapid antigen tests every four days. Fifteen million tests a day would suffice to stop outbreaks across the US.

If done right, rapid testing offers a way to restore economic and personal security by separating those who are safe to work, travel, and go to school from those who should quarantine at home until their COVID-19 infectious status is resolved. Such a testing regimen would greatly reduce the number of people on the streets who are carrying the virus, even if they have no symptoms. In turn, this would reduce the spread of the virus significantly over a short period of time. Testing of new groups would continue the downward spiral of cases.

All of this will take money. At a cost of $5 per test, testing half the US population every four days will cost $69 billion a year. A recent congressional bill included $75 billion for COVID testing and tracing. Our ballpark figures back up this figure, although economist Paul Romer’s estimate of $100 billion is likely closer to the real price tag. But it is still billions of dollars less than the economic bail-out packages that have been proposed to fix what could have been prevented in the first place.

Getting people to take tests every four days and report the results will require a strong national commitment and programs to educate and engage the public. The results of all tests will need to be reported, and people who test positive will need to quarantine for 10-14 days.

Digital tracking apps such as Abbott’s Navica mobile app or Common Pass will allow users who test negative to go about their daily lives. Masks and social distancing will still be required as a preventative measure for instances where test results may be false negatives.

A widespread vaccine is still a distant dream. A testing program with monitoring and enforcement of quarantines, along with an acceptance of behavioral changes that include mask wearing and social distancing, could tide us over until that dream comes true.

For sources and additional reading see: