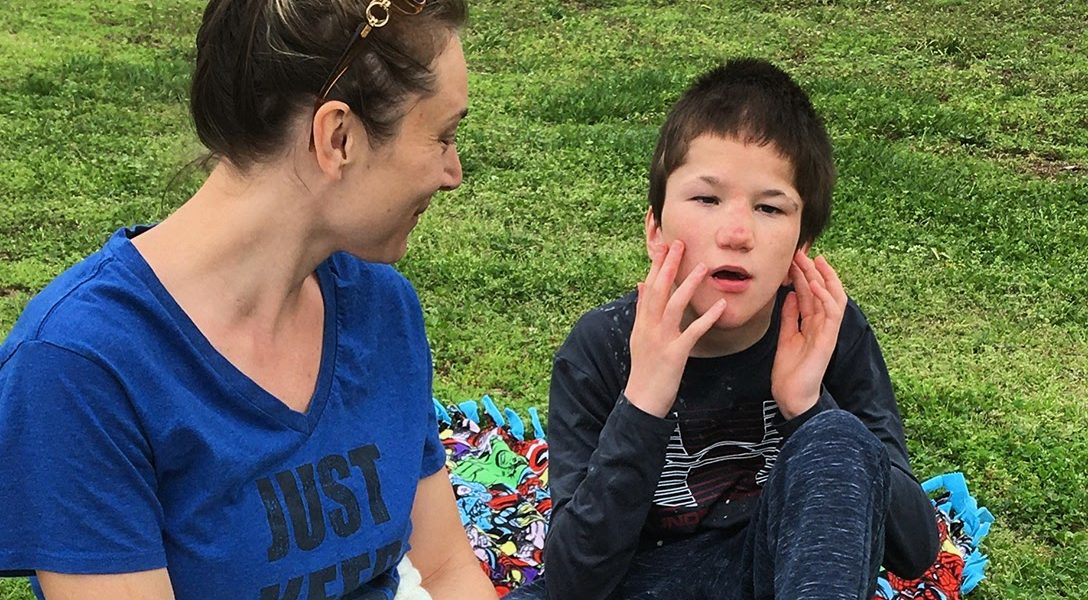 This story is part of WhoWhatWhy’s ongoing series on the challenges and opportunities the coronavirus pandemic poses for the US education system on all levels. A team of our reporters, all stakeholders in the education system, is specifically looking at those education-related issues that others are not covering, to examine how the coronavirus is affecting America’s most vulnerable populations.

“It’s not a ten-second scream,” says his mother, Jessica Ronne. “It’s a blood-curdling scream that rattles you to your core, and you can’t escape it, and there’s no remedy.”

Lucas was born with damage to his brain after suffering a stroke in utero. He was expected to die at birth. Instead, he defied all odds and medical expectations. He survived brain surgery when he was one week old, and with intensive therapy he eventually learned to walk. Today, he is even able to speak with a limited vocabulary.

His physical and mental equilibrium, however, depend upon a rigid structure, much of which has been provided by the public education system, first in Michigan and now in Tennessee. When his school shut down due to the pandemic, that structure was ripped away.

It’s anyone’s guess when Lucas will be allowed to return to school. The academic year is over. Summer has always been an “unbearable” season for the family. Even before the pandemic, their Tennessee school district offered only one hour per week of “summer school” for students with special needs. Now, there is nothing. A ‘Free and Appropriate’ Education

In theory, the Individuals with Disabilities Education Act (IDEA) guarantees children with special needs a “Free and Appropriate Public Education” (FAPE). In 2018-19, 7.1 million children received services under this provision.

Students with learning disabilities and speech or language impairment are the most frequent recipients of assistance (33 percent and 19 percent respectively). Schools provide a range of services, from making minor accommodations available, such as a room with reduced distractions for children with ADHD, up to to the provision of a full-time, one-on-one care provider who accompanies a child through the school day. Each child’s needs are determined by the child’s parents and the school system each year and documented in an Individualized Education Program (IEP).

The pandemic shredded most 2020 IEPs when it forced schools to shut down. As districts began to provide remote instruction to all their students, some worried that they would be held liable for their failure to provide IEP-mandated services. In some states, school districts initially gave parents the choice of accepting reduced services for the duration of the pandemic or of waiving their children’s rights to a FAPE entirely.

According to Ron Hager, an attorney with the National Disability Rights Network, these waiver requests were “highly illegal,” and after legal challenges they were quickly eliminated from the districts in which they were proposed.

Waiver or no waiver, many parents feel that the remote learning alternatives provided did not meet the needs of their children.

“No district can do it perfectly,” Hager told WhoWhatWhy, but “a lot of states just ended the year early, and are saying they did not provide an ‘inadequate’ education — just an ‘unfinished’ education. Well, whose fault is that?”

School districts contend that they are doing their best. They have provided students with computers and internet access; teachers have utilized new tools for distance learning, put their own mental health needs aside to support their students’, visited their students’ neighborhoods, and even continued to teach remotely while recovering from COVID-19 themselves.

Nevertheless, hardly anyone argues that virtual alternatives match the educational experiences offered in a physical classroom. According to projections from the Brookings Institute, “Students could begin fall 2020 with roughly 70% of the learning gains in reading from the prior year relative to a typical school year. In mathematics, students may show even smaller learning gains from the previous year, returning with less than 50% of the gains.” The parents of children with profound needs, however, are not concerned about deficits in reading or math skills. They are concerned about the loss of crucial therapies. According to the National Association for the Education of Young Children, the school district acts as a coordinator for all services the child receives from the age of 3 to 21, including therapies for children like Lucas. In his case, this loss of services has been catastrophic.

When the school system functioned fully, his mother Jess explained, Lucas worked with at least six caregivers every day.

Ronne’s school district has tried to help during the shutdown, but the assistance they have offered has been only minimally useful to Lucas.

“The teachers reached out via email two to three times and suggested some websites; but Luke is not going to look at websites,” Ronne said. “He needs hands-on activities. The speech therapist has been the most helpful. She dropped off some things and went over them.” Lucas was willing to work on these tasks for about 30 seconds, mainly to “pacify” his parents; then he dropped them, saying that he was “all done.” The problem, Ronne determined, was that Lucas associated the materials with school, not with home.

Lucas began attending school in Michigan when he was three years old. At the Ottawa Area Center, he was able to be in school year-round; students may remain enrolled in school full time until the age of 26. Most of his therapies and even his dental care were provided on school grounds to make scheduling easier for his family. These services not only benefited Lucas, they also supported his parents.

“It was such a help,” Ronne remembers, “because he had such profound special needs, and it was exhausting. I had a one-year-old at the time, too. I very quickly grew to trust the school district he was in in Michigan, which was remarkable.”

Many families rely on the school system as their only regular relief from having to care for their children with disabilities. Parents struggle to find adequately experienced caregivers for children with complex medical needs, but there is ample evidence that “respite care” is crucial for caregivers’ mental health. Before the pandemic, the Ronnes occasionally employed a part-time aide during the summer, but that has been impossible this year due to social distancing requirements. The family is exhausted by providing round-the-clock care for Luke.

“I am way more desperate for Luke to go back to school than I am for my other children,” Ronne explained. “I absolutely need those supports in place.”

Preparing for the Fall

School systems across the country are in the process of developing concrete plans for how they will carry out instruction for the 2020-21 academic year.

“I am hearing a lot of states thinking they may not return in the fall, or they will return in a very truncated manner,” said Ron Hager, who has been working with districts and advocates as they develop their programs. New York State, for example, is considering offering split sections so that only half of the students are in school at one time. Students attending classes will have to wear masks.

Advocates fear that this may not be a practical long-term solution for children with special needs. As in Lucas’s case, many of these children need a reliable routine in order to thrive; an irregular schedule is the last thing that their parents want. Hager added that mask-wearing — which is unpleasant for any child — may be impossible for children with developmental disabilities. For children who experience autism or ADHD, it is going to be extremely difficult.

Valerie Williams, director of government relations for the National Association of State Directors of Special Education, told WhoWhatWhy that she also also questions the practicality of requiring masks for students.

“For younger kids, it hinders their ability to read social cues … If a student is deaf or hard-of-hearing and they need to lip-read, you cannot do that with a regular mask on, you need a special mask which has a clear section at the bottom, which is specialized … and our schools probably won’t have a lot of those.”

Ronne has no doubts about the feasibility of requiring Lucas to wear a mask: “Luke will not keep a mask on. That will never be an option.”

Creating and implementing effective educational strategies while protecting the health of students and staff is enough of a challenge by itself. But in light of the financial crisis created by the pandemic, these schools also face significant budget cuts.

As of May 20, the Center on Budget & Policy Priorities predicts total state revenue shortfalls of $765 billion between 2020 and 2022. The National Education Association projects that much of that shortfall will be taken from education funding. The Center’s June 6 report warns that “state general fund revenues in support of education could fall by about $200 billion, affecting about one-fifth of the education workforce after accounting for the use of state rainy day funds and funding available under the CARES Act.”

According to Williams, districts may be forced to eliminate as many as 1.7 million jobs over the next three years.

“People are sounding the alarm” about these shrinking budgets, said Williams, “but I don’t know that that has translated into an all-out effort to make sure that education is included in the next bill.”

As schools struggle to accommodate these budget cuts, many are laying off teachers and expanding class sizes. An even more common approach, however, is to lay off other members of school staff: janitors, cafeteria workers, and also the paraprofessionals and therapists who work with children with special needs.

Arizona, for example, had planned to spend millions hiring new counselors this fall; these hires seem unlikely now, just at the time when students will need them most.

Williams believes that it is crucial for the next bill to allocate funds specifically to the IDEA. “When big buckets of money are provided to the states,” she said, “and there are so many needs, [special education programs] might not take priority when you stack them up in the list.”

Ronne is hopeful that the universal challenges presented by the pandemic increase society’s empathy for the daily struggles faced by these children and their caregivers.

“The rest of the world,” she said, ”is now experiencing what special-needs families often experience — isolation and exhaustion and stress and anxiety and mental health problems.”

Raising awareness of the under-recognized population of parents caring for disabled children has long been a “passion project” for Ronne. She founded a nonprofit organization, the Lucas Project, in 2013 to provide grants to organizations that provide respite care to qualified children and their families.

While homeschooling Lucas and his siblings through the pandemic and writing her second memoir, Ronne has also started working with two local filmmakers on a documentary, Unseen, which explores the mental health crisis of special needs caregivers.

There have been some compensations during this difficult season. Lucas’s vocabulary has increased due to constant communication with his siblings, and Ronne’s other children have proven themselves helpful and supportive.

Nevertheless, Ronne is desperate for Lucas to return to school.

“In the beginning, I was concerned about contagion,” she said. “Now, mental health trumps physical health for me.” Lucas’s unhappiness has been so profound that Ronne made the difficult decision to give him psychiatric medication for the first time in his 15 years.

“I [called] his doctor in tears and said we need to find something — I can’t do this. And she said, ‘Well, the best thing we can do for him to is to make him comfortable at home, because the next step is the psych ward.’” Though the medications have helped, this is not an acceptable long-term solution for Ronne.

“I hate it,” she sighed. “I hate medicating him to make him like a zombie with every cell of my being… but at least he does not scream all day.”