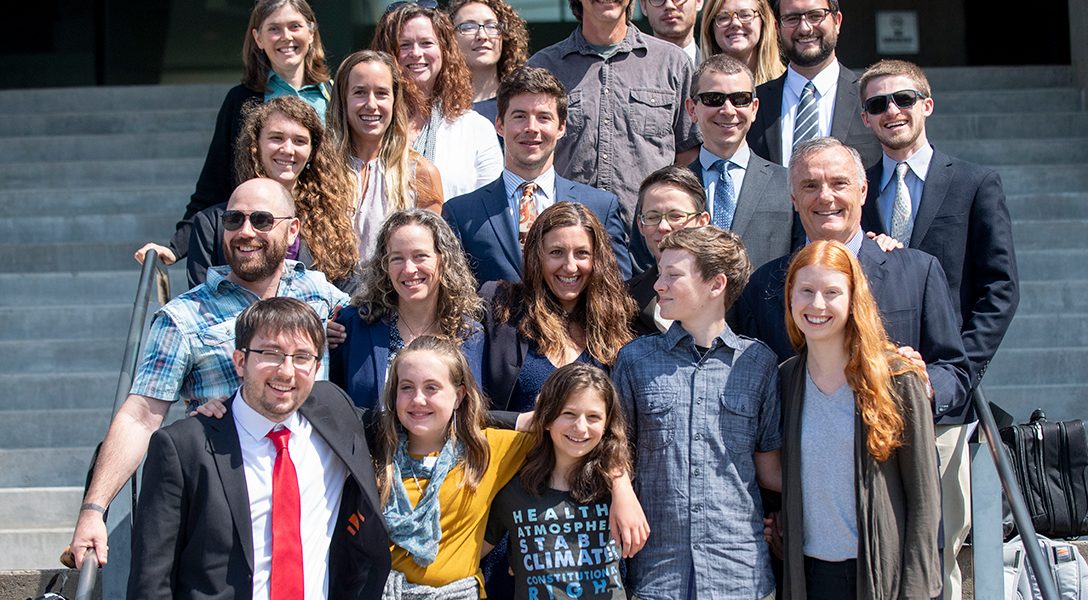 Youth plaintiffs, attorneys, and staff from Our Children's Trust stand on the steps of the federal courthouse in Eugene, Ore., after a hearing in the Juliana v. United States climate change lawsuit June 6, 2018. Photo credit: © Robin Loznak/ZUMA Wire
Environment

In a bold move, the young plaintiffs trying to force the US government to take action on climate change are petitioning the Ninth Circuit Court of Appeals to halt the development of new sources of fossil fuels. As they wait for a court date, they charge, climate change continues to jeopardize the planet.

The 21 plaintiffs, ranging in age from 11 to 22, in Juliana v. United States — which the US government has kept from going to trial through legal maneuvers — filed a motion Thursday night for a preliminary injunction to halt new fossil fuel development.

“Our experts have told the court that the government’s development of more fossil fuels is extremely reckless and is harming these plaintiffs,” said Julia Olson, co-counsel for the plaintiffs and executive director and chief legal counsel of Our Children’s Trust. “It is up to the courts to preserve plaintiffs’ rights, and minimize further irreparable harm to these young people, during the pendency of this interlocutory appeal.”

The Juliana case was brought in 2015. It asserts that the government is violating the youths’ rights by failing to curb carbon dioxide emissions. The government has filed several motions to dismiss or postpone the trial.

In addition to the proposed March 20 sale, the motion points to 60 new oil and gas pipelines, 32 new liquefied natural gas and coal terminals, and one new deepwater-port oil export facility awaiting federal approvals. All would be halted by the injunction.

Increased carbon dioxide levels in the earth’s atmosphere pose a number of severe ecological and health risks, which have already been felt by some of the plaintiffs.

In a declaration filed with the court, 17-year-old Nick Venner from Colorado detailed his struggles with asthma, saying that the poor air quality leads to coughing fits, especially when exercising. “I can’t even go outside at all on particularly poor air quality days,” said Venner. “With particularly bad asthma attacks, I develop bronchitis-like coughs, which regularly cause me to miss multiple weeks of school at a time, each school year.”

Studies have shown that human-caused climate change may not only be exacerbating asthma in people who already present asthma, but actually increasing people’s susceptibility to it, therefore increasing its prevalence.

In Hawaii, 19-year-old plaintiff Journey Zephier noted the impact climate change has had on his own immediate environment.

“I used to be able to swim at Kapa‘a Beach near my old house, but there is no beach left due to sea level rise,” Zephier stated in a declaration filed with the court. “It’s just a small strip of sand; the rest of the beach has eroded away. It is so upsetting to see such an important place in my life just be washed into the sea. Watching the beaches erode away and disappear brings me deep emotional pain.”

Aside from the direct effects that climate change has on humans, international expert witnesses working pro bono on this case have filed other declarations explaining the economic benefits of the injunction.

“An injunction on future leases and mining permits for extracting coal on federal public lands and on future leases for offshore oil and gas exploration and extraction activities, alongside enjoining new fossil fuel infrastructure requiring federal approval will prevent, not cause, economic harm,” economist and Nobel Laureate Joseph Stiglitz said in one such declaration.

Experts predict that the economic impact of climate-change-induced rising sea levels and public health crises will be staggering. Factoring in deaths, disease, lost wages from too-hot working conditions, abandoned coastal properties, and other effects, the ultimate costs of global warming each year are estimated to be in the hundreds of billions of dollars.

A report in 2017 noted that climate change cost the US economy at least $240 billion a year over the previous 10 years. And that number, according to National Geographic, did not include September 2017’s three major hurricanes or 76 wildfires.

The economic toll for those disasters alone is estimated at more than $300 billion — enough to provide four years of free tuition for all 13.5 million US students enrolled in public higher education.

“Our government must protect the security and futures of our young people,” said Vice Admiral Lee Gunn, USN (Ret.), an expert on energy, climate, and security. “The American people have every right to expect and demand more leadership from our public servants and elected officials in the face of the most serious threat to our national security — climate change.”