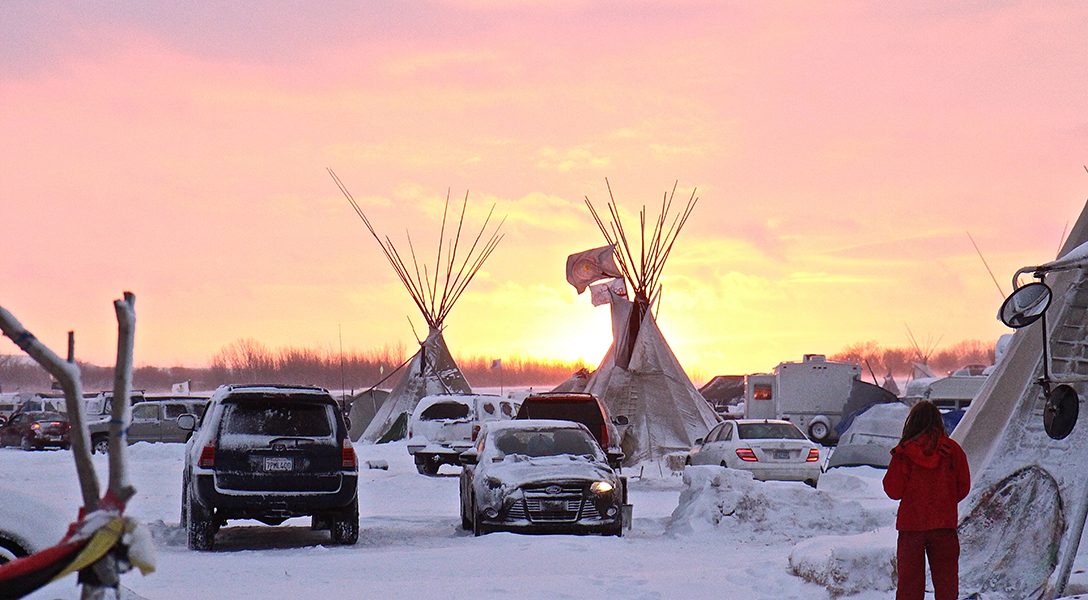 The Work Is Not Done at Standing Rock

After the news broke Sunday night that the U.S. Army Corps of Engineers had denied Energy Transfer Partners’ permit to continue building the Dakota Access Pipeline near the Standing Rock Reservation, the gathered protesters celebrated but their mood remained apprehensive.

Many veterans and “water protectors” believe that the Army’s action was a ploy, prompted by the oil company’s desire to avoid the public relations disaster that would ensue if law-enforcement officers clashed with the thousands of U.S. military veterans who had descended upon Standing Rock, vowing to shield the camp.

Many also believe that the company will continue building and simply pay a small fine for not having a permit.

Still, the hard-fought victory gave the protesters something to celebrate for the first time. WhoWhatWhy contributor Daniel Brown was on the scene and sent us this first-hand account:

The “Wellness Center,” made of plywood and canvas, violently shook from 50 MPH winds as I awoke Monday morning. I put my layers on, went outside and was immediately greeted with near whiteout conditions and thick falling snow. From the Center’s perch on a hill, I looked down upon  the camp — too wide to grasp in one pan — and saw teepees, tents, campers and makeshift homes peppered throughout the valley.

The wind and snow continued throughout Monday and into Tuesday, posing many logistical problems for the water protectors.

Nevertheless, we marched that afternoon. About 1 p.m., I walked up the main roadway lined with flags of all kinds where the marchers were supposed to congregate. About 100 people had already left, so I ran down the snowy road toward Blackwater Bridge near the construction site, snow blowing in my face so hard that I was practically blinded.

We were stopped near the bridge, blocked by members of the movement on orders from Standing Rock Chairman Dave Archambault II.

No one is quite sure why he ordered the stand down: some say political negotiations, others because of the weather.

I looked back and saw a group of hundreds more — some carrying flags, a few even riding horseback — appear out of the white haze, chanting and shouting as they collided with the lead group. I ran up a hill that overlooked the road, where journalists and other water protectors had ascended, to get a better view.

I saw one man dressed in fatigues and asked him if he was a veteran. He said he was and that his name was Jimmy. I asked him why everyone was marching since construction had been halted and security and law enforcement were not present. “It’s a show of force,” he said. After speaking to him for a few minutes, I hopped dangerously down the snowy hill and onto the road. At one point, a veteran stood up on a trailer and gave an impassioned speech about diversity and against oil companies, ending it by leading a chant of “freedom.”

I was completely drenched — so was much of my gear— and the weather only continued to worsen. So I drove in a caravan of vehicles out of camp and south down Highway 1806 toward Prairie Knights Casino, which was approximately seven miles away. By then it was dark and the snow was blowing so badly that I could barely see the icy road. Cars were off the highway left and right, and I gripped the steering wheel so tightly that my hands began to sweat. After 30 minutes, I reached the casino and sighed with relief.

I rushed inside and attempted to get a room, but they were completely booked as I had suspected.

As time passed, I noticed everyone going into a large auditorium in a wing of the casino called The Pavilion. People began spreading out their bedding, so I followed suit. Some sat in the casino bar, drinking and smoking. Others remained in The Pavilion, where three Native comics performed to the delight of a laughing audience. I grabbed a quick bite at the bar and then laid down on my sleeping bag and drifted to sleep to the sounds of comics telling stories about life on the “Rez.”

As of Tuesday night, we’re still stranded in the casino, and the highways in all directions have barely opened. Throughout the last 24 hours, I roamed around the casino, talking to people about what they thought would happen next.

AJ, an Army veteran from Brooklyn, said he worries about the movement once Trump is inaugurated. “He seems to be more business friendly to the detriment of the environment…he came out as pro-coal when it’s clear that coal is bad for the environment.”

Kelly McCall said she believes the veterans’ presence helped in getting the permit denied, but “I think more importantly it’s all the work that the Sioux have been doing.”

She is also uncertain whether the oil company will halt construction, divert the route, or “just stand down until Trump steps into his presidency.”

“What I’ve heard is that [Energy Transfer Partners] will continue to build and pay the fine,” said Ryan Miller, a Marine veteran and activist from Oakland. He also said he has no hope for a Trump presidency and that ‘us among the resistance will have to be stronger.”

And as for the notion that the oil company did not want a PR disaster, he “absolutely thinks that’s true…I think veterans have a real opportunity here to recognize the power we have.”

While the water protectors are happy that the permit was denied, most remain untrusting of the government’s and oil company’s intentions. It seems now, perhaps more than ever, the outcome rests atop a double-sided precipice, and could slip down in either direction.