Wind Power Is (Finally) Having a Moment

Wind sweeps across the plains of north-central Oklahoma, spinning the blades of 356 turbines at the Traverse Wind Energy Center. The 998-megawatt facility — the largest wind project built all at one time in North America — came online in March.

It’s a sign of the times, as wind power continues to grow across middle America.

Last year, wind was the fourth largest source of electricity generation in the United States — following gas, coal, and nuclear — and the largest source of renewable energy. On March 29, it even briefly shot into second place behind gas.

Onshore wind dominates… for now. Texas leads the nation in wind and produces 20 percent of its generated electricity. In Iowa, wind generates 57 percent of the state’s electricity, with Kansas (44 percent) and Oklahoma (36 percent) following.

The pandemic didn’t slow wind development much. The past two years have seen record-breaking installation. In 2020, turbine capacity increased 14.2 gigawatts, with another 17 gigawatts following in 2021. This year, 7.6 gigawatts are expected to come online — with half of that capacity coming from Texas.

Utility-scale facilities like Traverse steal the headlines, but much like rooftop solar, there’s also big promise with small-scale, distributed projects. A report from the National Renewable Energy Laboratory found that projects ranging from a 1-kilowatt off-grid turbine to a 10-megawatt community-scale project could make a big contribution to the country’s energy needs. In fact, half of our annual electricity consumption could come from smaller, distributed wind capacity, especially when paired with solar or battery storage.

Right now, though, the biggest focus is on large projects — in the water. 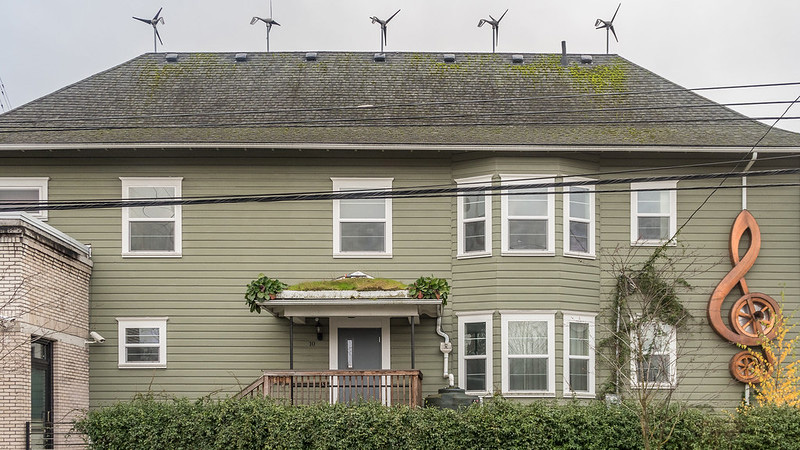 A house in Portland, OR, with wind turbines. Photo credit: Mark McClure / The Revelator (CC BY-NC-ND 2.0)

After decades when offshore wind stagnated in permitting and political tangles, the Biden administration approved the first two commercial-scale offshore wind projects — Vineyard Wind off Massachusetts and South Fork in the waters between Rhode Island and New York. Nearly a dozen more projects are moving through the permitting pipeline.

Northeast states have jumped to the forefront of the push. New York announced plans to build 9 gigawatts of offshore wind capacity by 2035, and about half of that is already under development.

The densely populated region is likely to be a hotspot for wind development.

An auction in February drew $4.37 billion in bids for wind development rights off New York and New Jersey, in an area known as the New York Bight. “That is more than three times the revenue received from all US offshore oil and gas lease auctions over the past five years,” reported Reuters. 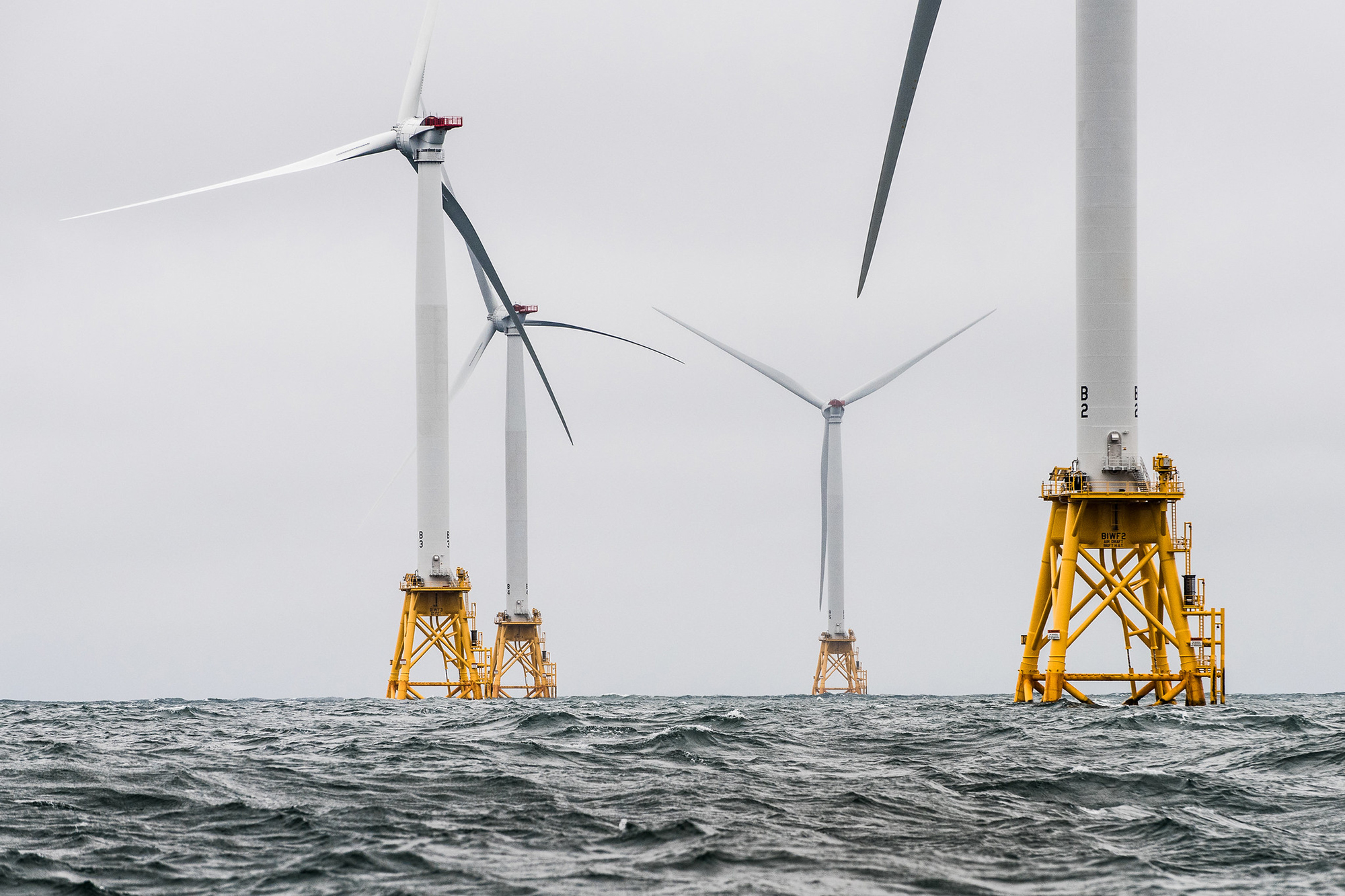 In May, TotalEnergies and Duke had the winning bids of a combined $315 million for two lease areas in federal water off the Carolinas. If fully developed, the projects could generate 1.3 gigawatts of offshore wind energy.

The Gulf of Mexico, where thousands of oil platforms dot the waters, may soon be home to offshore wind turbines as the Biden administration reviews 30 million acres of Gulf waters off Texas and Louisiana for possible wind projects.

The Interior Department’s Bureau of Ocean Energy Management (BOEM) is expected to release a draft environmental assessment this summer on how offshore wind development would affect the region. Offshore wind jobs are also touted by the administration as a “just transition” for oil and gas workers in the Gulf who are already experienced working on offshore platforms.

In California, wind generates 7 percent of the state’s electricity. That all comes from turbines on land; but in May, the California Energy Commission recommended building 3 gigawatts of offshore wind by 2030 — and growing that to 10, then 15 gigawatts by 2045.

The federal government has also taken a step toward a lease sale in federal waters off California. Expected in the fall, it would be the first along the Pacific Coast. At the end of May, the Department of the Interior issued a proposed sale notice for three possible areas of offshore wind development — one in the Morro Bay Wind Energy Area, off central California, and two in the Humboldt Wind Energy Area, off Northern California.

This opens a 60-day public comment period on the proposed lease areas. If approved, their eventual auction could lead to projects that generate 4.5 gigawatts of offshore wind energy — enough to power 1.5 million homes. 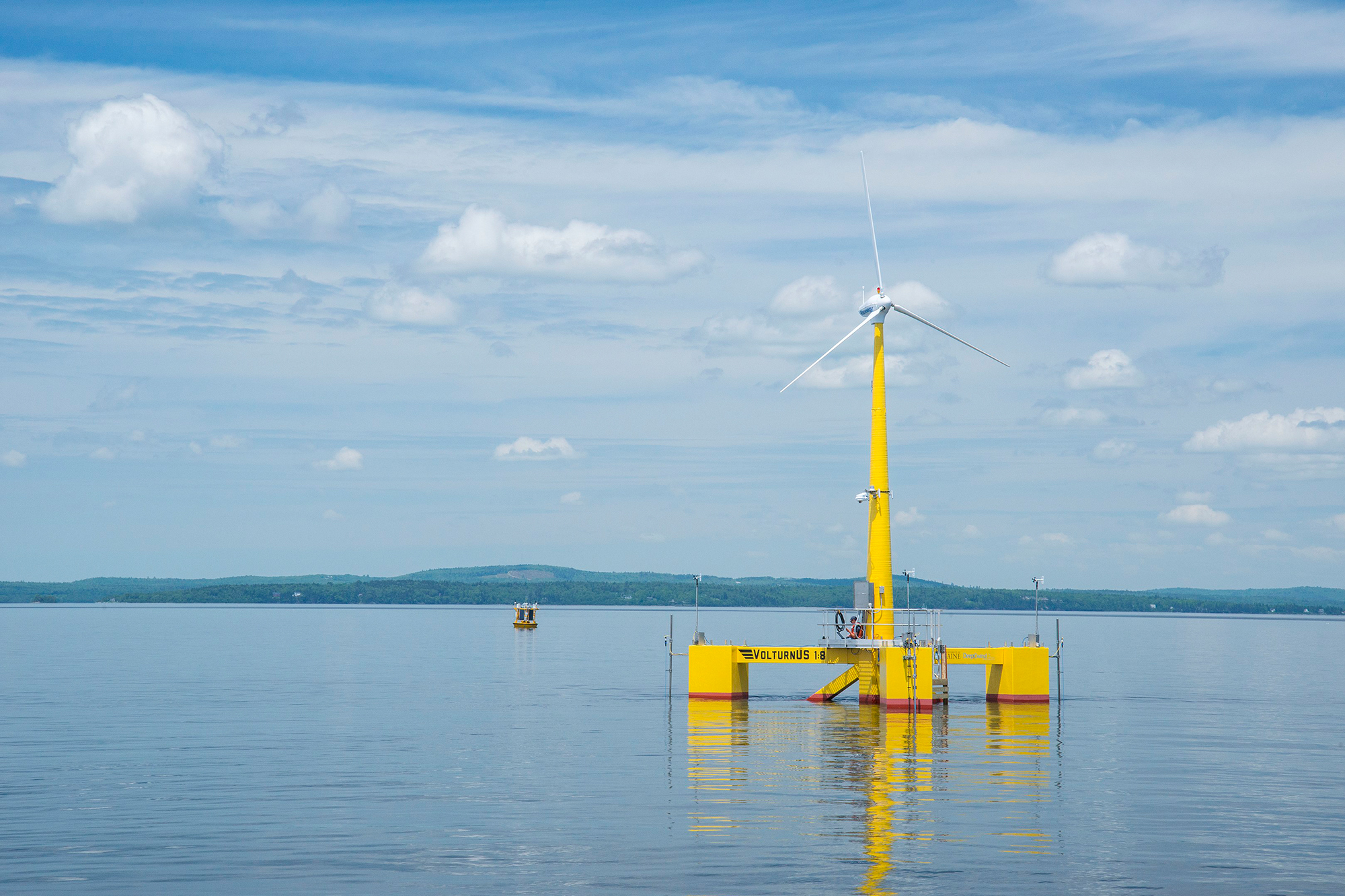 Offshore wind development in the Pacific will look different than in much of the Atlantic. Because the waters are much deeper, turbines off California will be floating instead of fixed to the ocean floor. The technology is new to the United States but has been in use in European waters for years.

It’s likely to catch on. Oregon officials plan to announce a goal of 3 gigawatts of floating turbines, and Washington could add 2 gigawatts.

It’s not just the West Coast; Maine hopes to explore the possibilities, too. The state has submitted an application to the BOEM for a 15-square-mile floating offshore wind research site to refine the technology in the deep waters of the Gulf of Maine.

Wind’s progress over recent years is likely to face some speed bumps that could slow — but not halt — the pace of development. Projects will need to be cited and managed to minimize environmental harm. Migratory birds are a particular concern with the development of offshore facilities; so are marine mammals that could become entangled in cables from floating turbines. Other ocean users — like fishers — have pushed back against coastal offshore wind projects.

Supply chain disruptions, rising interest rates, and economic unease could also affect growing clean energy companies. But experts say renewables are in a better position now than ever before to ward off a downturn.

What could help ensure favorable winds, though, would be strong policy supporting clean energy — something Congress has yet to deliver. Of particular concern is the fate of the Build Back Better Act, which has been stalled by holdout Democratic Sen. Joe Manchin (WV) and a slew of Republicans. If passed, though, it would extend wind and other production tax credits for another decade and help support manufacturing credits for components like wind blades and offshore foundations. That would add more fuel to the fire.

“If it is somehow revived, the clean energy tax title contained in the stalled ‘Build Back Better Act’ would represent one of the largest investments in low carbon and carbon-free energy deployment in the nation’s history,” reported E&E News.

Democrats haven’t given up on the effort yet. If successful, it would give a big boost to the wind industry at a time when the United States desperately needs to make up ground in the climate fight.

As does the rest of the planet. The Global Wind Energy Council — which projects that the world will add more than 110 gigawatts of wind installations each year through 2026 — warns that growth still needs to triple if we hope to avoid climate catastrophe.

That growth could be on its way. The European Union expects to add a record amount of offshore wind this year, while Chile signed a deal in April for three offshore wind developments and a new wind one just started construction in Japan. Meanwhile, Taiwan’s biggest offshore wind facility went online April 21, and the first in the Mediterranean started generating electricity the same day.

Those are favorable winds. Whether they’re strong enough remains to be seen.