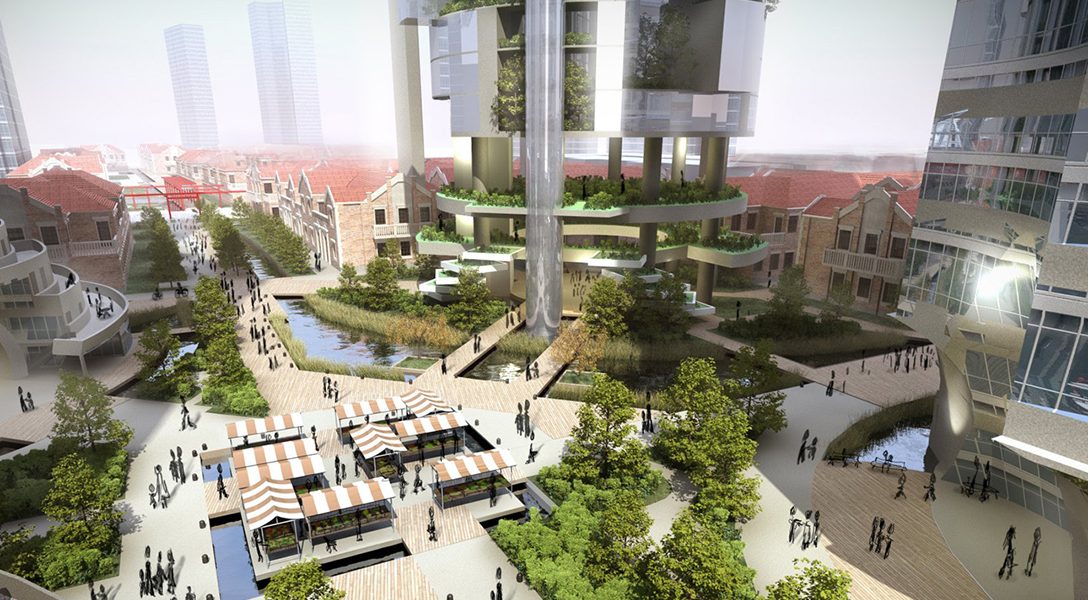 Part of the Sustainable Urban Masterplan for Shanghai, China by Except. Photo credit: Except / Flickr (CC BY-SA 2.0)
Environment Government Integrity

Will Zeal for Profits Hinder High-tech Farming from Feeding People?

Vegetables grown on modular indoor farms in the hearts of cities may soon give roadside you-pick farms a run for their money. From produce ordered on-demand from smartphones to retrofitted shipping containers growing baby kale in the dead of urban winters, the future of farming looks ever more high-tech.

So-called vertical farming appeals to consumers devoted to clean eating and sustainable futures. Its potential to mitigate impending crises in the food system, like climate change, malnutrition and the challenge of feeding growing urban populations as the number of farmers drops worldwide, has attracted an array of investors and entrepreneurs. But can these typically venture-capital-backed businesses — which currently grow a tempting array of greens and herbs but little else  — disrupt the massive and influential reach of big agriculture? That is far from certain.

An Urban Forest of Food

In the future envisioned by Dr. Dickson Despommier, author of Vertical Farming: Feeding the World in the 21st Century, cities and the surrounding communities will house intensive agricultural production.

“They liken Manhattan to a forest of skyscrapers,” he told WhoWhatWhy, “I love that image because, yes, let’s make Manhattan imitate a real forest!”

A central column will house a massive freight elevator and utilities that allow the building to recycle the vast majority of its water. The behemoth will run on renewable energy. Vertical farmers share a common sentiment to, as Dr. Despommier put it, “get the hell off the grid.”

But the dream of this type of farming clashes with the way farming actually operates today. Agribusiness, supported by the federal government, is focused on raising a few cash crops. Of the $25 billion spent yearly on farm subsidies, 75 percent goes to just 10 percent of farmers. That 10% represents large scale commercial farms growing commodities for the global marketplace, raising livestock on feedlots, and turning considerable profits.

“People aren’t farming to raise food for people,” Despommier said, “they are raising crops to make money. It’s all about which crops the world needs rather than us.”

Federal support for agriculture was born in the 1930s to maintain a degree of stability in the business of farming commodity crops. A powerful lobby and a revolving door between industry and public office has reinforced this relationship between the government and agribusiness. The industry’s profits come both from turning heavily subsidized commodity crops like corn and soybeans into value-added goods like high fructose corn syrup and soy milk, and from exports into the global commodity marketplace.

This has been instrumental in creating a food system saturated with highly processed goods lacking in nutritional value. It does a poor job of nourishing people while providing an abundance of cheap calories. Moreover, it pads the pockets of a minority of farmers and transnational corporations like Bayer and ConAgra.

Can the vertical farming industry challenge this hegemony? To see one of the new farms up close, I scheduled a visit to AeroFarms, a 78,000-square foot facility in Newark, New Jersey. I arrived at the site early in the morning. I found a landscape where nothing was growing. A massive off-white box constructed of corrugated metal siding sat set back from the sidewalk. It was unmarked.

Adjacent to the site at 212 Rome Street is US Route 1, the eastern boundary of Newark’s Ironbound District — named for the two railroads and two highways that define its limits. Behind the big white box was a massive shed filled with dirt, a wall covered in graffiti, and nothing else. Across the parking lot was a cinderblock bungalow with yellowed glass windows and an AeroFarms logo on the door. I peered through a window but saw no one.

Around the back of the sheet metal structure was an unmarked door. I opened it and found myself in a small room that welcomes workers and visitors alike. There I was greeted by Marc Oshima, the chief marketing officer of AeroFarms.

Before I could enter the heart of the operation, Oshima had me take off all jewelry, sign a food-safety compliance form, don a hairnet and navy-blue disposable lab coat, pass through a clean room, like the ones found in computer-chip factories, walk over rubber mats doused in sanitizer to remove harmful bacteria from the soles of my shoes, and finally wash my hands.

The procedure was an everyday routine for Oshima, the kind of executive who wears Oxfords with brightly colored laces and skips a tie. Several employees were getting to work around the same time and followed the same steps. We filed through a set of swinging doors and into one of the grow rooms.

Pictures of vertical farms often feature an array of magenta and cobalt-blue LED lights more reminiscent of a nightclub than a farm. These are for demonstration only: In reality, the beds are lit with LED light that appears bright white to the human eye, but in fact emits the pink and blue wavelengths that fuel microgreen growth. A few of the beds were unlit. The lights aren’t on all the time, Oshima explained. The grow room stays at an ambient 70 degrees. Huge fans whir in the background; nevertheless, the room smells like an aquarium and the air is similarly humid and dank.

The crops are planted in beds about 80 feet long and 5 feet wide. Farmers — who wear starched white lab coats — germinate the seeds in a reusable fabric. The seeds nestle into the off-white fleecy fiber that strikes a balance between breathability and structural integrity.

In newly-seeded beds, the sprouts perk up every half inch or so, stimulated by the intense light. When the greens are ready for harvest, the surface of the bed resembles a sea of green leaves. The plants’ roots dangle into a basin below, treated with a nutrient-dense mist and oxygen delivered through aeroponic technology. The mechanism that releases AeroFarms’ signature mist is hidden from view inside a black plastic tub called the solutions chamber.

The beds stack on top of one another into towers 12 stories or 36 feet into the air. Each vertical unit has its own computer that monitors all aspects of the plants’ growth. A control-panel box houses the wires, cables, and connections that feed into a touch screen displaying data for every inch of every bed.

Accordion platforms lift employees inspecting greens up into the air, where they perform maintenance tasks in response to computer-generated warning signs. This allows for directed and efficient crop management; human observation complements the digital monitoring. A machine harvests and packages the greens once they’ve reached baby maturity.

Given access to ample renewable energy to power the LED lights, the grow system can function with a great deal of independence from the environment. Its computer-controlled grow systems and automated harvesting and packaging chains mean the food supply need not rely on an uncertain workforce. The food safety measures that control who and what enters the growing facility reduce the risks of contamination and foodborne illness. AeroFarms — and its competitors — do not use agrichemicals such as pesticides and herbicides. And vertical farms can bring food production to the inner city.

Did you know that #plants do not need the #sun to #grow? What they really need is… https://t.co/IenyFb89bt pic.twitter.com/Er4xZHVdFe

Among indoor farmers, Dr. Despommier is a guiding light — but the vertical farms in operation today have yet to fulfill his vision. The kind of multi-use and agriculturally-diverse buildings he envisions would require significant investment to design and build. Estimates for multistory buildings hover in the hundreds of millions; retrofitting existing structures is cheaper but still represents a substantial investment.

AeroFarms’ beds may be vertical, but the entire operation sprawls out horizontally. It is, for now, more indoor farm than vertical farm. Its Dream Greens grow in the heart of Newark — a city that still rumbles with the aftershocks of deindustrialization and the environmental threats of industry — but funnel into distribution networks up and down the Eastern Seaboard. It doesn’t quite fit Despommier’s zero food-miles vision.

Leafy greens have become the poster child for efficient urban indoor agriculture. Unlike most other crops, farmers can sell the whole green plant, except for the roots. By contrast, a cherry tomato requires growth of the entire plant (stem, leaves, blossoms) before bearing fruit.

Whether indoor farming will prove viable for a range of crops is a basic, and unanswered, question. Imagine growing wheat, rice, corn, or soy in a system where photosynthesis (via artificial light) is expensive.

Getting Off the Grid

Solving the renewable energy problem is at the forefront of development for vertical farmers. AeroFarms uses hydropower and solar energy — it even has a farm in Saudi Arabia that pulls water out of the air through reverse-osmosis technology. But before cities can become energy-efficient urban jungles, engineers have to produce the means to get off the grid. The drive to render indoor farming entirely independent of its environment has pushed the concepts behind vertical farming to the stratosphere — literally. Freight Farms, a company that upcycles shipping containers into portable vertical farms, just announced a partnership with Clemson University to explore deep-space applications of its technology. The collaboration is made possible through a NASA grant to explore a “Closed-Loop Living System for Deep-Space ECLSS with Immediate Applications for a Sustainable Planet.”

While container farms reach for outer space, cities will continue to urbanize at unprecedented rates. The droughts, floods and climate inconveniences that have already begun to exert pressure on commercial and family farmers alike will intensify.

Meanwhile, most of the the farmers raising food for people are small, conventional operations that struggle with minimal public support in a low-margin, high-risk business. Research and development funding for the majority of American farmers growing fresh fruits and vegetables is virtually nonexistent — families or individuals own almost 83% of the farms growing vegetables in the US.

The 2014 Farm Bill inaugurated microloan and grant programs for small and beginning farmers: whether funding for these programs will continue is up for debate as Congress considers the 2018 Farm Bill. Sonny Perdue, the current Secretary of Agriculture, is an agribusiness veteran.

Vertical farmers see themselves sidestepping both the vice-like grip of Big Ag and the insecurity of small-scale farming. They bring fresh, unprocessed foods to the hearts of cities independent of the industry lobby or the inconsistencies of farmers’ markets. Production is controlled and abundant enough to tap into existing supply chains. By distributing to supermarkets and online delivery platforms, they eliminate the distribution challenges many small farmers face. And, at least for the present, they receive ample funding from venture capital and private equity, untethered by the limits of public support.

Given the looming threat from climate change and ever increasing urban populations, it’s clear that both the current farm-to-table system and Big Ag fall short. Yet the new money from venture capitalists brings its own constraints. In fact, Despommier’s condemnation of agribusiness may best describe the conflict: behind their presentation as mission-driven companies passionate about making good food widely available, they are in it to make money.

There is little precedent for how the model will behave as companies scale up and diversify. Public investment in research and development could provide some answers. Calls to action range from implementing new urban agriculture and technology programs at universities to reworking city tax structures to support the new urban farmers through subsidies and tax credits. The growing urban and climate-insecure populations that vertical farmers hope to feed will need more than the production of leafy greens. But for now, the logic among vertical farmers amounts to a hale and hearty Let them eat kale.