Who’s After Rare Metals in the Klamath Mountains?

This story by Theo Whitcomb originally appeared in High Country News and is republished here as part of Covering Climate Now, a global journalism collaboration strengthening coverage of the climate story.

When Interstate 5 was built in the 1960s, it sliced through southwest Oregon’s Klamath Mountains, exposing their metamorphic innards. To Michael Cope, the brawny founder of American Mineral Research (AMR), this layer cake of mineralized rock proves that Josephine County is sitting on a cache of valuable rare metals — and his small company hopes to eventually free up the resource so that it can be used in solar panels.

In early May, I met Cope on the shoulder of an I-5 off-ramp. The rain was sporadic, and we hurried across the road so that he could show me where he’d found gold a few years back. Neither of us had rain jackets, and when it began to hail, Cope looked up and asked God to stop the downpour. It stopped minutes later, and I laughed as the spring sun came out, highlighting rusty ochre and deep maroon rocks. Some had a navy-blue tinge, others a slight purple — a sign that the area is mineralized and a possible site not just for gold, but for tellurium, a rare metal increasingly useful as a semiconductor material in the solar and battery industry. It’s a metal that is now included on the Department of the Interior’s “critical minerals” list.

Cope interrupted his own monologues with excited outbursts whenever he found an interesting rock. He was able to read the geology in a way I could not. A few rocks at his feet were serpentine green. “This is what you’re looking for right there,” he said. “It’s the blues, the dense rock. What your feet are on… all of this is what we looked for on road cuts and [Bureau of Land Management] roads.” He cracked open colorful rocks one by one with a small hammer and smelled them for sulfur. After scrutinizing the insides with a small magnifying glass, he pointed out tiny flecks of metal, shimmering in the sun. “Fool’s gold,” he guessed.

Cope has found tellurium on AMR’s properties, confirmed by lab tests he shared with me. And he and his partner, Jay Meredith, an investor and the former city accountant for Grants Pass, OR, recently got a permit to look for rare metals on a county-owned parcel near the towns of Placer and Golden. 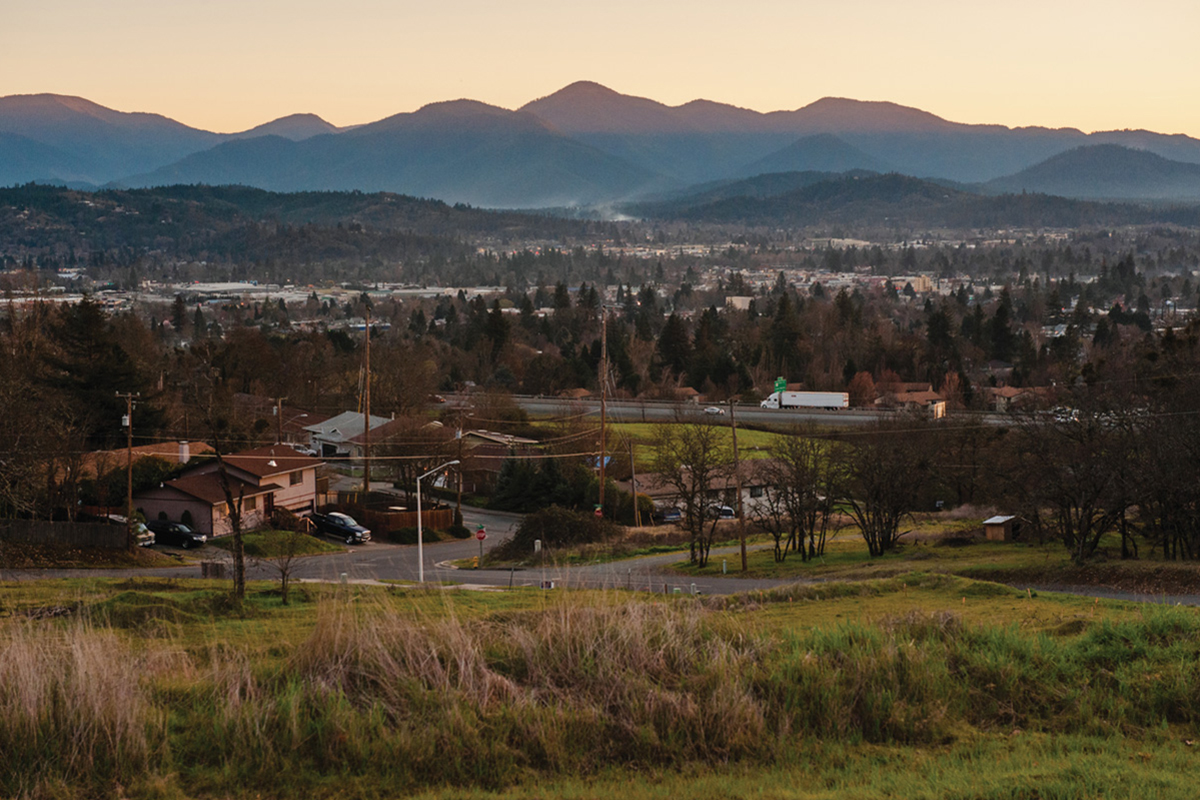 But despite the glimmer of possibility, AMR’s quest could prove quixotic: Mining in the area is nearly nonexistent, smothered by global competition and an expensive regulatory environment. Cope still holds out hope for these knotted, colorful rocks; he’s fixated on the unique geology of the Klamath Mountains and the hidden riches it may hold. “It’s just sitting here waiting for people to take advantage,” Cope told me, looking out at the forested hills sprawling southwest toward Grants Pass. “We’re the State of Jefferson. The way I look at it — we could be the wealthiest state ever.”

For rural towns like Grants Pass, extractive industries paid the bills during the 20th century. Timber provided a large share of the county budget; by the 1990s, it accounted for well over 40 percent of the funding, underwriting roads, schools, and law enforcement. But once the industry was automated and consolidated, everything changed; the number of sawmill workers in Oregon fell from 25,500 in 1969 to 18,500 in 1989.

By the mid-’90s, then-President Bill Clinton’s Northwest Forest Plan curtailed public-lands logging, and Josephine County’s budget was gutted. “Timber payments … created a really hard situation for local governments in Oregon specifically,” said Kris Smith, a researcher at Headwaters Economics, an independent research group. The area was “stuck in a downward spiral of not having enough money to pay for your everyday needs in local government,” Smith said.

“We’re the State of Jefferson. The way I look at it — we could be the wealthiest state ever.”

Since then, Josephine County has had to remake its economy. Visitors raft down wild and scenic rivers, patronize local vineyards and restaurants, or buy weed from cannabis farms. But now, wildfires, heat waves, and smoke threaten the tourist season. Grants Pass, for instance, was ranked fifth in the nation for poor air quality this year, largely due to wildfires. And the area’s socioeconomic problems are chronic: The median income and educational attainment consistently lag behind state averages, and the industries that have replaced timber — including health care and tourism — are generally either low-wage or seasonal, or both. The county mirrors a nationwide trend, with the fastest growing sector being the health-care industry, which accounts for 18 percent of jobs. Retail comes in second at 13 percent. Lack of housing in its biggest city is also acute: The rental vacancy in Grants Pass is below 1 percent, and Kelly Wessels, the former director of the United Community Action Network, estimated that the percentage of fast-food workers living without shelter was roughly 25 percent in 2020.

When I spoke with Josephine County Commissioner Dan DeYoung this spring, he had a long list of grievances, including the environmental regulations he sees as hampering his county’s ability to extract resources. As a member of the county’s mining advisory, he has fought them at every turn, complaining that the resources have been “locked up.” But he’s also skeptical that a company like American Mineral Research can launch a new era of extractive wealth there. “I don’t know of any private company that could ever pull it off,” he said. “Not in today’s environment.”

Still, new-energy metals could be a possible way out of the economic purgatory DeYoung describes. He aided AMR by weaving a statement from Cope and Meredith into a testimony before the US House Natural Resources Committee. For years, they’d tried to attract the federal government’s attention, even suggesting at one point that the Trump administration christen the area the “Trump Mineral Belt.”

New extractive frontiers may indeed open up as the Biden administration attempts to transition the nation away from fossil fuels. The administration slipped $500 million into a military spending request to “expand domestic production of critical minerals” to secure energy and mineral supplies.

The Klamath Mountains are known to hold useful metals like cobalt, nickel, and bismuth, but geologists still see the development of tellurium as a long shot. The rare metal is produced cheaply in China and Texas as a byproduct of copper smelting. But AMR hasn’t stopped trying. The company says it has a plan to mine tellurium alongside gold, noting the long-term growing demand for rare metals. When I asked Meredith if he thought tellurium development could cure the county’s budget woes, he was emphatic. “Absolutely,” he said.

“That’s where big, big dollars could be available in the long term.”