What Is a Sustainable Diet?

If you’re hoping to eat more sustainably in 2023 but are unsure of where to begin, you’re not alone. A new qualitative study of 21 mostly young adult UK residents found that among participants willing to make dietary changes, uncertainty around definitions often stands in the way.

A better collective understanding of what makes a diet “sustainable” might help but before we get to the definitions, it’s important to keep in mind that dietary change is just one component — though definitely a necessary one — of the kinds of food system change recommended by researchers.

In this piece, we focus on individual dietary change, but household-level changes must take place alongside changes to how we farm, climate scientists say. What’s more, consumer-facing institutions like grocery stores, school cafeterias, and restaurants can have a larger collective environmental impact by shifting purchasing choices and food waste practices.

But back to dietary change — here’s how four leading organizations define a sustainable diet. The big takeaway? If you live in the global north, you should aim to eat a lot less red meat. What to eat instead? Plant-based burgers might taste more like meat, but the healthiest plant-rich options are legumes, nuts and fruits and vegetables.

The UN’s Food and Agriculture Organization, otherwise known as the FAO, defined a sustainable diet back in 2010, highlighting foods with “low environmental impact” that support improved “nutrition” and a “healthy life.” More precisely, a sustainable diet protects and respects “biodiversity and ecosystems” and is “culturally acceptable, accessible, economically fair and affordable; nutritionally adequate, safe and healthy; while optimizing natural and human resources.”

But what does that actually mean in terms of what you should eat? In a 2016 publication called Plates, pyramids, planet, researchers surveyed countries that include sustainability in their food and nutrition policies, and found widespread agreement around this recommendation: eat less meat and more plants.

Environmental goals are not enough, the authors noted. Food justices is a critical part of a sustainable food system too, including better conditions for farm workers, for example.

Published in 2019, the EAT-Lancet Commission based its dietary recommendations on two broad areas of research — human health and planetary health — and recommended a significant dietary shift of doubling healthy food intake, including fruits, vegetables, legumes, and nuts, and reducing added sugar and red meat consumption by more than 50 percent in the global north.

While there was and continues to be plenty of debate around just how much meat, if any, is healthful to consume, there’s more than ample evidence showing the health benefits of eating plenty of fruits and vegetables, legumes, and whole grains. The commission recommends “no more than 98 grams (3.5 ounces) of red meat (pork, beef, or lamb), 203 grams (~7 ounces) of poultry and 196 grams (~7 ounces) of fish per week.

The World Resources Institute offers a number of science-backed recommendations for growing enough food to feed a growing global population without harming the planet, including a mix of industry-side strategies like genetically engineered crops and nature-based solutions like rewilding. WRI also includes dietary change in the mix of solutions it recommends, with specific advice for people who live in the global north — who eat far more than the global average — to reduce their meat consumption to around 1.5 burgers per week or less.

The climate organization Project Drawdown also includes a plant-rich diet in its suite of climate solutions and defines it as follows:

Project Drawdown also recommends buying local where possible, but it’s important to think about what you’re buying. In terms of just lowering your greenhouse gas emissions however, eating less red meat is going to be far more effective than eating locally grown food. 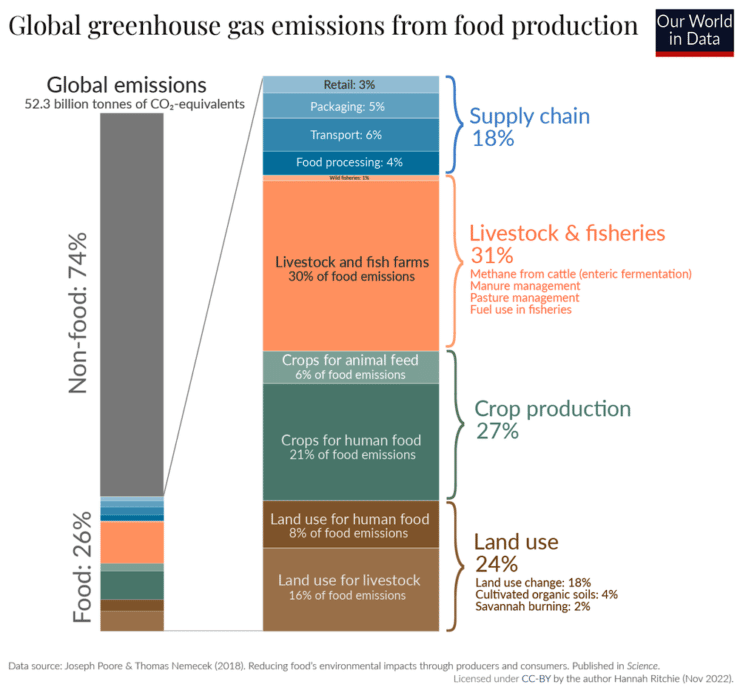 As demonstrated by Hannah Ritchie at Our World in Data, supply chains account for 18 percent of global food sector emissions, with transportation making up just 6 percent. Meanwhile, livestock and fish farms account for 30 percent, and land use for livestock another 16 percent. There are a couple types of food where transportation matters more, like air-freighted fruit, and there can be other reasons to buy local too. Local farmers markets are an excellent way to support businesses — particularly farmers who provide food as mutual aid to the community and pay their workers well.

The definitions above say nothing about conditions for farm animals, which brings up a dilemma for anyone trying to eat less meat in an ethical way. To reduce climate emissions, it makes more sense to focus on beef, as beef is a much bigger emissions culprit than poultry or pork — to be clear, however, both are higher than any plant-based protein, including soy and lentils.

Poultry and pork farms — especially industrialized chicken operations — tend to be much worse for animal welfare, as broiler chickens are packed together in very small barns where they live just 6 to 7 weeks. And there are other impacts to consider too, like water and air pollution, contract farmers, and workers.

The biggest takeaway is that the more you can shift to a healthy plant-rich diet, the more you can reduce all of these impacts for the better. To get started, take a look at Sentient Media’s Take Action guide.

This story by Jenny Splitter was originally published by Sentient Media and is part of Covering Climate Now, a global journalism collaboration strengthening coverage of the climate story.