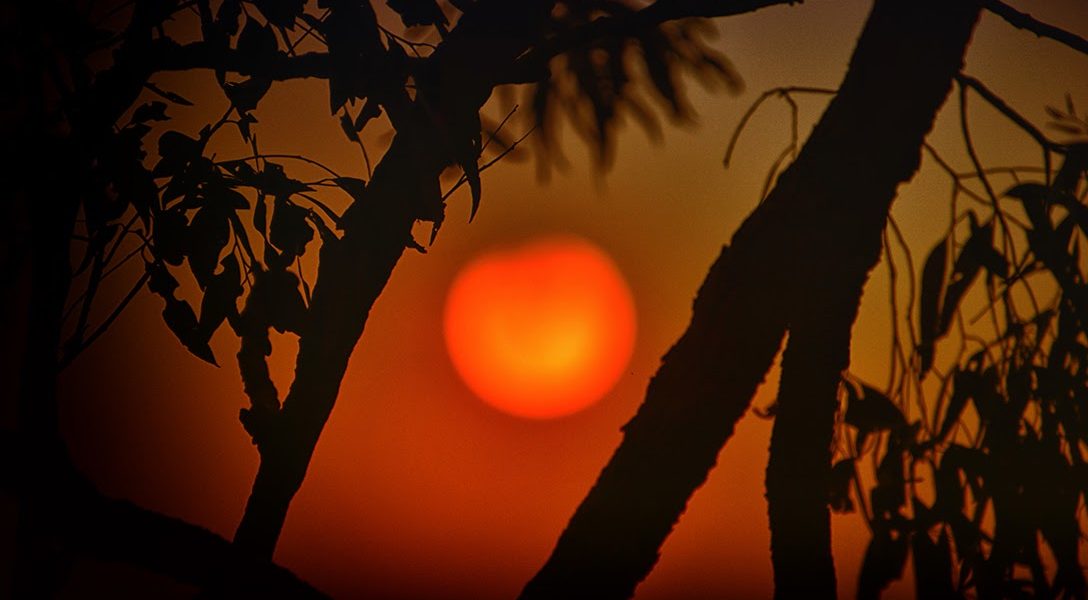 This is a firsthand account from our local correspondent

SOUTH EAST AUSTRALIA – We have been under heavy smoke for five weeks now and surrounded by fire. I think the total number of houses lost in the south is close to 5,000 from  last month, 2,000 or so in my state of New South Wales alone.

The whole great dividing range is on fire. On New Year’s Eve the beach at Batemans Bay had 4,000 people on it — trying to get into boats, or walking out into the water. The fire burned to the sand’s edge. Along the coast many other beaches were the same. People drove their cars into Lake Conjola, parked on the mud flats at Narooma. A lot of people died.

We have had a reprieve of a couple of cooler days, but the fires keep burning — they’re just not moving at terrifying speed anymore. But tomorrow the temperature will be 42 degrees Celsius (107.6 Fahrenheit) with gale force winds. The fire behind my house will flare up and so will all the others. New Year’s Eve was only 35°C, and the winds not as strong.

Canberra is in a “state of alert” with evacuation centers set up. The states of New South Wales and Victoria have both declared emergencies. Near my place, there are orchards with fruit boiling on the trees. The two major rivers, the Shoalhaven and the Mongarlowe, have stopped flowing. There are grasshoppers flying before the fires in plague proportions. In the forests the flames are 100 meters high in places — the roots of trees are incinerated, leaving deep hidden holes of burning ash.

The smoke from the fires is rising high enough to create pyrocumulus clouds. These clouds are producing rain and lightning, sucking in the moisture from the atmosphere and condensing it as rain — rain and ash — black rain.

In the grasslands the fires produce their own wind — wind in every direction. They become gigantic twisters, like fire tornadoes. One of them picked up a 10 ton fire truck the other day and threw it, killing the driver.

Sydney and Canberra, and other cities too, are under a shroud of smoke. Yesterday Canberra was the most polluted city on earth — normally it is pristine. Nobody can breathe unaided. We are in gas masks day and night. We sleep in gas masks. Our eyes stream. Hundreds of people are admitted to emergency wards for asthma and other respiratory illnesses.

At the height of these fires, Scott Morrison, the Australian prime minister — the same man who brandished a lump of coal in Parliament last year sneering “Who’s afraid of coal?” and who last month tried to make it a criminal offense to protest government inaction on climate change, took a family holiday in Hawaii.

As the situation escalated into a crisis, he took a moment to tell us all we should be ashamed of ourselves trying to talk about the climate at this time. He stayed on holiday. Eventually, when protesters ringed his house in Sydney, he cut his holiday short by one day — one day — and came back, announcing on his arrival that the government intended to make no changes to its policies. He did not pick up a fire hose, did not build a containment line, did not help an old person to evacuate, did not hold a weeping child whose home had gone up in flames.

But while we wait for our chance to vote him out, the country burns. Without the trees on the great dividing range, nobody really knows what will happen to our climate… to our air. In the desert, temperatures already get well over 52°C (125°F). I know because I’ve been in them. The film in my cameras melted and all the electronics shut down — that was before we lost the trees.

This fire apocalypse is the biggest natural disaster anyone has ever seen in Australia — and we are the canary in the coal mine for the rest of the world. If this has happened here, it will happen in other places too. People are dead, homeless, burned, frightened, suffocated with smoke. Our government was told over and over. The firefighters told them, the scientists told them. Nobody listened.

There is no water left in the supermarkets, no water in our tanks. Water companies can’t reach us and, even if they could, local councils have passed laws preventing those companies from taking water outside the towns.

Tomorrow everyone in my region will fight catastrophic fire storms with whatever water they have left in their tanks. We have become experts in fixing water pumps. There are vigilante firefighting groups appearing — guys with water containers on the backs of pickup trucks.

Twenty-eight people went missing today in the Victoria fires. Every state is burning. Now climate scientists say we are the first sign that the climate has tipped, that we have reached an irreversible point. It feels like that. People are sleeping in cars, and there are signs everywhere telling us where to evacuate to.

By this time tomorrow, my house may be ashes. Nobody knows if they will find a safe road on which to evacuate. Our world is ending, my friends… We are seeing the very worst of our scientific predictions come to pass in these bushfires.