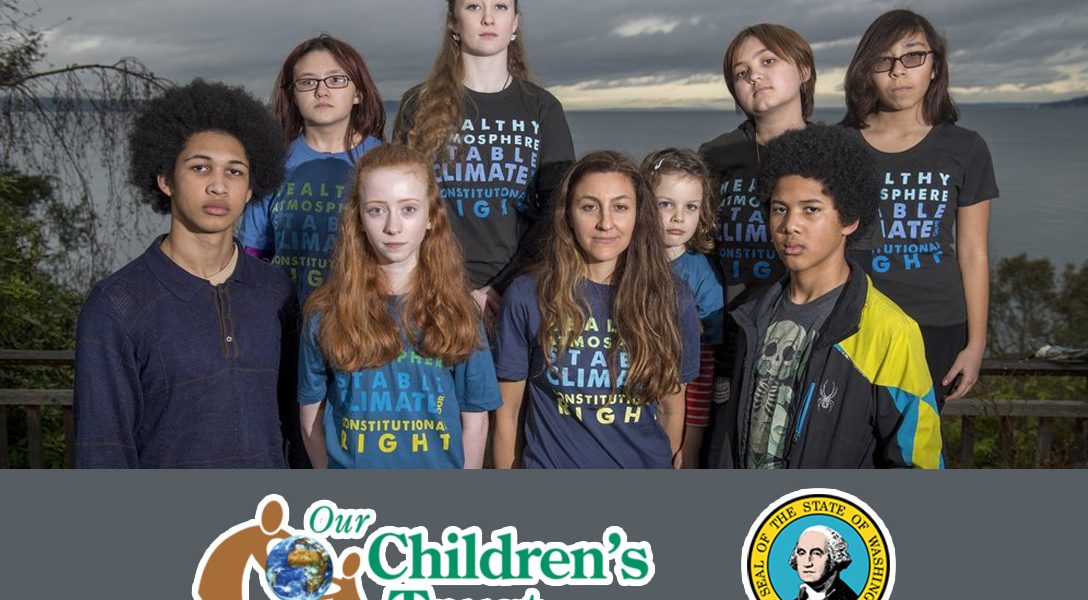 As wildfire smoke clouded the skies of Seattle, a Washington judge ruled Tuesday to dismiss a lawsuit against the State of Washington filed by a group of young climate change activists — who range in age from 8 to 18.

The ruling, handed down by King County Superior Court Judge Michael Scott, supported the motion submitted by the State of Washington to dismiss the lawsuit. Judge Scott ruled that the case raises political questions that cannot be resolved in a courtroom, but rather should be addressed by the legislative and executive branches of the government.

The lawsuit, Aji P. v. State of Washington, was originally filed in February by Our Children’s Trust, a nonprofit group specializing in supporting legal actions, on the part of the 12 young activists from Washington.

It alleges that the State of Washington has endangered the lives of the plaintiffs through the continual operation of a fossil-fuel-based transportation system.

The suit claims that the defendants knowingly contributed to creating harmful climate conditions that the plaintiffs have to live in. The plaintiffs sought primarily for the court to rule that citizens have a right to a safe and clean climate, and to see that the state government fulfills its obligation to provide a clean environment.

Judge Scott’s conclusion is that there is no constitutional right to a clean environment in Washington — nor is it appropriate for the courts to order the legislative and executive branches to produce and implement an exhaustive plan to clean up Washington’s environment.

As WhoWhatWhy has previously reported, a separate court ruled in 2017 that the Constitution mandates to citizens the right to a life-sustaining climate, and that it is the federal government’s obligation to preserve it.

Judge Scott noted that he hoped his dismissal of their case would not discourage the activists. In his decision he wrote: “The young people who are the plaintiffs in this case can (and must) continue to help solve the problems related to climate change.”

Aji P. v State of Washington follows up on the 2015 victory for youth climate change activists in Foster v. Ecology, in which the courts ruled that the State of Washington was not meeting thresholds to provide a safe climate for its constituents. Both Foster and another suit currently before the courts, Juliana v. United States, are also supported by Our Children’s Trust.

Though the ruling is a clear setback for the young climate change activists, Our Children’s Trust does not intend to give up the fight. Not only is Juliana set to go to trial in October — after the Supreme Court denied the Trump Administration’s motion to dismiss it — but the youth activists and their allies at Our Children’s Trust also plan to appeal Tuesday’s decision and continue the battle in higher courts.

The group’s initial statement on the ruling cited “pronounced departures from proper judicial procedure and consideration of Plaintiffs’ claims.” A more detailed response is slated to be released soon.

Andrew Welle, the plaintiffs’ co-counsel, stated: “The plaintiffs intend to continue the pursuit of their urgent constitutional claims by appealing Judge Scott’s decision to Washington’s appellate courts.” Welle went on to say,

The United States Supreme Court recently ruled that similar claims against the federal government must advance to the trial stage, affirming that the judiciary has a duty to resolve constitutional claims of this nature. Given the urgency of climate change and the important constitutional issues involved, the political branches of government cannot be immune from liability for the constitutional climate crisis of their own making.

In addition to appealing the court’s decision, many of the plaintiffs in the Aji case will be doing double-duty in Washington, as they are also plaintiffs in the Juliana v. United States suit going to trial there in the fall.

“This summer alone, increasingly dangerous wildfires throughout the United States have destroyed communities and families, polluted and clouded our air, and taken human lives,” said 17-year-old Wren Wagenbach, a plaintiff native to Seattle. “This is not the environment I believe any American deserves. What American youth deserve is to have their futures protected in our courts of law.”