Wall Street Is Thirsting for Your Water

In 1865, the final year of the American Civil War, a man named David Noble Smith started collecting water from a spring located near a peculiar rock formation resembling an arrowhead in California’s San Bernardino mountains. At the time, this was a few days’ horseback ride from a dusty and obscure place called Los Angeles.

By drawing water from Strawberry Creek before any other white person, Smith staked a claim to owning the water, in the same way other white settlers seized rights to mine in the mountains or farm and ranch in the flatlands: simply by showing up.

Though he was dead by the late 1880s, Smith’s legacy in 2021 is more consequential than legendary Old West robber barons like Leland Stanford. Instead of trifles like railroads and a university, Smith invested in a resource that is invaluable. You just might be drinking “his” water out of a plastic bottle as you read this story. That’s because the water from Smith’s 1865 claim is now sold under the brand Arrowhead, named for the odd rock face visible from downtown San Bernardino. And the rights to that claim — bought, swapped, sold, and resold for the next 156 years — are now part of the investment portfolio of a New York City private equity firm called One Rock Capital Partners.

While water in the West becomes scarcer and droughts more frequent and more severe — thanks in part to changing weather patterns and rising temperatures triggered by carbon emissions — Wall Street views water as an “asset class,” a commodity like stocks, bonds, and real-estate that can generate enormous returns for shareholders, even in severe droughts. Or maybe, especially in water shortages.

Institutional investors like One Rock are snapping up water rights just like others are snapping up rental properties to lease back to Americans at a profit, as The Wall Street Journal reported in April and as a viral Twitter thread outlined earlier this month. Both can be seen as examples of “rentier capitalism,” in which the owner of a commodity can charge more for delivering the same service if there is less supply.

The implications are staggering. Human life requires clean water. But water is also an excellent investment that, under current market conditions and legal controls, could be monopolized. And existing government controls over crucial human needs like water, which still run on the same creaky framework David Noble Smith used to claim the water in Strawberry Creek, can’t do much about it.

The “key issue,” according to Richard Frank, a water rights expert and law professor at the University of California, Davis, where he directs the California Environmental Law and Policy Center, is a question of ideology: “Whose water is it?”

“Private equity firms are seeing water markets as an opportunity to make money, and the people who would like to commoditize and treat water as a private commodity to buy and sell really don’t care about a healthy potable water supply for people.”

In California, the state Constitution declares that  water “belongs” to all citizens, and the 1914 Water Commission Act grants the state the authority to regulate access for the “public good.” But fierce legal challenges curtailed the Water Commission’s power to curtail pre-1914 water claims like Smith’s. So, private enterprise just pays the government nominal fees to draw that water, based on the antiquated 19th-century legal frameworks that white settlers used to claim property across the frontier.

In One Rock’s case, it pays the US Forest Service $2,100 a year to draw the water from Strawberry Creek using a network of tunnels and boreholes. As legal basis for this claim, the company presented a trove of ancient documents, including Smith’s 1865 claim. That fee was imposed in 2018. Before that, One Rock’s predecessor, Nestle SA, tapped Strawberry Creek for less than $600 a year — and for 26 years used a permit that had expired in 1988.

Irrigation districts that supply California’s agriculture industry and municipal water districts, and provide drinking water and electricity to San Francisco and Los Angeles, all rely on a patchwork of staked-out claims like Smith’s.

All this “gets to the heart of one of the most difficult and unresolved California water problems: the water rights system we have is antiquated: designed and implemented a century ago for a world that no longer exists,” said Peter Gleick, the director emeritus of the Pacific Institute, an Oakland, CA-based water policy think tank.

Despite the increasing frequency and severity of droughts and the demands of a state with nearly 40 million people, there has not been a push to reform or reassert public control over water resources, or for the federal government to take over management from states. This is partly because private entities with existing water rights, like One Rock, are sure to mount lengthy and costly legal battles and demand compensation under a takings clause claim. They’ll also stick Americans who might have no water or dirty water coming out of the tap with a ballooning bill for the clean water they own, which Nestle SA did in Flint, MI. “It’s very scary,” Frank said. “This commoditization of water, how I phrase it, is very concerning.

“Private equity firms are seeing water markets as an opportunity to make money, and the people who would like to commoditize and treat water as a private commodity to buy and sell really don’t care about a healthy potable water supply for people,” he added. “That’s the next big looming issue in the American West, in my opinion.” 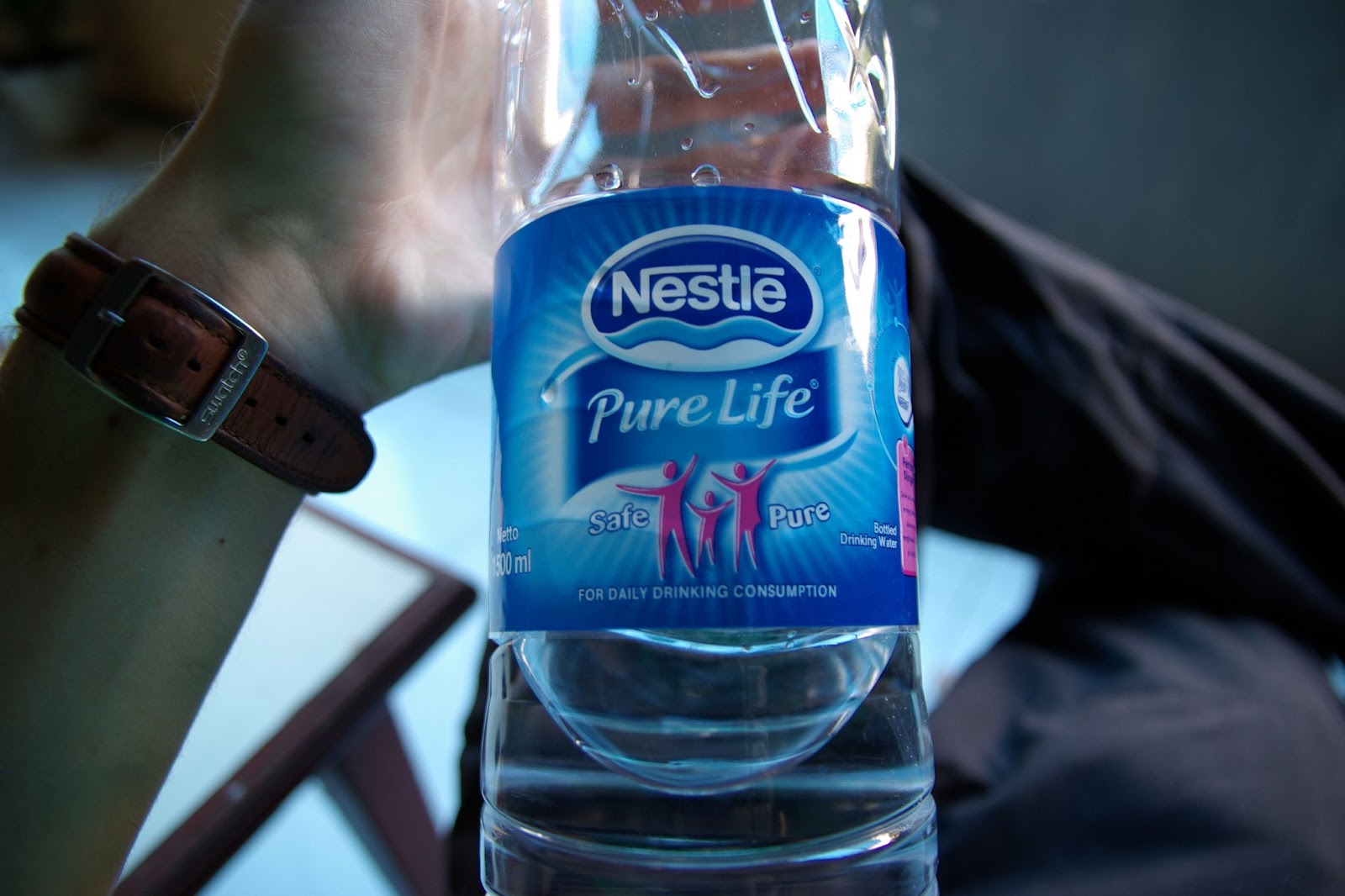 In February, One Rock agreed to pay $4.3 billion to acquire the North American bottled water operations of Nestle SA, then-owner of Smith’s water rights, plus a host of others, including Poland Spring and Deer Park. In a tacit nod to Nestle’s status as a toxic brand, One Rock renamed its water division Blue Triton, a reference to the Greek god that “reflects the Company’s role as a guardian of sustainable resources and a provider of fresh water,” One Rock said in a press release.

Last year — the fourth driest year in California since 1877, when record-keeping began, and the first year of the second severe multi-year drought in the state in less than a decade — Nestle drew 58 million gallons from Strawberry Creek, a tributary of the Santa Ana River that provides the drinking water for 750,000 people downstream.

In April, following a five-year investigation, regulators at the California State Water Resources Control Board issued a cease and desist order. The agency believed One Rock/Blue Triton/Nestle was entitled to no more than 2.4 million gallons; in its rebuttal, the company claimed authority to 88 million gallons.

The dispute will now head to a future, not-as-yet scheduled, Board hearing — and a major test of the government’s power to regulate water. The board could vote to curtail One Rock’s water rights. If that happens, a major lawsuit is surely imminent. All this is complicated by the fact that some federal courts have taken a water-as-private-property point of view pushed by big agriculture and the lawmakers who represent them, Frank said. Ultimately, a Supreme Court with a conservative majority could adjudicate who owns California’s water.

The last five-year drought, between 2012 and 2016, did not prompt any reform to the 19th-century water claims system. This time around, despite vanishing reservoirs and a third of the state in “extraordinary drought” conditions, Gov. Gavin Newsom (D) has not yet even imposed statewide water-use restrictions.

One Rock could flip its new water rights to another entity — maybe one with enough wealth and ambition to try to buy enough water rights to corner the market. Americans already can’t afford their water. Households currently owe about $28 billion in unpaid water and power bills, researchers from the University of California, Los Angeles reported earlier this year. Californians alone owe $1 billion in unpaid water bills. What if a private owner could cut off the tap — or demand steep compensation for the same supply?

The vision of a future in which a titan of capital like Amazon owns the country’s water rights and leases it back to Americans for profit isn’t dystopian hyperbole. It is possible, and it is legal — and it is in its first stages.

“As long as private companies can extract and mine public water for a minimal fee, while turning it into a costly private commodity to sell back to us, we will see more and more privatization, commodification, and commercialization of water,” Gleick said. “That’s a dangerous prospect given our severe water challenges in the western US.”