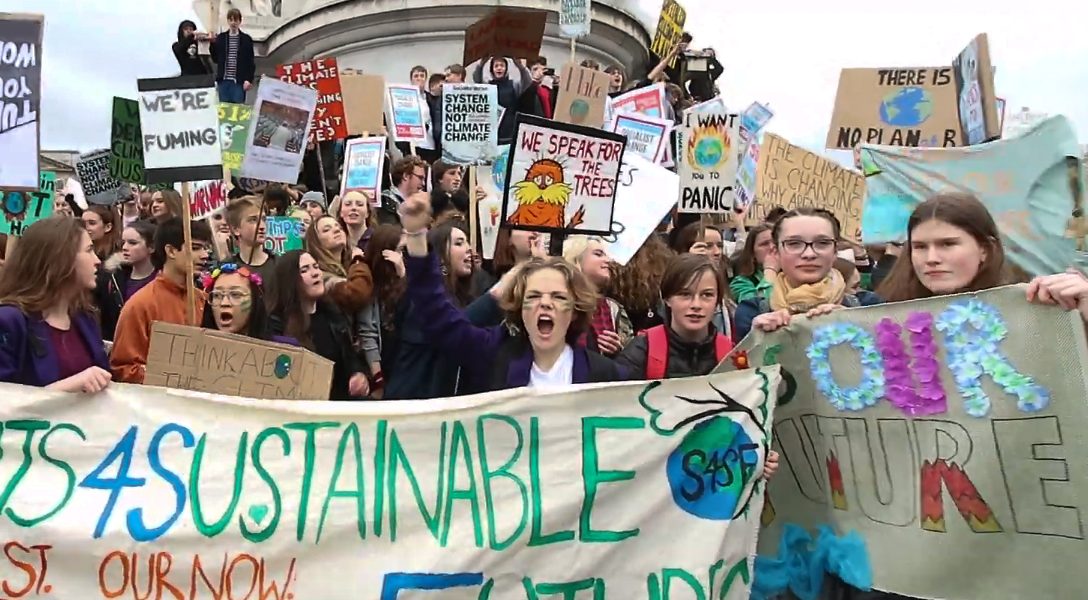 The US movement drew inspiration from school strikes in Europe. The strikes began after 16-year-old Greta Thunberg demonstrated in front of the Sweden Parliament every Friday last year.

Alexandria Villasenor, 13, co-founder of Youth Climate Strike US, has demonstrated alone in front of the United Nations headquarters since December.

Villasenor was born and raised in California, where she experienced the impact of extreme drought and wildfires. After learning that climate change was the main factor behind them, she felt impelled to act.

“If your child was trapped in a room that was getting hotter and hotter, risking the life of your child, what would you do?” Villasenor said during the protest in Central Park West. “You turn it off. We are trapped and the time has come for you to turn the furnace off and save us all.”

New York students held protests at several locations. First, they went to City Hall in Brooklyn, and then to Columbus Circle in Manhattan. From there, they marched to the American Museum of Natural History on Central Park West.

As they passed the Trump International Hotel and Tower, some students chanted an obscenity and extended middle fingers. Protesters wanted to lie down in the streets but police didn’t allow them to do so.

They carried  signs reading, “There is no planet B”; “The youth have spoken. Are you listening?”; “Change not climate change”; “There’s no place like home” (with the Earth drawn in place of an “O”); and  “When kids skip school to protest, there’s something wrong.”

During the protests, many students cited scientific research warning that the Earth has only 12 years left to avert climate change, and emphasized how older generations didn’t do anything, or don’t even believe in global warming.

“They can’t ignore it anymore,” said Vivian Gore, 13, student from PS 39 in Brooklyn, at the City Hall protest. “They have generations of blood under their hands [sic] if they keep ignoring it. It’s science. It’s pure facts.”

The United States is the second-largest producer of greenhouse gases. According to the Environmental Protection Agency, energy consumption in the US released more than 5.1 billion metric tons of carbon dioxide into the atmosphere in 2017. The gas, oil, transportation, and industry sectors are responsible for the biggest jump in carbon dioxide emissions since 2010. In 2018, the US released 3.4 percent more greenhouse gases into the atmosphere, according to Rhodium Group, an economic firm that analyzes global trends.

“Most of you have little choice on how you heat your homes and how you transport,” said Villasenor. “Those choices were made for you by a small group of people who cared more about money than they do about you.”

“[The protest] makes sense because they are the ones who are really going to pay the consequences,” said Leva Zadina, 76, member of 350 Brooklyn, a grassroots organization that tries to educate about global warming.

We must build an international movement to take on the fossil fuel industry and leave a planet that is healthy and habitable for future generations. Today the young people of the #YouthClimateStrike are leading the way. Thank you for your courage.

Many politicians have shown support for the movement — among them Democratic presidential candidates Senators Kamala Harris (CA) and Bernie Sanders (VT), and former candidate Hillary Clinton.

“We must build an international movement to take on the fossil fuel industry and leave a planet that is healthy and habitable for future generations,” tweeted Sanders. “Today the young people of the #YouthClimateStrike are leading the way. Thank you for your courage.”

Short Videos From Youth Climate Strikes Around the World