This story by Kate Evans originally appeared in Hakai Magazine and is republished here as part of Covering Climate Now, a global journalism collaboration strengthening coverage of the climate story.

Humans have enjoyed slurping oysters’ salty, slippery insides for millennia. The knobbly bivalves grow in oceans and estuaries around the world, where they filter water, shelter baby fish, and fortify coastlines against waves and storms. There are hundreds of different kinds, forming beds and reefs and clinging to rocks from New Zealand’s frigid Foveaux Strait to the tropical waters off Hong Kong. Yet of all these sumptuous shellfish, just a few species have hogged the limelight.

Most of what scientists know about oysters comes from the Atlantic oyster Crassostrea virginica. This temperate species, native to North and South America, has been studied more than all other oysters combined. Globally, cool-water oysters account for 99 percent of commercial production, while those hailing from tropical regions have been almost completely overlooked.

And yet, after reviewing the little research that does exist on reef-building tropical oysters, Marina Richardson, a doctoral candidate at Australia’s Griffith University, has a number of compelling reasons why we should be paying these heat-loving species much more attention.

Many tropical oysters grow faster than cool-water species, reaching market size in less than one year, rather than two or more. Oysters sidestep many of the concerns that plague other types of aquaculture: the animals don’t need feeding; can be grown with simple, low-maintenance infrastructure; and can actually benefit the surrounding environment. When cultivated shellfish spawn, for example, their offspring help to replenish wild stocks nearby. In low-income tropical countries, oyster farms stand to boost food production, provide economic opportunities, and restore degraded shorelines, Richardson says.

Outside the tropics, reef-building oysters are particularly useful for coastal restoration because the bivalves create important habitat for marine invertebrates and fish. “They can also have positive effects on mangroves and seagrass,” Richardson says. But in tropical waters, scientists know vanishingly little about how oysters support other ecosystems. “I couldn’t find a single study that described the fish associated with a tropical oyster reef,” she says.

Richardson was astonished to discover that the tropics have four times as many reef-building oyster species as temperate areas do. “The diversity is crazy,” she says, and new-to-science species are still being described.

The dearth of research has real-life consequences. “There’s some evidence that tropical oysters have declined, but we don’t really know what was there and what’s left,” Richardson says. People who want to cultivate tropical oysters are also groping in the dark, still learning to distinguish different species, as well as disentangling each one’s life cycle and habitat preferences.

To fill the knowledge gap, Indigenous and local communities are collaborating with scientists, governments, and industries to develop tools and techniques that unlock tropical oysters’ latent potential. These projects have pearls of wisdom to share.

On South Goulburn Island, a crescent of red earth slightly larger than Manhattan island located 300 kilometers northeast of Darwin, Australia, members of the Warruwi Aboriginal community have been working with the Northern Territory government to develop an aquaculture industry for blacklip rock oysters. 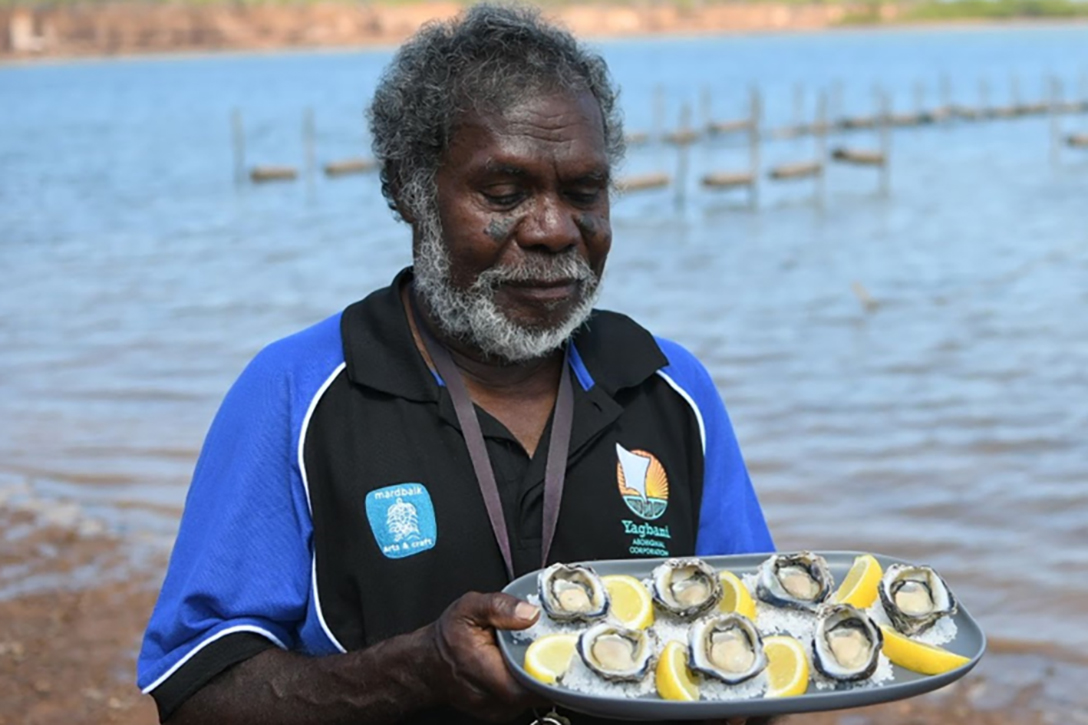 Warruwi elder Bunug Galaminda shows off blacklip rock oysters grown in one of his community’s intertidal farms in Australia’s Northern Territory. Before the operation kicked off, the aquaculture team had to develop a protocol for breeding the species in captivity. Photo credit: Courtesy of Matthew Osborne / Hakai Magazine

For generations, the Warruwi have harvested the dark-edged, mother-of-pearl shellfish from the shores of the Arafura Sea. At low tide, they chisel shells the size of dinner plates off the rocks with screwdrivers, or cover them with dry grass and set the vegetation on fire, smoking and cooking the oysters at the same time. The Warruwi’s aquaculture operation, which has been under development for the past decade, promises to bring jobs and income to the remote community while also tackling recent declines in wild oyster numbers.

Matthew Osborne, a fisheries scientist who has Aboriginal ancestry from the Kaurna and Narungga peoples, oversees the effort for the Northern Territory government. Though the Warruwi community has a long history with blacklip rock oysters, adapting that knowledge to aquaculture took research and experimentation. Their first task for Osborne’s team was to figure out how to breed enough juvenile oysters to populate the farms.

The team set up lab experiments to study the oysters’ life cycle. “For the first 20-odd days of an oyster’s life, they actually swim,” says Osborne. “They’re the size of a speck of sand in the water, and they change shape four or five times before they settle into what’s called a spat.”

In temperate regions, oyster farmers use hatcheries to provide a reliable, year-round supply of spat. They can also breed oysters selectively to improve the stock. But without established techniques for reproducing tropical oysters in captivity, almost all existing tropical producers collect spat from the wild. After years of tests to determine what conditions keep baby blacklip rock oysters happy, Osborne’s team has just published the first hatchery protocol for the species.

At trial farms off South Goulburn Island and Groote Eylandt — farther east in the Gulf of Carpentaria — the young oysters grow in cages suspended from lines stretched across the intertidal zone for two years, until they are big enough to harvest.

Elsewhere, other communities are also beginning to apply an industrial eye to traditional oyster production. In Hong Kong, where tropical oysters have been cultivated for at least 700 years, marine scientists are collaborating with conservationists and the aquaculture industry to restore oyster reefs and study their ecological benefits. The program recently opened a hatchery and began trialing spat production for three local oyster species.

Osborne hopes to eventually help other Aboriginal communities, as well as Pacific nations such as New Caledonia and Fiji, cultivate their own native blacklip rock oysters. “We can make some significant changes for people in remote areas,” he says.

Across the tropics, oysters are ripe for the shucking. “Oysters genuinely are a very environmentally friendly source of protein,” says Richardson. “There’s just not really a downside.”